Although driving in the United States stagnated from 2008 through 2013, mileage statistics from the Federal Highway Administration show driving in 2014 increased by 1.7 percent. Obviously, the drop in oil prices beginning in June 2014 that has lowered both gasoline and diesel prices has had a major effect on drivers’ use of their vehicles. High motor fuel prices have resulted in restricted use of vehicles, while low prices have accelerated their use. Also affecting increased driving in 2014 is that employment levels finally reached their January 2008 peak in April 2014, ending a more than 6-year employment trough—the longest since the Great Depression. Unfortunately for mass transit advocates, this driving hiatus did not increase the use of mass transit, despite the federal government using 16 percent of the federal gasoline tax revenue to subsidize mass transit.[i] Transit ridership remains small, at approximately two percent of all trips and five percent of work trips.[ii]

Energy Information Administration data indicates that the average price per gallon of gasoline increased by over 50 percent between 2005 and 2011, where it remained through 2013 and did not begin to fall until oil prices dropped in 2014. By the end of 2014, gasoline prices had dropped to 2006 levels. Much of the increase in driving that began in 2014 occurred since the decline in gasoline prices started in the last half of the year. 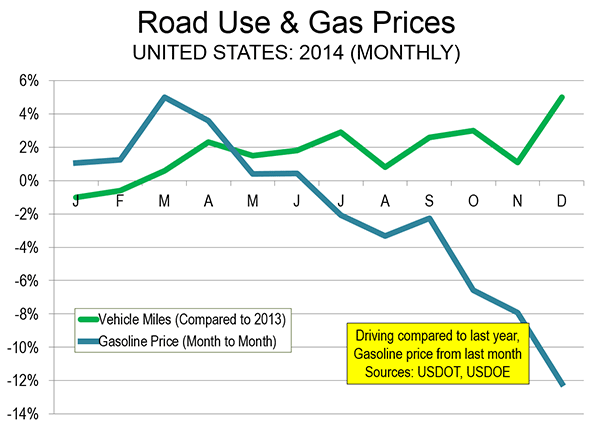 According to data from the St. Louis Federal Reserve Bank, national employment peaked at 138.3 million jobs in January 2008. Employment declined to under 130 million jobs by early 2010. It was not until April 2014 that employment was restored to that peak level that had been reached over six years ago—prior to President Obama’s Presidency. This was the longest employment trough since the Great Depression—from 1929 to 1936. During the latter part of 2014, nonfarm employment continued to increase as did driving. Despite the employment number increasing, the civilian labor force participation rate continues to be depressed. To obtain early 2008 levels of labor participation, at least 10 million additional jobs would be needed. The economy continues to suffer. 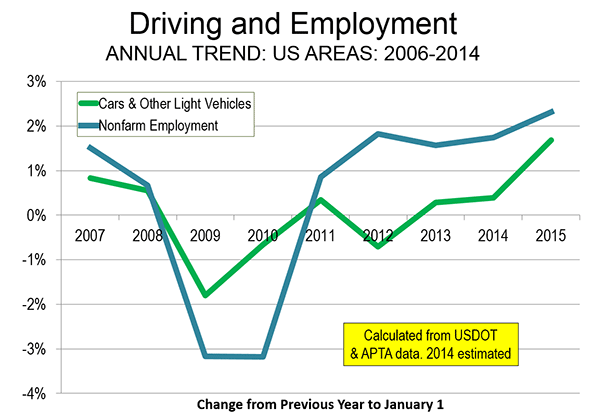 Transit and driving data show that there is no known relationship between annual changes in driving and mass transit use over the period of recent gas price increases and decreases. Increases in mass transit ridership are small and are not noticeably affected by driving levels. Mass transit’s strength is located in the large central business districts where employment densities are 100 times the urban average, and which are served by rapid transit. In New York, Chicago, Boston and San Francisco, for example, more than half the workers use mass transit. Mass transit is used if it is more beneficial than car travel—but that does not occur in most of the land mass areas of the United States. Transit ridership throughout the United States is relatively small– about two percent of all trips and five percent of work trips. After all, who wants to lug home their bags of groceries on a bus or a subway? 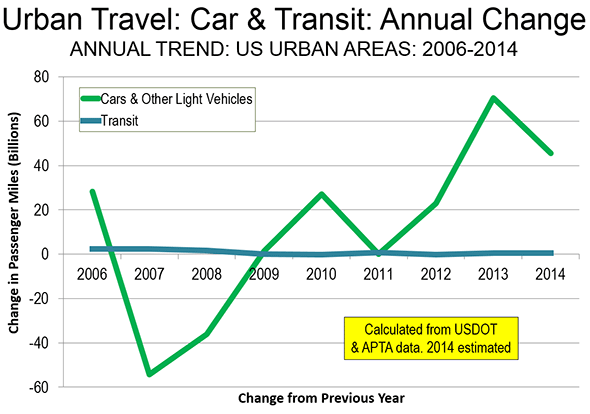 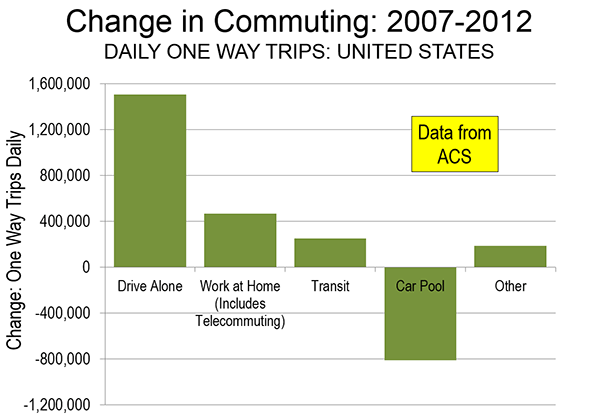 Unlike most federal programs, which are funded by general revenues, surface transportation programs are primarily funded with revenues generated by federal motor fuel taxes that become part of the Highway Trust Fund. The Highway Trust Fund was established by The Highway Revenue Act of 1956 with the intent of paying for the construction of the interstate highway system by linking the users of roads and bridges to the costs of building and maintaining them.

Despite the fact that the nation’s interstate highway system was basically completed by the early 1980s, Congress decided to expand the program and continued to collect revenues from motor fuels. In 1983, for example, Congress diverted one-ninth of the then nine-cent-per-gallon gas tax to a new mass transit account.

Besides transit, the transportation alternatives program that funds pedestrian and bicycle paths and facilities, recreation trails, landscaping, environmental mitigation, and transportation museums, is another diversion for trust fund revenues. From FY 2009 to FY 2011, the Federal Highway Administration obligated over $3.1 billion for these activities. The current surface transportation law, Moving Ahead for Progress in the 21st Century, eliminated some of previously eligible activities but required a 2 percent set-aside of total highway funding to fund those activities that remained.

In 2005, Congress enacted the Safe, Accountable, Flexible, Efficient Transportation Equity Act: A Legacy for Users (P.L. 109–59) and spent more on transportation programs than it collected in fuel tax revenue. It made up the shortfall by transferring $29.7 billion from the General Fund into the trust fund’s highway account and $4.8 billion into the mass transit account for fiscal years 2008 to 2010. Lawmakers again made an $18.8 billion cash infusion for fiscal years 2013 and 2014.[iv] The latest infusion was $10.8 billion into the trust fund to cover programs through May 2015.[v]

Federal subsidies for hybrid and electric vehicles have also distorted the revenues for the trust fund because drivers of these vehicles purchase little or no gasoline and thus do not contribute to the trust fund which supports the roads and bridges they use. The federally mandated corporate average fuel economy standards, which the Obama Administration increased to 54.5 miles per gallon by 2025[vi], will decrease motor fuel consumption and highway trust fund revenues even more.

The Highway Trust Fund cannot support the current size and scope of the federal transportation program. Assuming the spending levels of the current surface transportation law, a new five-year highway reauthorization bill, would require $258 billion in funding. The Congressional Budget Office, however, projects only $201 billion in Highway Trust Fund revenues over that time frame, leaving a deficit of $57 billion.

Over the past two years, a number of states have begun supporting a greater portion of transportation initiatives with their own funding. At least 20 states are tackling transportation funding issues in 2015. Eight states (Maine, Maryland, New Hampshire, Pennsylvania, Rhode Island, Vermont, and Wyoming) have already increased local fuel taxes while others are considering it. Other states (Delaware, Florida, and Ohio) are considering toll revenue bonds or increasing highway tolls. Arkansas, Minnesota, and Wisconsin have enacted, or are thinking about enacting, dedicated sales taxes for transportation. For example, the Minnesota Senate has a comprehensive transportation funding plan to generate more than $800 million in new recurring revenue and $1.5 billion in bonds for the state’s transportation infrastructure. These measures are expected to generate billions of additional revenue for state and local transportation programs, which will largely replace the lack of increased federal funding.[vii]

The Highway Trust Fund, obtained from gasoline and diesel taxes, will again become unfunded at the end of May and Congress will scurry to find ways to fund it. But, unfortunately, politicians, have diverted these funds from where they were originally intended to be used–for America’s roads and bridges–to pet projects and mass transit, and now need to find other funds to continue the highway projects that are underway. Further, the Obama Administration with its push to reduce greenhouse gas emissions is exasperating the problem by reducing revenues to the trust fund through the huge increase mandated for the corporate average fuel economy standards and the large subsidies for hybrid and electric vehicles that add no revenue into the trust fund. The states are not sitting idly by; they are finding ways to fund needed projects themselves and are likely to do a better job.

[iii] New Geography, No Fundamental Shift in Transit, Not Even A Shift, March 20, 2014, http://www.newgeography.com/content/004227-no-fundamental-shift-transit-not-even-a-shift

Jerry Taylor Shows the Weakness of Case for a Carbon Tax