Electricity Prices on the Rise; New England Leads the Pack

According to the Energy Information Administration (EIA), residential electricity prices have risen by 3.2 percent during the first 6 months of this year compared to the first 6 months of last year—the highest year-over-year growth in 5 years. But, the real story is that New England’s residential electricity prices have risen 11.8 percent over that period—the highest increase anywhere in the nation. That is because New England is shuttering low-cost coal and nuclear plants and replacing them with new natural gas plants and mandated renewable energy sources. Worse, New England has done this against a backdrop of in-sufficient pipeline capacity to feed all the demands on natural gas for heating, cooking, and electricity generation in the region as we saw during the Polar Vortex last year.

The increase in electricity prices in New England and across the nation will only get worse as onerous regulations by the Environmental Protection Agency (EPA) will shutter more and more of the nation’s coal plants in favor of high cost renewable technologies and natural gas plants with insufficient pipeline infrastructure to reach consumers in times of high demand. Unless New England starts building pipelines posthaste, or EPA’s anti-coal policies and other anti-nuclear policies are reversed, the region may soon be in serious jeopardy of having adequate power. 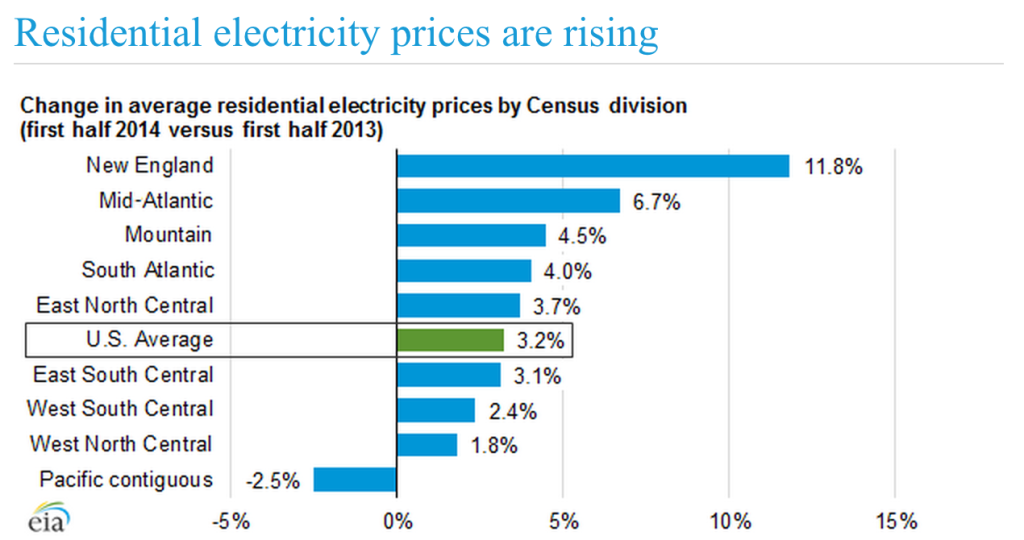 Residential electricity prices for the first 6 months of 2014 averaged 12.3 cents per kilowatt hour nationwide, an increase of 3.2 percent from the same period last year. All regions, except for the Pacific Contiguous region, saw increased electricity prices; but, New England’s increase was the largest at 11.8 percent, followed by the Mid-Atlantic region at 6.7 percent.

The large increase in New England’s electricity rates was largely due to the lack of natural gas infrastructure during the “polar vortex” resulting in the day-ahead wholesale power price in the ISO-New England control area to an average $93 per megawatt hour, 45 percent higher than the average wholesale price during the same period last year. The generation component of New England’s residential consumers’ electricity bills, which reflects the costs of generating electricity, increased 21.4 percent on average during the first 6 months of 2014 for consumers purchasing from retail electricity suppliers. The delivery component of the bill, which reflects the cost of transmitting and distributing electricity to consumers, increased by just 2 percent during the first 6 months of this year.

While EIA displays retail residential electricity prices in the Pacific Contiguous region as declining by 2.5 percent during the first 6 months of this year compared to the first 6 months of last year (see above chart), a more comparable measure would show an increase of 0.9 percent. That is because the decline is “distorted by a temporary dip in revenues for California utilities during the month of April” which EIA uses to calculate average electricity prices. The lower revenue comes from greenhouse gas emissions credits that average about $35 that are added to most household electricity bills. California credits residential electricity bills twice a year to offset the increases in utility bills that result from California’s laws that mandate higher cost renewable energy and tax carbon dioxide emissions from power plants and industrial facilities. By excluding the emission credit from those bills, residential electricity prices in the Pacific Contiguous region increased by an average of 0.9 percent during the first half of this year.[i] 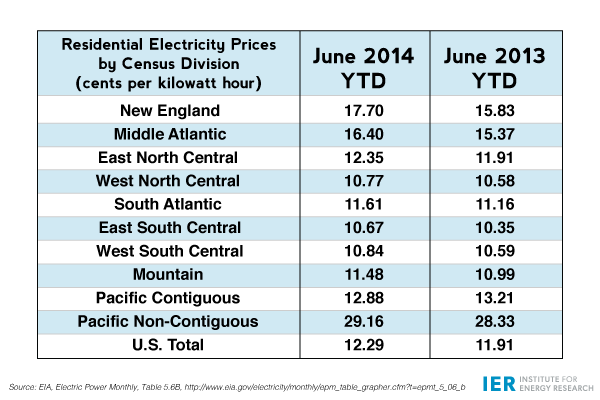 [1] In EIA’s divisions, New York is included in the Middle Atlantic, not New England, but New York’s electricity rates are much more closely tied to the New England states.

One can expect higher electricity prices from existing and proposed EPA regulations as they go into effect. The Obama Administration presses on with a platform of policies whose ultimate end is the destruction of the nation’s coal industry. EPA regulations already in effect regarding the Mercury and Air Toxics Standards (MATS) rule have resulted in the announced shutdown of about 300 coal-fired units nationwide[ii] which in turn will result in the closing of coal mines across the nation.

But that regulation was just one of the first steps regarding the Administration’s ‘war on affordable energy’. More recently, EPA proposed that new coal-fired plants must have carbon capture and sequestration (CCS) technology in order to meet proposed new requirements limiting coal-fired plants to only 1,100 pounds of carbon dioxide per megawatt hour of electricity, around 40 percent less than the average U.S. coal-fired plant emits.  Unfortunately for the American public, those who work in the coal industry and consumers of electricity, CCS is not commercially available despite EPA’s claims. (Click here for more detail.)  In a nutshell, CCS is extremely expensive; it reduces the output and efficiency of power plants; pipelines do not exist to transport the carbon dioxide to a location where it could be sequestered; and the opposition to those pipelines and sequestration projects will most likely be significant.

But, President Obama’s EPA is not content to stop here. On June 2, 2014, EPA announced its plan to order  carbon dioxide reductions on existing coal-fired power plants, most of which are not configured to add the necessary environmental equipment even if it were commercially available. The so-called power plant rule mandates the reduction of carbon dioxide emissions from the power sector by 30 percent from a “2005 baseline” by 2020—a sector that has already reduced emissions from its actual 2005 base by 16 percent.  The proposed rule provides each state with a detailed target and a set of “options” that EPA has determined will allow them to reach their assigned requirements. But, in EPA’s analysis, premised under their interpretation of the Clean Air Act that carbon dioxide endangers public health via its impact on the climate and temperature, there is no mention of climate or temperature benefits from the rule. The Cato Institute, using EPA’s climate model, calculated the temperature reduction from the proposed rule to be a mere 0.018 degrees Centigrade by 2100.[iii]  With such de minimus projected benefits; it is easy to see why they were apparently too embarrassed to include the “climate benefits” of their rule when they presented it to the public.

The result of these and ongoing EPA rules, if put into force, will be no new coal-fired plants in the United States and massive closures of existing coal plants.  Since coal is our single largest source of electricity generation, replacing these  units will require the construction of high-cost renewable generating technologies and/or natural gas units that will need massive infrastructure improvements to meet the higher demand. And, consumers will need to pay for these changes. While the cost increases are only starting, they will continue for many years to come.  We need only look towards Europe, which attempted many of these policies and is now suffering debilitating electricity prices and economic stagnation to see the future for the United States if these policies are not adjusted.

Residential electricity prices are increasing and they will continue to increase as Obama Administration’s regulatory policies go into effect. New England’s experience this past winter is a prime example of what happens when electricity markets rely heavily on one fuel and that fuel has insufficient infrastructure to meet high demands, causing power prices to skyrocket. Although coal plants were used heavily during this past winter to supply power and grid operators are warning the country that planned coal and nuclear retirements may cause electricity generating capacity to be insufficient to meet demand next winter, EPA is not letting up on its onerous regulations regarding coal-fired power plants. Consumers can expect to be hit with rapidly accelerating electricity bills and an increased likelihood of brown outs and black outs.  This is unlikely to turn out well.

The Story of Electricity