America’s recent oil and natural gas boom is typically characterized as either a major boost to economic growth or an environmental liability. Voices on both sides of the argument tend to highlight two major factors for this recent growth: hydraulic fracturing and horizontal drilling. What many on both sides of the argument fail to recognize, either intentionally or otherwise, is that much of the oil and gas renaissance can be credited to technological advances in advanced imaging processes.

The Oil and Gas Renaissance

This U.S. oil and gas boom began in 2004 in North Dakota when hydraulic fracturing and horizontal drilling were combined and applied to a well,[i] confirming that these technologies could unlock vast amounts of oil or gas in pockets deep underground. In horizontal drilling, a well is bored at an angle to run lengthwise along the richest slice of rock. Hydraulic fracturing uses a high-pressure stream of water, sand, and a few chemicals underground to crack apart the rock and free the crude and natural gas. These technologies have made drilling faster, cheaper and better at obtaining energy from shale rock formations. 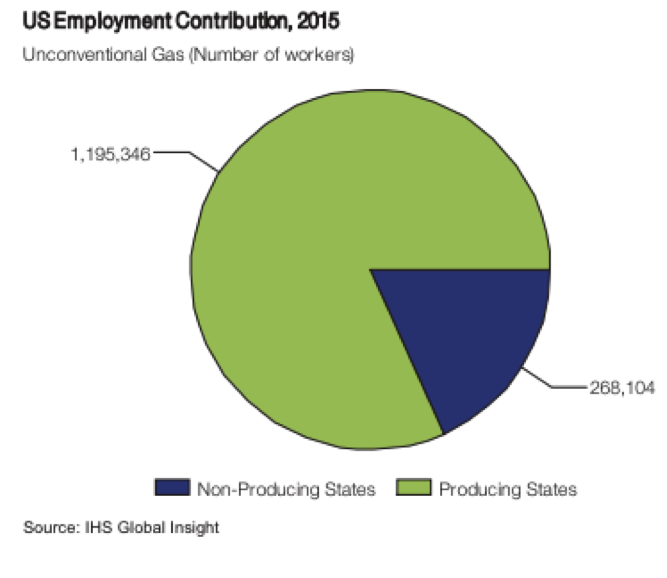 Shale gas is booming in part because extraction technology (hydraulic fracturing and horizontal drilling) has made it economical to produce when previously it was inaccessible because it was trapped in shale rock through which gas would not readily flow. Its abundant supply has forced U.S. natural gas prices to drop below $2 per thousand cubic feet, making it an affordable fuel for manufacturers, who are moving back some of their operations from overseas.[iii] Today the price has increased a little to $3.72 per million BTU, but that is a far cry from 2008 when prices hit $13 per million BTU.[iv] 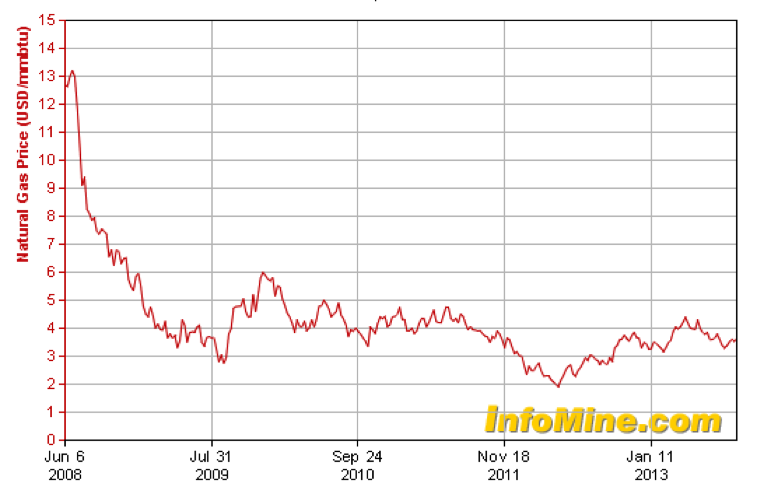 Rapid growth is occurring in the oil sector as well. According to the International Energy Association (IEA), the United States will become the world’s largest producer of oil by 2017, overtaking both Saudi Arabia and Russia. By 2030, North America will become a net exporter of oil and, by 2035, the United States becomes almost energy self-sufficient.[v]

The IEA also forecast that the United States will rely more on natural gas than either oil or coal by 2035 due to its cheap domestic supply and uses by industry and electricity generators. Electricity prices are expected to be about 50 percent cheaper in the United States than in Europe as a result of the increase in the number of power plants fueled by cheap natural gas. 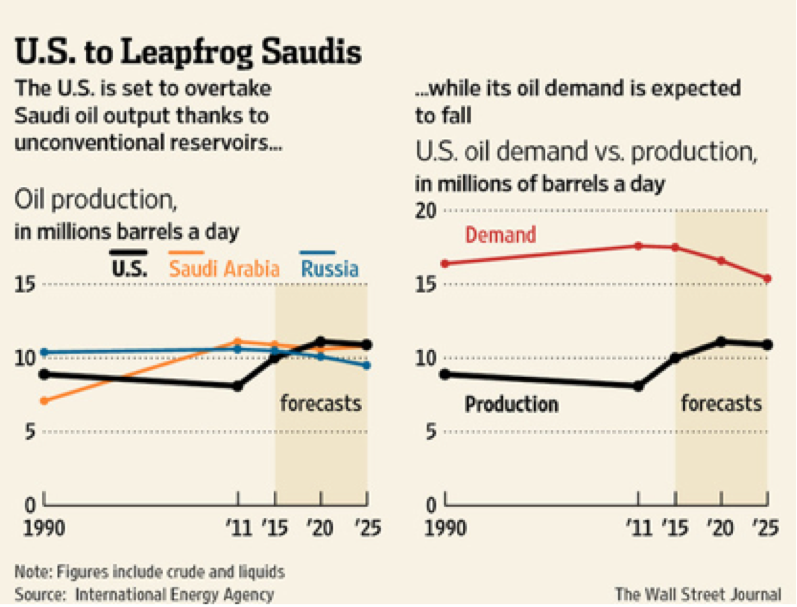 The Forgotten Art of Imaging

As noted by the Institute for Energy Research (IER), access to federal lands for energy exploration has been severely limited by the Obama Administration. Currently over 92 percent of all onshore oil is produced on private and state-owned lands. Oil and gas producers are constantly facing this reality of less exploratory access and so increasing efficiency of available resources has become a major emphasis.[vi] 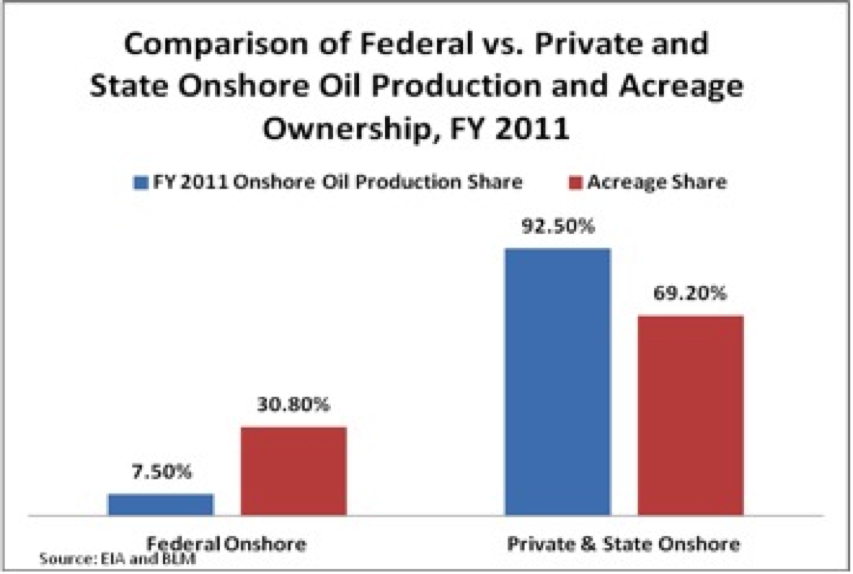 While the combination of hydraulic fracturing and horizontal drilling has been key for extracting increased amounts of energy, it should not be assumed that companies just walk out into a field, stick a pipe in the ground and magically produce record amounts of oil and gas.

Before any work on a production well begins, potential sites go through an extensive survey and imaging process to get an idea of what may lie underground. Over the last hundred and fifty years this science has been developed from basic geological recognition and recording to the elaborate, high-tech computer imaging systems of today.

The first major move from basic geologic observation was into seismic exploration. This is a process of emitting energy waves into the Earth to see how they react with various layers underground. These techniques are used in both onshore and offshore projects, and when combined with geological, magnetic and gravitational information, have been converted into complex data sets for computers to process for today’s exploration.[vii]

In the 1980s, as computers became more accessible, companies began developing three dimensional (3-D) imaging for oil and gas exploration. This process allowed developers a better look at underground conditions to increase overall performance and avoid trouble areas. A major breakthrough for the energy industry, 3-D technology has been estimated to raise likely success in reservoir location by 50 percent.[viii] In addition to better reservoir locations, 3-D imaging has increased the recovery rate of oil and gas wells to between 40 and 50 percent. This is up from the 25 to 30 percent recovery rate of wells using two dimensional (2-D) imaging.[ix]

4-D Imaging and the Future

Most people only consider three dimensions when thinking of an image. However, with the compilation of huge amounts of data and computer processing power, another dimension can be added. The “fourth dimension” is time, and it is revolutionizing the oil and gas business.

This advanced imaging is essentially a time-lapse compilation of 3-D seismic monitoring which allows scientists to follow the flow of oil and gas before and during the exploration process. This allows companies to identify depleted or untapped resources throughout the life of a well as periodic measurements are compared against an initial baseline record.[x]

Four dimension (4-D) imaging was initially ignored by the industry due to complexity and cost, but as fears of demand surpassing supply grew, companies began to see 4-D imaging as a way to maximize existing oil fields and increase efficiency.[xi]

The United States Geological Survey (USGS) has said that the most productive wells in a given area can produce at levels 100 times higher than the poorest performers in the same region.[xiii] This fact is not lost on the oil and gas producer and is crucial to remember as the energy boom in the US continues.

While hydraulic fracturing and improved drilling techniques can increase output once a well is drilled, it is just as important for the well to be in the right spot. With the development of advanced imaging techniques in three, and now, four dimensions, better knowledge of what is underground and how it will impact production is allowing for huge gains in efficiency. These advances may be just as critical to continued growth in U.S. oil and natural gas production as their counterparts, hydraulic fracturing and horizontal drilling.