Last night, the power went out twice during the San Francisco 49er’s return to Monday Night Football. This is significant for two reasons. First, we live in a country with such a reliable electrical system that it’s news when the power goes out. Second, this reliability may soon come to an end with EPA’s latest Utility MACT regulation and other rules in the regulatory pipeline.

Soon, EPA will publish their Utility MACT regulation in the Federal Register. One of the biggest concerns about the regulation is the impact it will have on the reliability of the electrical grid. Last month, the North American Electric Reliability Corp. (NERC) published a report which stated that EPA regulations, including Utility MACT, will cause reliability problems unless prompt action is taken. While it is indeed troubling that EPA would endanger the reliability of the electrical grid, what is worse is that NERC underestimates the scope of the problem.

NERC estimates that EPA air regulations will shutter between 7.5 and 17.8 gigawatts of electric generation capacity. IER’s analysis, however, which aggregates EPA’s modeling with real-world utility announcements about plant closings shows that 30 gigawatts of electrical generation capacity is at risk from the Utility MACT rule and the Cross State Air Pollution Rule. If NERC is concerned about 17.8 gigawatts going offline, losing another 12 gigawatts could be truly catastrophic for the reliability of the electrical grid.

Hopefully, EPA will be reined in before blackouts such as the one we saw during last night’s Monday Night Football become common place.

To see if power plants in your state are a risk of closing see our new report. 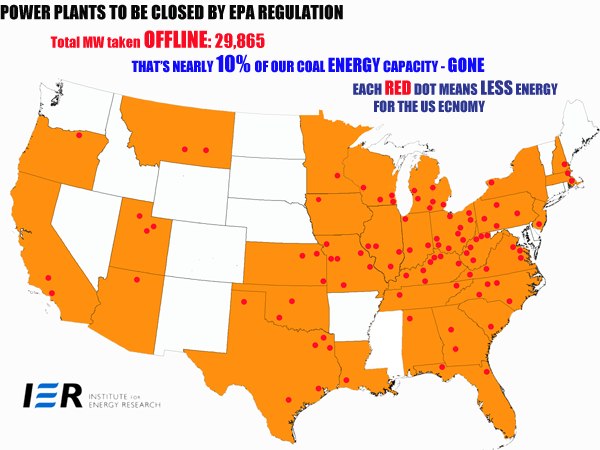