California is rich in both conventional and renewable energy resources. It is the country’s most populous state and has the second largest energy consumption in the nation, second only to Texas. California has large energy resources, but also one of the lowest per capita energy consumption rates in the country. The state is frequently hailed as a leader on energy policy and California’s policies are leading to higher energy prices.

California’s regulations have driven up energy prices, and the regulations will continue to push those prices up.  For example, California motorists are required to use a special motor gasoline blend called California Clean Burning Gasoline, making California have one of the highest gasoline prices in the lower 48 states. California has also enacted regulations to increase the price of energy in an effort to reduce carbon dioxide emissions. These excessive regulations do not help California’s jobs outlook, nor will it help the state balance its budget. 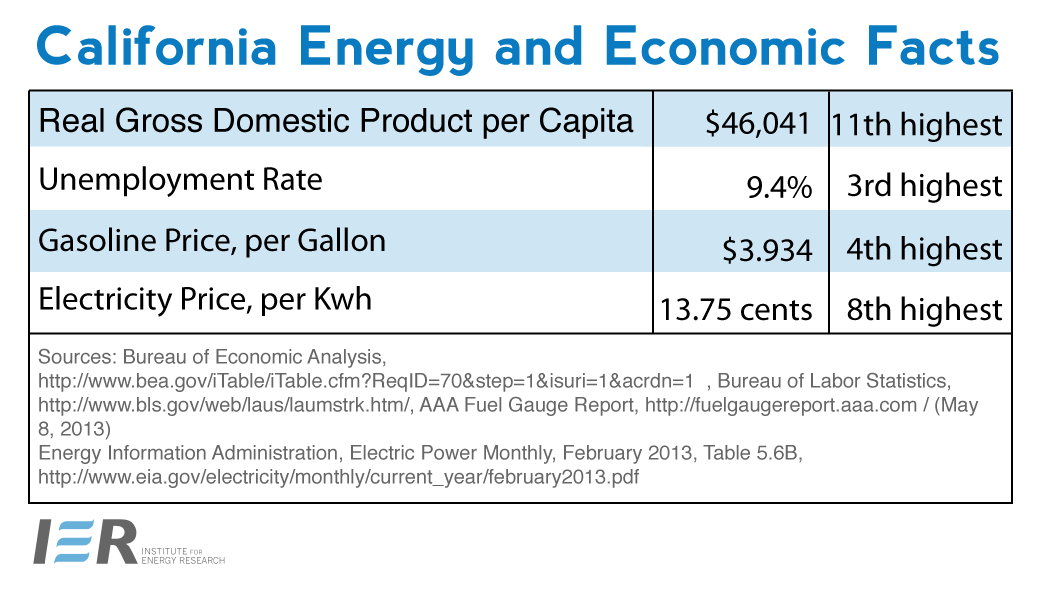 California is the fourth largest producer of crude oil in the nation, after Texas, North Dakota, and Alaska. In 2012, California produced more than 8 percent of total U.S. oil production. California has large crude oil and substantial natural gas deposits in six geological basins, located in the Central Valley and along the Pacific coast. Most of those reserves are concentrated in the southern San Joaquin Basin. Seventeen of the country’s 100 largest oil fields are located in California, including the Belridge South oil field, the third largest oil field in the contiguous United States. In addition, Federal assessments indicate that large undiscovered deposits of recoverable oil and gas lie offshore in the federally administered Outer Continental Shelf (OCS), which in 2008 was reopened by the Bush administration and Congress for potential oil and gas leasing, but which has not been included in the Obama Administration’s 2012-2017 OCS Leasing Plan.

Drilling operations are concentrated primarily in Kern County and the Los Angeles basin, although substantial production also takes place offshore in both state and federal waters. California has a permanent moratorium on new offshore oil and gas leasing in its state waters due to issues regarding the perceived cumulative impacts of offshore oil and gas development and the possibility of marine oil spills. Development on existing State leases, however, is not affected and can still occur within offshore areas leased prior to the effective date of the moratorium.

While the moratorium on oil and gas leasing in federal waters expired in 2008, the Obama administration has not included areas off the California coast in its 5-year offshore lease plan. Further, on May 3, 2013, the Bureau of Land Management (BLM) issued a press release, announcing the postponement of 4 parcels of public lands covering 1,278 acres that were to be offered for oil and gas lease sales in California on May 22, 2013. BLM has indicated that the lease sales would not occur in California during this fiscal year allegedly due to the sequester budget cuts, despite the fact that leasing increases revenue to the U.S. Treasury and that the cancellation is in violation with the Mineral Leasing Act of 1920, which requires each state office to conduct four lease sales a year.[i]

A network of crude oil pipelines connects production areas to refining centers in the Los Angeles area, the San Francisco Bay area, and the Central Valley. California refiners also process large volumes of Alaskan and foreign crude oil received at ports in Los Angeles, Long Beach, and the Bay Area. Crude oil production in California and Alaska is in decline due to state and federal lease policies. As a result, California refineries have become increasingly dependent on foreign imports.

California ranks third in the United States in petroleum refining capacity and accounts for more than one-tenth of total U.S. capacity. California’s largest refineries are highly sophisticated and are capable of processing a wide variety of crude oil types and are designed to yield a high percentage of light products like motor gasoline. To meet strict federal and state environmental regulations, California refineries are configured to produce cleaner fuels, including reformulated motor gasoline and low-sulfur diesel.

Because of California requires specific and unique fuel blends and because California’s petroleum market is relatively isolated, California motorists are vulnerable to short-term spikes in the price of gasoline. As a result, California refineries often operate at close to maximum capacity. When an unplanned refinery outage occurs, replacement supplies are brought in via marine tanker, which can take two to six weeks due to the state’s strict fuel requirements.

Natural gas-fired power plants generate over one-half of the state’s total electricity generation. California is the third largest hydroelectric power producer in the United States behind its northern neighbors, Washington state and Oregon. In 2012, hydroelectric power generated 13 percent of California’s electricity. Nuclear power plants generated 9 percent of the state’s total generation in 2012. As of mid-2012, California had just one of its two nuclear plants operating. Its 2,160-megawatt Diablo Canyon nuclear plant near San Luis Obispo is still operating. Its 2,150-megawatt San Onofre nuclear plant between Los Angeles and San Diego went off-line in January 2012 and was ordered by the Nuclear Regulatory Commission to stay off line while tubing wear issues are investigated.   Due to strict emission laws, only a few small coal-fired power plants operate in California, generating less than one percent of the state’s electricity. A California law also forbids utilities from entering into long-term contracts with conventional coal-fired power producers. 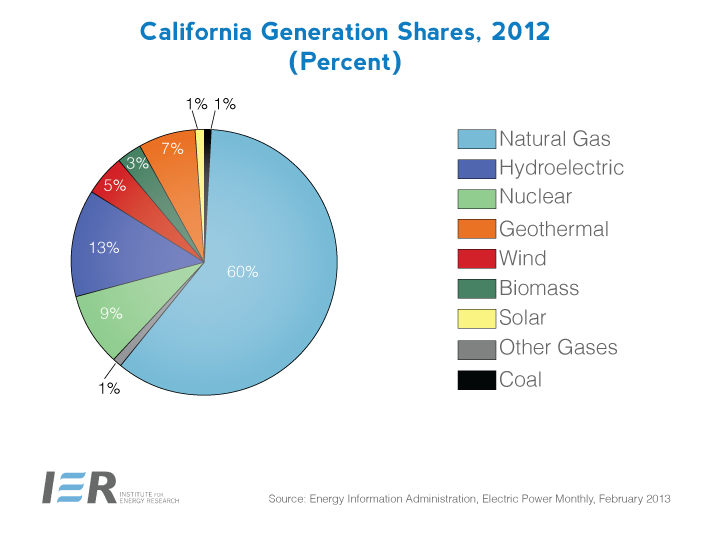 California is the top producer of electricity from geothermal energy in the nation, generating 7 percent of its electricity in 2012.  A facility known as “The Geysers,” located in the Mayacamas Mountains north of San Francisco, is the largest complex of geothermal power plants in the world, with more than 700 megawatts of installed capacity, and has been operating for decades.

California is the nation’s third largest generator of wind energy, behind Texas and Iowa, generating 5 percent of the state’s electricity.

The world’s largest solar power facility operates in California’s Mojave Desert and a number of new solar power plants are under construction.  The Bureau of Land Management is giving priority status to 5 solar project proposals in California that will be constructed on federal lands. To further boost renewable energy use, California’s Energy Action Plan includes incentives that encourage Californians to install solar power systems on their rooftops. The state leads the nation in the total number of homes that have solar panels installed and leads the nation in electricity generated from solar power, generating one-third of the solar-powered central station electricity in the United States in 2012.

In 2000 and 2001, when California initially deregulated its electricity generation business, it suffered an energy crisis characterized by electricity price instability and four major blackouts that were caused by a supply and demand imbalance. Multiple factors contributed to this imbalance, including: a heavy dependence on out-of-State electricity providers, drought conditions in the northwest that reduced hydroelectric power generation, a rupture on a major natural gas pipeline supplying California power plants, strong economic growth leading to increased electricity demand in western States, an increase in unplanned power plant outages, and unusually high temperatures that increased electricity demand for air-conditioning and other cooling uses. Following the energy crisis, the California State government re-regulated the industry and created an Energy Action Plan designed to eliminate outages and excessive price spikes. The plan calls for optimizing energy conservation, building sufficient new generation facilities, upgrading and expanding the electricity transmission and distribution infrastructure, and ensuring that generation facilities can quickly come online when needed.

In 2006, California amended its renewable portfolio standard to require investor-owned utilities, electric service providers, small and multi-jurisdictional utilities, and community choice aggregators to provide at least 20 percent of retail sales from renewable sources by the end of 2010 and 33 percent by the end of 2020. California has also adopted other policies to promote energy efficiency and renewable energy, including energy standards for public buildings, power source disclosure requirements for utilities, and net metering.

California’s renewable portfolio standard of 33 percent by 2020 is making its Independent System Operator of its electricity grid worried regarding reliability and dependability of its future electricity generating sources. Some examples will demonstrate the reason. Early in the summer of 2006 as well as on later occasions, California faced record heat conditions that strained its ability to meet a peak demand of 50,000 megawatts.  The resources at that time included 2,323 megawatts of wind capacity.  However, wind’s average on-peak contribution over the month of June was only 256 megawatts or barely 10 percent of the nominal amount.[ii]   This example shows that data on installed wind capacity is of little or no value in predicting the actual power the system can get from it at peak times.

Another example occurred in August, 2012, when the California Independent System Operator issued a “flex alert” that called for a reduction in use of lights, air conditioning, and appliances, i.e. the call was for electrical conservation in order to avoid black-outs. At that time, California had 4,297 megawatts of installed wind capacity, but less than 100 megawatts were operating at 11 am on August 9, 2012, or just 0.02 percent of electricity demand. While solar was contributing more at 11 am than wind, by 5 pm when demand was at its highest, solar’s electrical generation output waned and wind’s output was increasing but not enough to meet demand. Wind’s more sizable generation levels do not occur until the late night or very early morning hours when they are least needed. The California Independent System Operator has on many occasions expressed concerns about its ability to maintain reliability in the face of a 33 percent renewable portfolio standard for 2020 that will require a tripling of wind and solar power production.[iii]

Although affordable energy is a vital component of a healthy economy, regulations frequently increase energy costs. Regulations imposed in the name of reducing carbon dioxide and greenhouse gas emissions are especially costly. Carbon dioxide is a natural byproduct of the combustion of all carbon-containing fuels, such as natural gas, petroleum, coal, wood, and other organic materials. Today, there is no cost-effective way to capture the carbon dioxide output of the combustion of these fuels, so any regulations that limit carbon dioxide emissions will either limit the use of natural gas, petroleum, and coal, or dramatically increase their prices.

Below is a summary of California’s regulatory environment:

California often takes credit for being a leader among the states in setting policy and serving as an example, but the question is where is California leading? California is rich in conventional and renewable energy resources, but instead of using these conventional energy resources, the state puts obstacles in the way of conventional energy, which is leading to much higher energy prices for Californians.  California has one of the highest gasoline prices in the continental United States despite being a large oil producer and despite being home to large oil deposits. California has the highest residential electricity rates in the western United States—33 percent higher than Nevada’s, 44 percent higher than Arizona’s, and 58 percent higher than Oregon’s. These higher prices are the direct outcome of California’s burdensome regulation on the use and production of energy, and that regulation costs the state and its residents, jobs, investment and revenue.  Its policies are making the state poorer, in much the same way similar policies in Europe have contributed to economic stagnation there.

The Domestic Energy Bonanza and the Economy