Washington, D.C. — The Institute for Energy Research released today a white paper assessing the Environmental Protection Agency’s (EPA) failure to detect the massive fraud of former EPA official John Beale, who cheated American taxpayers out of at least $900,000 over 13 years.

The paper, entitled “Dirty Business at the EPA: A Report Assessing the Administrative Failures that Enabled The Fraud of John C. Beale,” examines how the EPA enabled Mr. Beale’s fraud and how the agency’s oversight became increasingly lax under former Office of Air and Radiation (OAR) Assistant Administrator Gina McCarthy as demonstrated by the chart below: 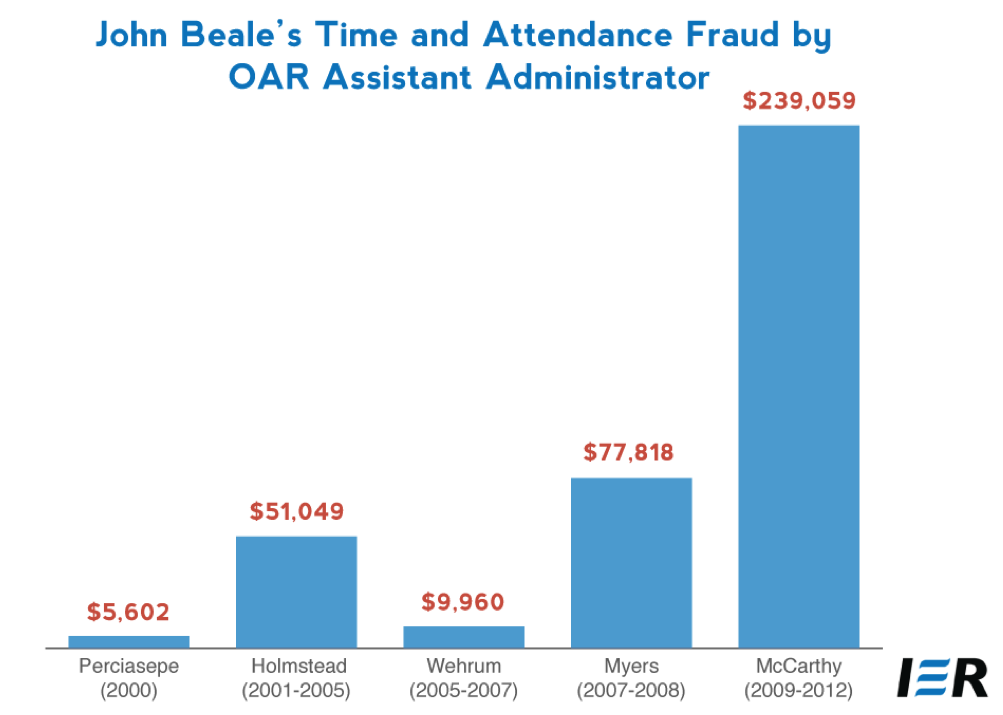 The following are key findings from the white paper:

“John Beale may be in jail for his crimes, but this case is certainly not closed. Until EPA regains the trust of the American public that suspected fraud will be reported, investigated, and addressed by senior EPA officials, there is little reason to believe that the agency won’t continue to callously abuse taxpayer dollars. The web of professional and personal entanglements, the administrative incompetence, and the seeming willingness to conceal the full extent of Beale’s fraud raise questions that deserve answers.

“At a time when EPA is expanding its regulatory reach into new sectors of the American economy, and going full steam ahead in implementing President Obama’s economically destructive Climate Action Plan, public trust in the agency has eroded to a historic low. The public deserves nothing less than the complete record of John Beale’s fraud and the actions taken — or not taken — by his supervisors and colleagues to expose his crimes.”

office of air and radiation

Heritage Confirms that Gov't Model Can Give Social Benefits of Carbon