Earth Day was founded in 1970 to create “an environment of decency, quality, and mutual respect for all human creatures and all living things.”[1] In many ways the United States has achieved those goals, but we have a long way to go to elevate all of humanity. Fortunately, improvements in the economic well being of Americans has led to an improved environment at the same time.

One good example of economic and environmental improvements is America’s air quality success. Despite claims of gloom and doom, air quality in the United States is improving, even as our economy, automobile use, population, and energy consumption have all increased. This is an untold success story. The graphic below from the Environmental Protection Agency demonstrates the success of our clean air efforts: 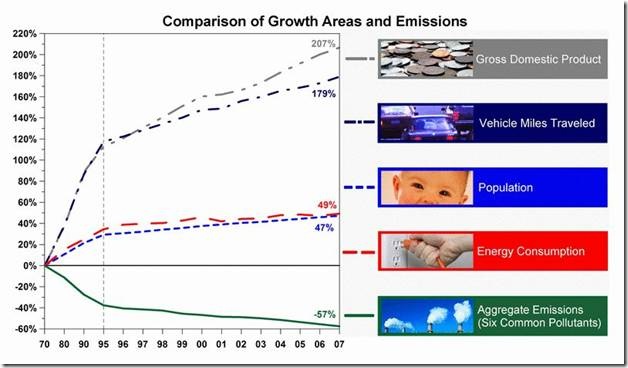 The reason our air quality has environment improved is quite simple: when people become wealthier, we can more easily afford cleaner water and air.[3] When the industrial revolution started in America, environmental quality first decreased. However, as wealth increased, it quickly improved, even beyond previous levels. As the graph above shows, greater wealth leading to greater environmental quality has continued.

Research on environmental quality and wealth implies that we will overcome environmental challenges only if we increase our wealth and technology. [4] Government programs were not responsible for the great strides we have made in shifting to cleaner energy sources. For example, the discovery and use of oil helped end the slaughter of whales for whale oil. A century ago, our streets were littered with horse manure. Today our streets are manure-free not because of improved street cleaners, but because people stopped using horses and started using electric-powered street cars, diesel powered buses, and gasoline powered cars.

Instead of relying on Americans to make the best choices about which energy sources make the most sense, the federal government has been trying for years to try to make politically-correct energy sources like wind, solar, and ethanol cost-effective. So far these government programs have failed. Even after decades of subsidies, the New York Times agrees, recently reporting that after that “wind power is currently more than 50 percent more expensive than power generated from a traditional coal plant” [5]. And the president’s own Energy Secretary Stephen Chu, told the New York Times that solar technology would have to get five times better to be competitive in today’s energy market.[6] Because wind and solar are not cost-competitive, they contribute only a small amount of electricity. In 2008, wind produced 1.3% of the electrical generation in America and solar produced a meager 0.02%.[7]

The federal government provides generous subsidies, tariffs, and even a mandate that the U.S. use a certain percentage of biofuel, and still biofuel companies struggle to survive. Not only are biofuel companies finding it difficult to stay in business, it turns out that mandating biofuel use could “be totally insane” as a way to reduce greenhouse gas emissions.

1. There will be no green revolution in energy or anything else. No leader or law or treaty will radically change the energy sources for people and industries in the United States or other countries. No recession or depression will make a lasting change in consumers’ passions to use energy, make money and buy new technology—and that, believe it or not, is good news, because…

2. The richer everyone gets, the greener the planet will be in the long run.

As we take the time to reflect on the message of the original Earth Day, we should remember what has been proven to work in the past—wealth creates the conditions that lead to environmental improvements. Politicians shouldn’t be in the business of telling us which energy sources we can or can’t use. History shows that people who are free to use what sources make sense is also the best choice for our environment.

IER’s Michaels To Markey Panel: Cap-and-Trade “Most Profoundly Anti-Consumer Legislation Ever Brought Before a Congress”