The Energy Information Administration (EIA) is telling us that not only did the oil production renaissance decrease our reliance on imported oil, but it also was successful in stabilizing world oil prices and making energy cheaper for Americans. Oil prices in 2013 were around the same average annual levels of the previous 2 years. Further new pipeline and rail infrastructure helped to alleviate crude oil bottlenecks in the United States, pushing West Texas Intermediate oil prices in 2013 to almost their 2008 level and keeping Brent oil prices in toe as the EIA’s graph below indicates. West Texas Intermediate oil prices averaged $98 per barrel in 2013, 4 percent higher than 2012 prices and North Sea Brent prices averages $109 per barrel in 2013, 3 percent lower than its 2012 level. As the United States needs less sweet light crude from abroad, more of that crude is available to other markets, lowering the global price.[i]

Thus, U.S. consumers benefit in several ways from increased U.S. oil production. Since oil is priced on world markets, consumers benefit from lower crude oil prices and lower oil product prices. And, because oil imports are lower, the U.S. economy benefits from a lower trade deficit. A decline in oil imports pushed the trade deficit in November to the lowest level in four years, showing the U.S. economy is becoming more energy independent. The U.S. trade deficit fell by 12.9 percent in November to $34.3 billion, according to the Commerce Department.[ii]

EIA released its Short-Term Energy Outlook last week and is projecting West Texas Intermediate (WTI) oil prices to fall in both 2014 and 2015. In 2014, EIA expects WTI prices to decline 4.7 percent from 2013 levels, and in 2015, a decline of 4 percent from 2014 levels is expected. Similarly, EIA expects Brent crude oil price to decline 3 percent in 2014 from 2013 prices and 3.6 percent in 2015 from 2014 prices—the weakening Brent crude oil price is due to the expectation that non-OPEC supply growth will exceed growth in world consumption.

As the above graph shows, in recent years, there has been a discount in the WTI oil price compared to the Brent crude oil price. The discount of WTI crude oil to Brent crude oil averaged $18 per barrel in 2012, around $4 per barrel in July 2013, and $12 per barrel during the fourth quarter of 2013. U.S. oil prices had experienced a large discount compared to Brent crude oil prices due to bottlenecks at production sites and transshipment points caused from a lack of transport infrastructure. However, due to pipeline reversals to change the direction of flow from, rather than to, bottleneck sites and due to new pipeline capacity, such as the southern portion of the Keystone pipeline, there is now sufficient capacity to move crude oil via pipeline from Cushing, Oklahoma to the U.S. Gulf Coast.

EIA is projecting the discount of the WTI crude oil price to Brent will remain at an average $12 per barrel in 2014 due to the uncertainty that the existing refinery infrastructure in the United States will be able to absorb the increasing production of U.S. light sweet crude oil at current prices.  EIA expects the 2014 price discount levels to continue into 2015 since new infrastructure is expected to come online to meet the additional production growth.[iii] 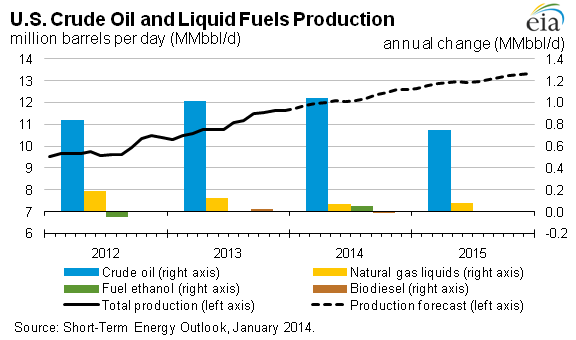 The Permian Basin in West Texas includes a variety of thick, overlapping formations including the Wolfcamp shale formation, touted to be the largest oil field in the United States and the second largest in the world. Crude oil producers are investing in research and implementation of hydraulic fracturing in both vertical and horizontal wells to obtain oil in the future from these stacked formations.

Increased domestic petroleum production has resulted in less U.S. petroleum imports.  Net imports peaked at over 60 percent in 2005, declined to 33 percent in 2013, and are expected to fall to 24 percent in 2015, which would be the lowest level since 1970.[iv] 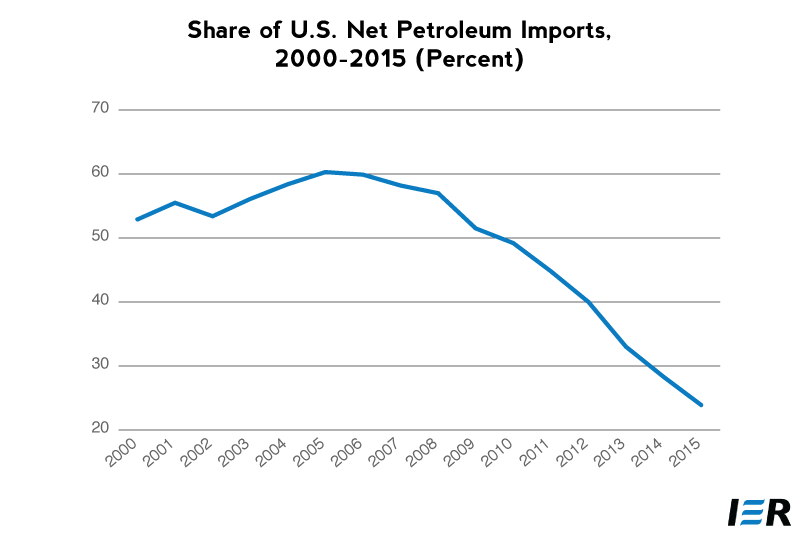 Hydraulic fracturing and directional drilling have created an oil production renaissance in the United States that has lowered petroleum imports, stabilized world oil prices, and created new jobs and investment while reducing prices for Americans. Net petroleum imports have declined from over 60 percent in 2005 to 33 percent in 2013, and to a projected level of 24 percent in 2015. Brent crude oil prices in the past 3 years have hovered around $110 per barrel and EIA expects them to decline in 2014 and 2015 due to non-OPEC oil production growth exceeding oil consumption growth. The United States has the resource potential to further increase domestic oil production, particularly on federal lands, which could dampen prices further if government red tape and regulations were lifted.