Residential electricity sales had been increasing by about 2 percent per year between 2000 and 2010 due to the construction of larger homes and the growth in new technologies using electricity, such as personal computers. However, once the recession hit, residential electricity sales declined by about 1 percent and then increased by 6 percent in 2010 before declining by almost 5 percent between 2010 and 2012. The decline is expected to be a result of relatively mild weather, resulting in less heating and cooling use, population shifts to less energy intensive areas and smaller homes, and efficiency improvements resulting from appliance efficiency standards.  Increased efficiency in space heating, air conditioning, and major appliances and better insulation and thermal pane windows have resulted in decreased consumption per household, despite increases in the number of homes, the average size of homes, and the increased use of electronics. 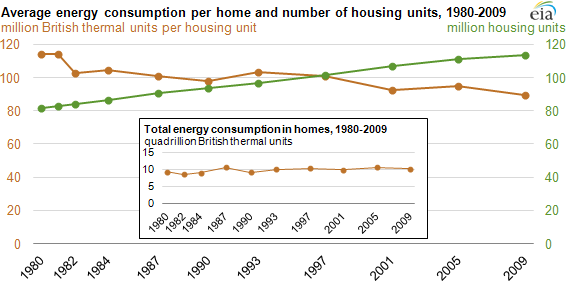 It is interesting that the cost of many electronic items in residential households is quite low. For example, the cost of charging a mobile phone is about 25 cents per year. An iPhone battery, for example, holds a charge of about 5.45 watt hours. If it is fully drained and recharged every day, then over a year it would need about 2,000 watt hours of electricity (i.e. 2 kilowatt hours). At an average electricity price of 12 cents per kilowatt hour for the residential sector, a cell phone uses about 25 cents of electricity per year.[i]

Electricity sales to the commercial sector have increased by about 1 percent per year between 2000 and 2010, but have been fairly flat since 2010. Similar to the residential sector, weather patterns affect electricity demand for heating and cooling, and efficiency standards improved the efficiency for lighting and space heating, helping to keep commercial building energy demand flat in recent years.

Certain states, such as California[iii], have allowed their utilities to “decouple” revenue from the sale of electricity to enable utilities to increase their revenue while selling less electricity. Revenue decoupling is defined as a ratemaking mechanism designed to eliminate or reduce the dependence of a utility’s revenues on sales. Under this program, utilities get to charge more for supplying less. Its intent, in theory, is to remove the disincentive a utility has to promote customer efforts to reduce energy consumption and demand or to install distributed generation to displace electricity delivered by the utility. Revenue decoupling provides an allowance so that the utility can maintain a certain level of revenues or revenues per customer. Differences from the targeted revenues are recaptured from customers through a surcharge or credit.[iv]

Note that by its definition, revenue decoupling does not necessarily benefit customers because consumers are essentially charged a higher rate for the electricity they use. Theoretically, because consumers have lowered their demand through efficiency improvements, their bills are expected to be lower despite the higher rate. Critics of revenue decoupling say it distorts the core business functions of electric utilities and interferes with the overall regulatory process. (IER previously explained the issues with decoupling here.) 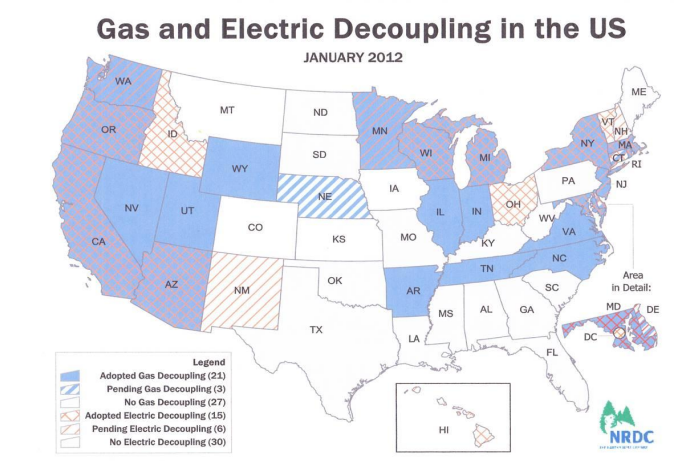 Electric utilities are also finding issues with net metering in that the excess electricity produced by the customer enters the grid that is maintained by the electric utility companies without a charge for its use. Electric utilities in Arizona are asking their Public Utility Commission to allow a charge for the use of the electricity grid by customers using distributed electricity, arguing that customers who do not produce solar power have to subsidize the use of transmission lines for those that do produce solar power and sell their excess electricity to the grid. That is, utilities are forced to buy electricity from people with solar panels and transport it on their lines without cost, forcing other customers to pay all of the utilities’ transmission costs.

Electricity sales are declining despite a greater number of households and increasing commercial floor space, indicators usually of increasing energy demand. While the number of households has increased, the electricity used per household has declined. A number of factors have influenced this trend including weather, appliance efficiency standards, building codes, and homeowners generating their own electricity.  Since electricity consumption has historically been linked to economic growth, this reduction in electricity poses important questions for policymakers about the country’s economic growth rate, the potential to grow further, and ultimately, the direction of electricity pricing for future investment decisions.

Pennsylvania: An Energy and Economic Analysis

Heritage Confirms that Gov't Model Can Give Social Benefits of Carbon