In a recent New York Times article, economics laureate Paul Krugman warned Americans that Donald Trump’s agenda would make the air unsafe to breathe. In particular, Krugman warned that Trump’s selection of Scott Pruitt for EPA chief would return air pollution to the levels of 1970, when the EPA was formed.

However, Krugman is wrong both in theory and practice. Yes, air quality is better now than in 1970, but even before the EPA existed, air quality had been steadily improving for decades. This steady trend of improvement was due to general economic development, nuisance suits, and regulation at lower levels of government. It makes little sense for the federal government to impose air quality regulations on smaller jurisdictions, rather than letting the local inhabitants make their own decisions on the tradeoffs involved.

To show that I’m not strawmanning his position, here are some excerpts from Krugman’s column:

[I]n other ways Mr. Trump can indeed restore the world of the 1970s. He can, for example, bring us back to the days when, all too often, the air wasn’t safe to breathe. And he’s made a good start by selecting Scott Pruitt, a harsh foe of pollution regulation, to head the Environmental Protection Agency. Make America gasp again!

Think about what America was like in 1970, the year the E.P.A. was founded. It was still an industrial nation…

It was also, however, a very polluted country. Choking smog was quite common in major cities; in the Los Angeles area, extreme pollution alerts, sometimes accompanied by warnings that even healthy adults should stay indoors and move as little as possible, were fairly common.

It’s far better now — not perfect, but much better. These days, to experience the kind of pollution crisis that used to be all too frequent in Los Angeles or Houston, you have to go to places like Beijing or New Delhi…

The key point is that better air didn’t happen by accident: It was a direct result of regulation — regulation that was bitterly opposed at every step by special interests…

So the looming degradation of environmental protection will be a bad thing on every level: bad for the economy as well as bad for our health.

The good news, sort of, is that some of the nasty environmental consequences of Trumpism will probably be visible — literally — quite soon. And when bad air days make a comeback, we’ll know exactly whom to blame. [Krugman, “Trump and Pruitt Will Make America Gasp Again,” NYT, Dec. 9. 2016, bold added.]

Krugman’s characteristically frank prose needs little explanation. His readers would understandably walk away thinking that we have Washington DC to thank for the improvement in air quality that has occurred since 1970. That is why—according to Krugman—if Trump and his Cabinet picks roll back federal regulations, then Americans can expect a return to the air pollution of prevailing in 1970.

For those who know history, there’s just one awkward fact for Krugman’s narrative: On several metrics, air quality in the United States had been steadily improving for decades before the creation of the EPA.

The charts below were taken from the excellent 2007 book, Air Quality in America, by AEI scholars Joel Schwartz and Steven Hayward. (All charts are from the first chapter.) The figures illustrate that air quality was improving in the US well before the EPA came along in 1970. 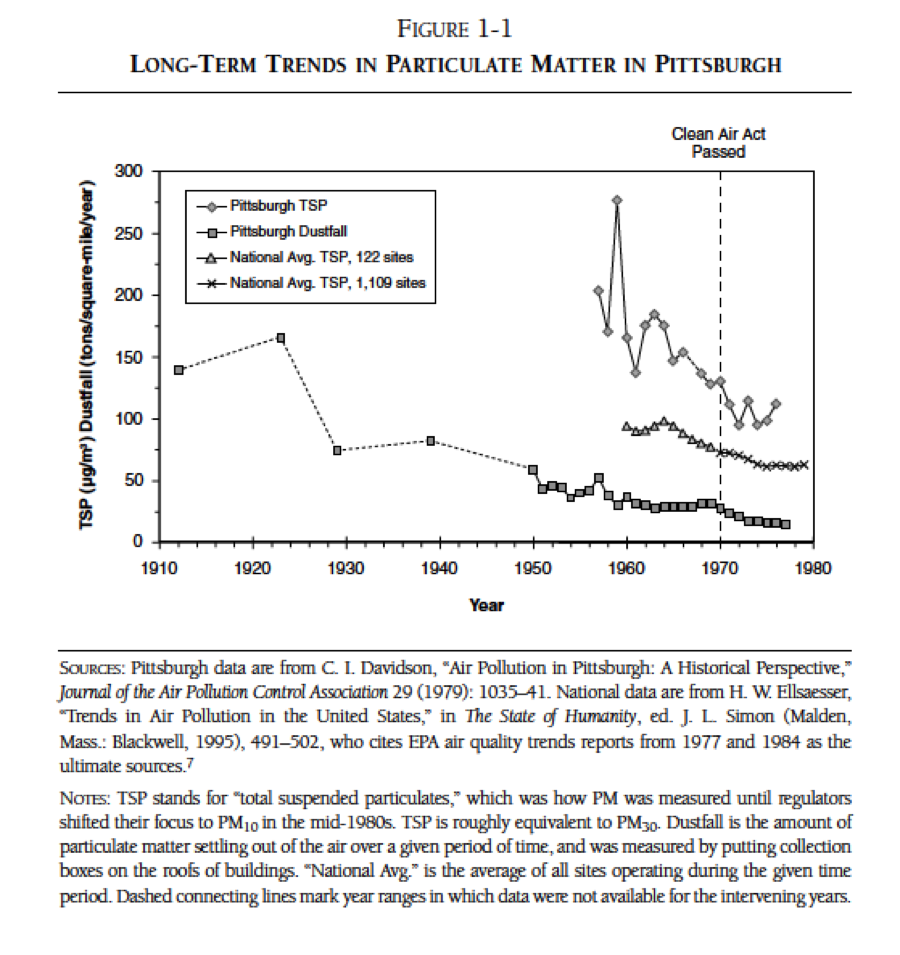 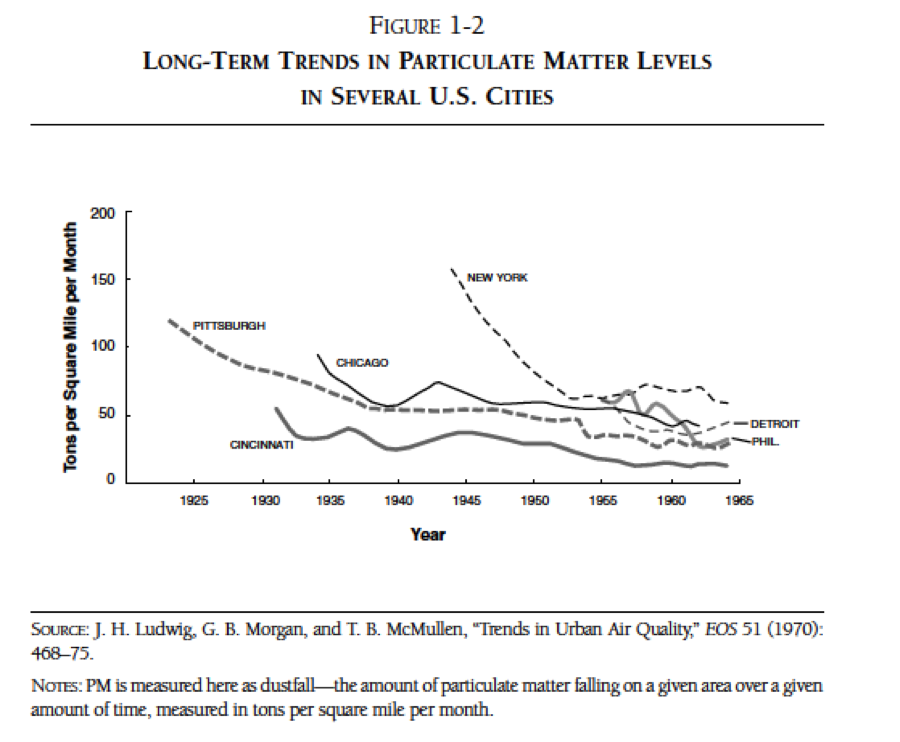 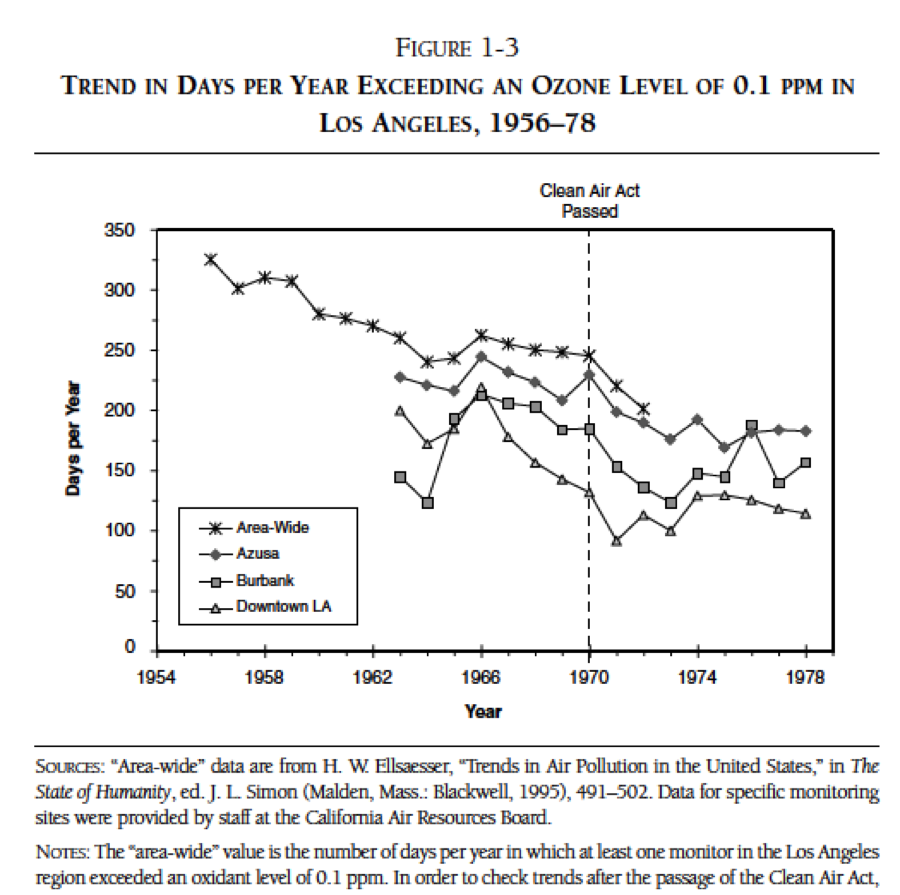 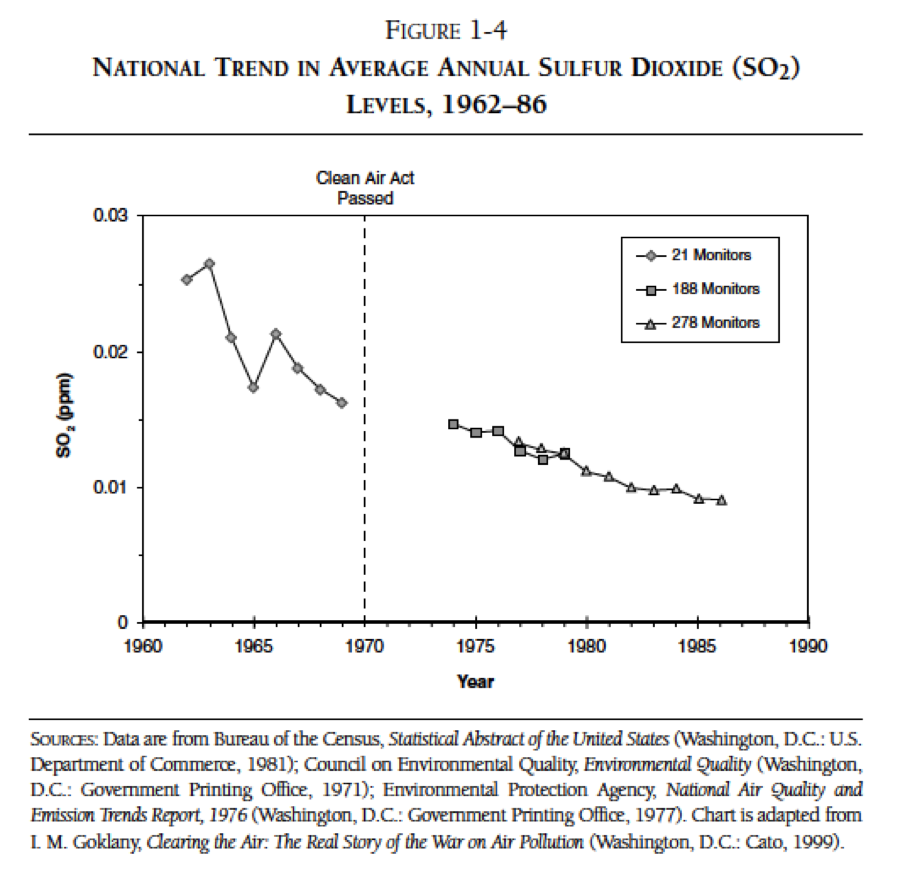 As the four figures indicate, according to various metrics air quality in the United States had been improving well before the creation of the EPA and passage of the Clean Air Act. We have no reason to attribute the gains in air quality since 1970 exclusively to federal intervention, and Krugman is wrong to claim that a rollback of federal regulations would return us to the air quality prevailing in 1970.

Why Did Air Quality Improve Before the EPA?

In their book, Schwartz and Hayward argue that general economic development played a crucial role, in which cleaner air was the byproduct even if it were not consciously planned. For example, “growing affluence allowed households to switch from coal to cleaner, more efficient natural gas for home heating and cooking,” while improvements in electrical transmission allowed power plants to be located near coal mines rather than cities. We could also mention that the shift away from horses to automobiles allowed for much cleaner roads in America’s densest cities.

More generally, as people grow richer they can afford the luxury of a cleaner environment. For any given level of technological know-how and capital equipment, there is a tradeoff between the material standard of living and the cleanliness of the environment. As conventionally measured real GDP increases, people can choose to “buy” cleaner air and water. Other trends of developing economies are the move trends shorter workweeks, the elimination of child labor, and increased workplace safety.

Yet all of these desirable improvements have a cost, in the sense that material output is lower than it otherwise would be. If a society starts out on the edge of starvation, then its people—even the children—will toil on farms and in factories, and they won’t waste money installing filters on smokestacks. But as they grow richer, they shift away from these methods of production. A rich, modern economy can afford to produce large quantities of food, electronics, energy, and houses without pumping soot into the air, and without requiring adults to work 80-hour weeks or kids to fill the factories.

The path to such progress is saving and capital accumulation, so that workers have better tools and equipment and thus a higher productivity per hour of labor. If we take a society on the verge of starvation and simply pass laws prohibiting the business practices certain observers find distasteful, we won’t magically make these people more productive. Instead we will condemn them to death.

Besides general economic growth, Schwartz and Hayward also credit “common-law nuisance suits” against pollution. It turns out that Krugman’s narrative is, if anything, exactly backwards. It was not the pure laissez-faire free market that allowed businesses to dump chemicals in rivers, but on the contrary it was governments that (sometimes) overturned traditional property rights of homeowners in favor of “industrial development.” I don’t have space to develop the thesis here, but interested readers should look at libertarian economist Murray Rothbard’s perspective in which he argued that solving pollution was simply a matter of defining and enforcing property rights. Traditional forms of pollution were not a “market failure” but government failure.

Finally, Schwartz and Hayward cite “local regulation” as a source of the decline in pollution pre-EPA. This is intriguing because it shows that even if one wants to argue that some form of government regulation is necessary to ensure minimum standards of air and water quality, it by no means follows that these must be enacted at the federal level.

For example, Krugman in his column reminds us that “[c]hoking smog was quite common in major cities; in the Los Angeles area, extreme pollution alerts…were fairly common.” Now suppose it were true that a Trump Administration rolled back federal standards on air quality. Does that mean the people in LA would once again endure choking smog?

Well, if they did­—and assuming they longed for a return to regulation—why wouldn’t LA just pass a citywide regulation? Or why wouldn’t the state of California pass rules on vehicle and smokestack emissions?

Notice that Krugman is trying to have it both ways. Although room didn’t permit me to quote it, Krugman brought up global climate change as an area where (of course) he thought a Trump/Pruitt policy would be disastrous. But then he pivoted to focus on local issues of air quality, arguing that Americans would directly experience how bad a laissez-faire world would be.

Yet as I’ve just shown, this makes no sense. If the people in LA or Pittsburgh are happy with the current level of government intervention when it comes to air quality, they can mimic current federal standards at the state and/or local level. This would solve most of the issue, except possibly for people in one state living next to factories located in another state with looser standards. Yet Krugman wasn’t making such a sophisticated, secondary argument; he was writing as if we either had the EPA or complete “anarchy” in air quality.

There is a huge benefit of leaving local conditions up to local jurisdictions: experimentation and choice. Perhaps some Americans would rather have slightly lower air standards in exchange for higher rates of wage growth. Under the current system, they don’t have this option; Washington imposes a one-size-fits-all standard. But under the federalist approach, different states and/or cities could enact different types of policies, and at least Americans would have the option of moving to jurisdictions that best suited their preferences. Furthermore, having 50 “laboratories” might shed light on more efficient ways to achieve cleaner air and water at lower cost.

When Krugman warns that a Trump EPA will make Americans gasp again, he is ignorant of both American history and political economy. Not everything has to be regulated from Washington. (After all, typical cases of homicide and robbery are not federal crimes, and are handled at the state level.) When it comes to air and water quality, if we want to invoke government regulation, they are clearly best handled by state and local authorities. Finally, we must always keep in mind that the only way we can “afford” cleaner air and water is to expand the capacity of the economy to produce more goods with our existing resources.

How the Oil Price War Made U.S. Producers Even Stronger