On Sunday, January 15, 2012, IER Senior Vice President Dan Kish was a guest on Platts Energy Week, where he discussed President Obama’s energy agenda, the Keystone XL pipeline, and the abundance of American energy now possible because of shale production.  Click here to watch the entire segment. 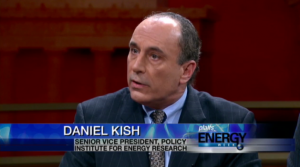 “I think the president has pretty much decided that in cases where he has to choose between environmental groups and working Americans and their energy costs, he’s decided he wants to go there.”

On the Environmental Protection Agency:

“It’s pretty evident to most Americans and to Congress that the EPA’s excesses are costing us jobs.  It’s just that simple, and the evidence is in the unemployment rate.”

On the disconnect in Washington:

“The rest of the country is not Washington D.C., where everybody is sitting in high cotton because the government is spending huge amounts of money.  There is tremendous unemployment, economic dislocation, hardship.”

On the approval of Keystone XL Pipeline:

“I think President Obama has decided to turn his back on those people who work with their hands and build this nation . . . those who would get the tens of thousands of jobs in construction and by adding supplies of secure energy from our neighbor and biggest trading partner.”

On energy development in Texas:

“I think Texas is beginning to see what the cost of intermittent power is both to their grid and their electricity prices.  I think the real issue that’s going to rear its head is liquids that come from shale production.  The amount of liquids — oil, distillates — is going to increase, and increase rapidly.  And I think it’s going to be a good signal for those people that rely on that for their employment.”

“The energy surprise this year is going to be what George Will in his first editorial this year, which was the ‘specter of abundance.’  What’s happening — and I think it’s beginning to flush through they entire psyche of the United States and the investment community and communities around the country — is that we’re discovering that contrary to what we’ve been told for 40 years, the United States is not running out of energy.  We’re not energy poor.  And we could put millions of people to work by producing more of our own energy in what look to be some of the largest supplies of energy on earth.  I think that’s going to break, and break big.”

Gluts and low prices: nothing new