President Obama and Congress continue to mandate energy efficiency improvements in appliances, air conditioners, heat pumps, dishwashers, clothes washers, and other items that use electricity. Each year, these regulations get more and more demanding. At first blush, it would appear that there is no downside to mandating improved energy efficiency. After all, energy efficiency saves us money right?

The problem is that energy efficiency is not free. Appliances with greater energy efficiency cost more money—sometimes a lot more. Also, these more energy efficient appliances were frequently less time efficient. In other words, it takes more time to do the same amount of work. The fact that these appliances take more time is especially concerning because people’s time is precious—once it’s gone you can’t get it back and there is no substitute for time.

Americans, not policymakers, should be free to choose which appliances make the most sense for their families instead of being forced to purchase more expensive appliances.

Energy efficiency mandates are based on the premise that American consumers do not make wise choices about energy efficiency without the government forcing them to make “good” choices. It is a dubious claim. Consumers pay attention to their electric bill, and that is especially the case with commercial users of appliances.

Since then, washing machines have improved—but the energy efficiency mandates still make them more expensive than they would otherwise be. The least expensive washing machine Consumer Reports recommends in 2013 still costs $700[iii] while a machine with the highest rank for energy and water efficiency costs $1000[iv]. Americans save $15 a year in energy costs by using one of the more efficient $700 washers and about $30 a year on the most efficient $1000 model.[v] At these rates it would take nearly 18 years to recoup the extra costs of the more efficient washing machines (even adjusting for inflation from 2006 to 2012).

It is not just that these clothes washers are more expensive, although they meet the energy efficiency standards the appliances are less time efficient. In other words, the average time these appliances must run to complete a cycle has gone up drastically.

In 2006, Consumer Reports “Best Buy” top-loader and front-loader clothes washers averaged cycles of 45 and 75 minutes respectively.[vi] In 2012 those cycles increased to 71 and 83 minutes.[vii] To put this added time in perspective, an average American family does 392 loads of laundry per year[viii] which would result in an added 180 hours, or 7 full days, of added laundry time when switching from a 2006 to 2012 top-loading washing machine. This means that to save $15-$30 a year on energy bills, it costs American families an additional 180 hours of time.

Like clothes washers, dishwashers today are less time efficient than in the past. In 2006,  Consumer Reports top 10 dishwashers had an average runtime of 113 minutes. In 2012, the average cycle jumped to 126 minutes.[xi] The average family washes 210 loads of dishes a year which means the dishwasher is running an additional 45 hours a year. 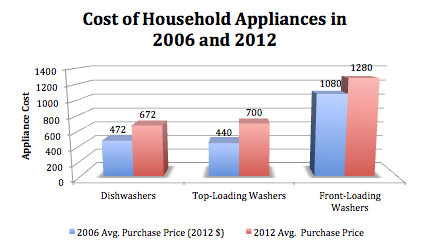 ***Front-Loading averages based on top 10 models reviewed in each year. Of note, 2006 overall ratings were significantly lower than 2012.  Source: Consumerreports.org 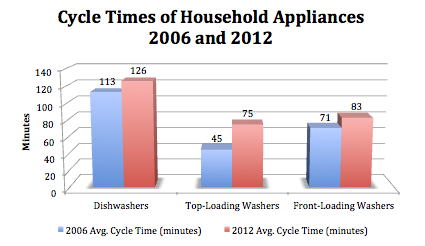 Americans are intimately aware of the costs of their utility bills and are always looking for ways to balance the convenience of their appliances with energy savings. Americans are also acutely aware of their precious time. When federal regulators step in and mandate energy efficiency improvements, the mandate increases the price of appliances and makes the appliances less time efficient. Federal bureaucrats have no business making this tradeoff for Americans.

There are real concerns that the overall costs of energy efficiency mandates outweigh the benefits. Appliances are now more expensive and occupy more valuable time in the lives of Americans. There is no need for lawmakers and bureaucrats to step in and artificially limit our choices, especially to implement regulations on appliances with costs that will take nearly two decades to recoup. To borrow a phrase from President Obama, if you like your dishwasher, you should be able to keep your dishwasher. Period.

[v] In 2009, Consumer Reports noted online in subscriber only section of their website that “Each improvement in energy-efficiency scores, from good to very good, for instance, cuts an average of $10 to $20 from your annual energy expenditures.” The 2012 washing machines are rated at “Very Good” for energy efficiency at $700 and “Excellent” for the $1000 model, while the 2006 washer was rated as “Good” on energy efficiency.

The Impact the Government Shutdown had on the Energy Industry

Departing FERC Chairman Rejects “All of the Above” Energy Policy