Maine does not have fossil fuel reserves of its own, but it has vast renewable energy potential. Because of its substantial use of wood as fuel, the state has the highest percentage of non-hydroelectric renewable energy use in the country. Maine produces more electricity from burning wood and wood waste than any other state, as these resources provide over a quarter of the state’s electricity. Due to its forest products industry, Maine is the only New England State in which industry is the leading energy-consuming sector, accounting for 34 percent of its energy consumption in 2010. It has the lowest average electricity prices among the New England states.

Maine does not produce oil and has no oil reserves but receives petroleum products from abroad at its coastal ports, including Portland, Searsport, and Calais. Because Maine has no refineries, the Port of Portland sends its crude oil shipments via pipeline to refineries in Quebec and Ontario.

Maine uses fuel oil for home heating during its long, cold winters. Over two-thirds of Maine households use fuel oil as their primary energy source for home heating, a higher share than in any other state. Due to the Northeast’s high use of fuel oil for home heating and to reduce the risk of fuel shortages due to weather and other issues, the Department of Energy established the Northeast Heating Oil Reserve. The Reserve gives Northeast consumers adequate supplies for about 10 days, the time required for ships to carry heating oil from the Gulf of Mexico to the New York Harbor. The Reserve’s storage terminals are located in Perth Amboy, New Jersey, and Groton and New Haven, Connecticut.

Maine has substantial renewable energy potential through its numerous rivers, forests, and windy areas that provide for hydroelectric, wood-fired, and wind-powered generation. The state is one of the top U.S. producers of electricity from wood and wood waste, producing 26 percent of the state’s electricity in 2012. Non-hydroelectric renewable energy sources (wood and wood waste and wind) account for a larger share of net electricity generation (about one-third) in Maine than in any other state. 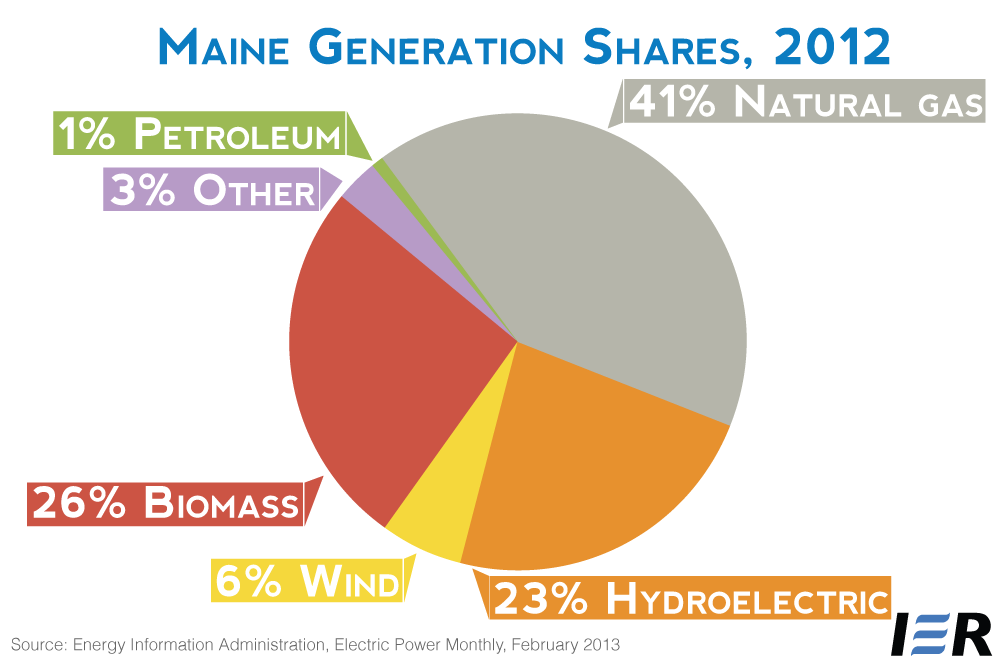 Because demand for air-conditioning is low during its cool summer months and because few households use electricity as their primary energy source for home heating, Maine’s residential electricity use is low compared with the rest of the nation.

Like most states, Maine requires new residential and commercial buildings to meet energy efficiency standards. Unlike some states, Maine does not require gasoline to be mixed with renewable fuels. It does not impose state-based appliance efficiency standards. And, it does not allow utilities to “decouple” revenue from the sale of electricity and natural gas, which allows utilities to increase their revenue by selling less electricity and natural gas.

In September 1999, Maine’s Public Utilities Commission adopted a renewable portfolio standard (RPS) requiring that at least 30 percent of retail electricity sales come from renewable sources.  Eligible renewable sources include fuel cells, tidal, solar, wind, geothermal, hydro, biomass or municipal solid waste in conjunction with recycling.  Since 1999, the renewable portfolio standard has been amended several times and two separate classes designated. Class II includes existing renewables, which are eligible to meet the 30 percent requirement. Class I is composed of new renewable sources that have come on-line after September 1, 2005. The schedule for Class I renewables started at 1 percent in 2008 and increases by 1 percentage point each year until 2017, when it must total 10 percent. The Maine RPS requires renewables (Class I and II combined) to reach 40 percent by 2017.

Maine requires new residential and commercial buildings to meet energy efficiency standards. Residential buildings must meet the Maine Uniform Building and Energy Code (MUBEC) based on the 2009 IRC, while commercial buildings must meet the MUBEC based on the 2009 International Energy Conservation Code (IECC) or ASHRAE 90.1-2007. The IRC, the IECC (developed by the International Code Council) and ASHRAE (developed by the American Society of Heating and Refrigeration and Air Conditioning Engineers) are model codes that mandate certain energy efficiency standards.

New state buildings must also meet energy efficiency standards. Maine requires the incorporation of “green building” standards into the design, construction, operation and maintenance of any new, expanded or existing state building if cost-effective. Maine Statutes Title 5, Section 1764-A also requires that plans and designs for the construction of new or substantially renovated buildings owned or leased by the state include an energy-use target that exceeds standards for commercial and institutional buildings by at least 20 percent.

In March 2005, the governor of Maine announced that the state would join the federal “Energy Star Challenge.” As part of this partnership, the state committed to encouraging building owners and operators throughout Maine to improve energy efficiency by 10 percent or more using performance contracting and other mechanisms. The state also agreed to track energy use and greenhouse-gas emissions from government buildings and identify the best ways to improve energy efficiency in those buildings.

In 2003, Maine’s governor established a goal for the state government to buy at least 50 percent of its electricity from “reasonably priced” renewable-power sources, paid for by energy conservation improvements in all state buildings.  As of March 2007, Maine’s state government was purchasing 100 percent of its power from renewable energy resources. The state’s existing renewable energy portfolio standard accounts for 30 percent of this total. For the remaining 70 percent, the state is purchasing renewable-energy credits (RECs) from the Rumford Falls hydropower project in Rumford, Maine.

The State of Maine has no fossil fuel reserves, but does have potential for substantial renewable energy from hydroelectricity, wood and wood waste (biomass) and wind, generating over 50 percent of its electricity from these sources. It has the lowest average electricity prices among the New England states and is their leading industrial producer because of its biomass energy sources.

Why the “Social Cost of Carbon” Matters