In a recent post we critiqued Paul Krugman’s lengthy review of William Nordhaus’ new book on climate change economics. An important point that we didn’t bring up was Krugman’s discussion of Nordhaus’ celebrated 1973 article on the future of the energy sector. As even Krugman admitted, Nordhaus’ projections turned out horribly wrong. This is extremely significant for our current policy debate, because Nordhaus’ DICE computer model is one of the three selected by the Obama Administration’s Working Group for estimating the “social cost of carbon.”

Remember that the alleged necessity for placing a “price” on carbon is the estimate of the huge damages that will supposedly accrue in the future. As I explained in my testimony to the Senate over the summer, the lion’s share of the simulated damages don’t even begin (in the computer simulations) until after the year 2060 or so, and then run through the year 2300 in the Working Group’s procedure. Thus, current federal policy is being guided by William Nordhaus’ computer simulations of the energy sector, broader economy, and climate for the next three centuries. Surely we should be skeptical of these projections when his 1973 projections—as Paul Krugman himself admits—have already turned out badly mistaken.

Nordhaus Not Even “Warm” in His Guesses About the Future

In his review of Nordhaus’ new book, Krugman brings up a 1973 paper that was pioneering at the time; the added twist was that Krugman at the time was an undergrad at Yale who helped Nordhaus with the research. In this paper, Nordhaus set himself the monumental task of forecasting world energy markets for the next 150 years, to show what the “optimal” (i.e. economically efficient) energy sources and prices should be for the United States. The purpose of the exercise was to contrast Nordhaus’ “optimal solution” with what the actual market was doing.

To get some idea of how Nordhaus’ projections look in hindsight, consider what Krugman had to say about it: “[I]f one looks back at “The Allocation of Energy Resources,” one learns two crucial lessons. First, predictions are hard, especially about the distant future.” But we have not even reached the distant future from when Nordhaus wrote the article.

We are now only 40 years into the future and Nordhaus’ projections are very, very wrong; they completely misconstrue the actual evolution of energy markets and the relative costs of various energy sources. Here is the summary table from page 552 of Nordhaus’ 1973 article: 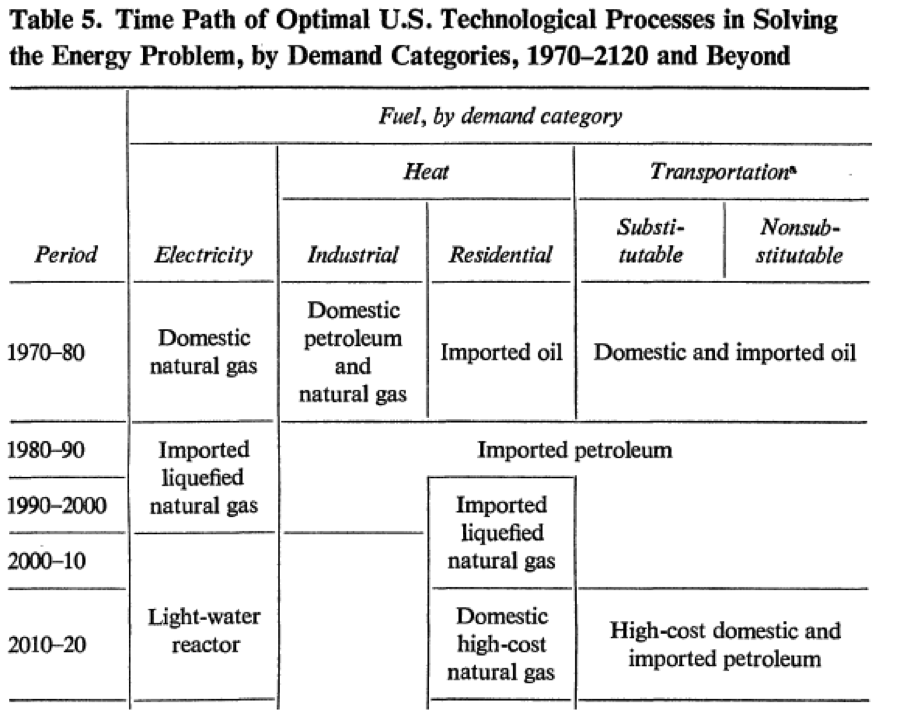 As the table indicates, Nordhaus projected that under optimal resource usage, the United States would experience the “virtual exhaustion of domestic petroleum resources in the first decade.” In other words, Nordhaus’ projection in 1973 said that if the U.S. followed optimal energy usage, in seven years it would begin relying exclusively on foreign oil, and would not restart production of “high-cost” domestic petroleum until the year 2010.[1] Furthermore, Nordhaus’ projection of optimal energy usage had the U.S. relying exclusively on imported (rather than domestic) natural gas from 1980 through 2010, at which time it becomes efficient to begin using high-cost U.S. natural gas. Thus, Nordhaus failed to anticipate the natural gas boom which has completely revolutionized energy markets, and he obviously had no idea that the U.S. by this point would be on the verge of leading the world in oil production.

My point in bringing up these outlandish forecasts isn’t to mock Nordhaus (or his research assistant). After all, if I were after funny cheap shots, I would point out Krugman’s 1998 prediction: “By 2005 or so, it will become clear that the Internet’s impact on the economy has been no greater than the fax machine’s.”

But we’re not after cheap laughs here. Nordhaus’ terrible predictions about the energy sector in his 1973 paper have serious implications for present policy. William Nordhaus’ DICE model is one of three Integrated Assessment Models (IAMs) that the Obama Administration’s Working Group selected to estimate the “social cost of carbon.” This value in turn is used by EPA and other federal agencies to run cost/benefit analyses on proposed regulations. It is extremely alarming, to say the least, that the same guy who claimed in 1973 that optimal resource usage would have the U.S. “virtually exhaust” its domestic petroleum supplies over the next seven years, is one of three experts who are implicitly influencing regulations with his model of world energy markets that runs through the year 2300.

When it comes to Alan Greenspan warning about budget deficits, price inflation, and the need to cut government spending, Paul Krugman is happy to ask, “So has the ex-Maestro reconsidered his views after having been so wrong for so long? Not a bit.” Too bad Krugman won’t apply the same criterion to Nordaus, who thinks his computer simulations provide justification for imposing massive new taxes on the energy sector.

[1] To be clear, Nordhaus’ table isn’t a prediction of the actual future, but rather of the future under “optimal resource usage.” Yet Krugman himself in his book review speaks of Nordhaus’ predictions and how badly they fared; Krugman is not using the “optimal path” subtlety to defend the predictive accuracy.