In the January 2017 issue of the journal Science, Barack Obama has an article entitled, “The irreversible momentum of clean energy.” Unfortunately, the article is long on symbolism but short on substance. In particular, Obama praises the economic growth under his tenure, when by one metric it was the worst since Herbert Hoover. Furthermore, Obama ignores the IPCC’s own numbers when arguing that further mitigation policies are cost-effective. Finally, Obama’s rhetoric about “irreversible momentum” suggests that there is little risk from a Trump Administration reversing course on energy policy.

Obama’s Economy Is No Model to Emulate

Early in his article, Obama argues that the economic performance of the United States during his two terms somehow proves the critics wrong, who warned that government intervention in the transportation and energy sectors would harm economic growth. Here’s Obama:

Since 2008, the United States has experienced the first sustained period of rapid GHG emissions reductions and simultaneous economic growth on record. Specifically, CO2 emissions from the energy sector fell by 9.5% from 2008 to 2015, while the economy grew by more than 10%. In this same period, the amount of energy consumed per dollar of real gross domestic product (GDP) fell by almost 11%, the amount of CO2 emitted per unit of energy consumed declined by 8%, and CO2 emitted per dollar of GDP declined by 18%.

The importance of this trend cannot be understated. This “decoupling” of energy sector emissions and economic growth should put to rest the argument that combatting climate change requires accepting lower growth or a lower standard of living. [Obama 2017, bold added, endnote omitted.]

Now to be sure, there are many factors that influence economic growth, and economists still hotly dispute the impact of particular federal government and Federal Reserve policies.

Even so, taking Obama’s argument at face value, the last thing he should be doing is holding up the economic growth of the United States as evidence of the harmlessness of energy interventions. For example, if we look at the percentage growth in annual real GDP, we see that the eight years of the Obama Administration have the lowest ceiling going back to the start of the data set in 1930:

In particular, barring a 4th quarter 2016 number that comes in much higher than expectations, the Obama years will be the first time since Herbert Hoover where a president presided over an economy never hitting an annual real GDP growth rate of 3 percent. (Even PolitiFact grudgingly admits this awkward observation.)

To reiterate, there are many things that influence a country’s economic growth. But if Obama wants to point to real GDP growth as the criterion for whether his energy policies act as a drag, isn’t the above chart consistent with the warnings of his critics?

Obama Cites Benefits, But Not Costs, of Government Intervention

Obama then deploys a familiar rhetorical trick in this policy debate, by citing the alleged harms of unrestricted climate change, without discussing the economic impacts of government policies to mitigate it. Here’s Obama:

[E]vidence is mounting that any economic strategy that ignores carbon pollution will impose tremendous costs to the global economy and will result in fewer jobs and less economic growth over the long term. Estimates of the economic damages from warming of 4°C over preindustrial levels range from 1% to 5% of global GDP each year by 2100.

As a result, it is becoming increasingly clear that, regardless of the inherent uncertainties in predicting future climate and weather patterns, the investments needed to reduce emissions—and to increase resilience and preparedness for the changes in climate that can no longer be avoided—will be modest in comparison with the benefits from avoided climate-change damages. [Obama 2017, bold added.]

Even though he provides estimates of the “tremendous costs to the global economy” from unrestricted carbon dioxide emissions—which he says are in the range of 1% to 5% of global GDP—Obama doesn’t tell us what the leading modelers estimate as the cost of compliance with regulations that restrict emissions.

According to the latest IPCC report (as we demonstrate in this previous IER post), the median estimate of the economic cost of limiting global warming to 2 degrees Celsius is 4.8% of GDP by the year 2100. So using Obama’s own statements, he should consider mitigation measures to impose “tremendous costs on the global economy.” In fact, using the very numbers from the latest IPCC report, one can show that the “consensus” middle-of-the-road projections of costs and benefits from climate mitigation policies cannot justify the popular 2-degree warming ceiling.

In the context of his article, it appears that Obama’s rhetorical strategy was first to argue that policy interventions in the energy sector imposed no real harm on economic growth (and he used his Administration’s performance as “proof”), and second he then outlined some of the estimates of damages from unrestricted emissions. Obama thought that this was a good argument to conclude that further interventions were well worth it.

However, there are two problems here. First of all, we’ve already seen that Obama did not prove his policies were harmless: By one measure he’s had the worst economy since Herbert Hoover. Second, even if it were true that the energy interventions under Obama were compatible with robust economic growth, that alone wouldn’t justify the case for more aggressive goals, such as limiting global warming to 2 degrees Celsius. After all, Obama wants the U.S. government to do more than what his Administration has already done. So even on his own terms, the impact of energy interventions during the Obama years doesn’t tell us whether chasing more ambitious emissions cutbacks would pass a cost/benefit test. And indeed, using the “consensus” findings in the latest IPCC report, we can show that such aggressive measures are not justified.

If Trends Have “Irresistible Momentum,” Then Critics Should Stop Lecturing Trump Administration

Later in his article, Obama unwittingly explodes the case for US action on climate change. For example, Obama writes:

Beyond the macroeconomic case, businesses are coming to the conclusion that reducing emissions is not just good for the environment—it can also boost bottom lines, cut costs for consumers, and deliver returns for shareholders.

Outside the United States, countries and their businesses are moving forward, seeking to reap benefits for their countries by being at the front of the clean-energy race…The Paris Agreement entered into force in less than a year, and, at the follow-up meeting this fall in Marrakesh, countries agreed that, with more than 110 countries representing more than 75% of global emissions having already joined the Paris Agreement, climate action “momentum is irreversible.” [Obama 2017, bold added, endnotes removed.]

Let’s stipulate for the sake of argument that all of Obama’s claims are correct. In that case, the incoming Trump Administration should not worry climate change activists in the slightest. After all, if American “businesses are coming to the conclusion” that reducing emissions is good for their shareholders, then the government doesn’t need to pass mandates to force them to continue with this profitable strategy.

Furthermore, if the “momentum is irreversible” for countries around the world to pursue lower emissions, then what the United States does is irrelevant. The dirty little secret in the climate change debate is that US emissions are not decisive in the grand scheme. For example, in this earlier IER post, we relied on help from climate scientist Chip Knappenberger to run a computer simulation using a popular “business-as-usual” emissions scenario (A1B) to calculate the following: 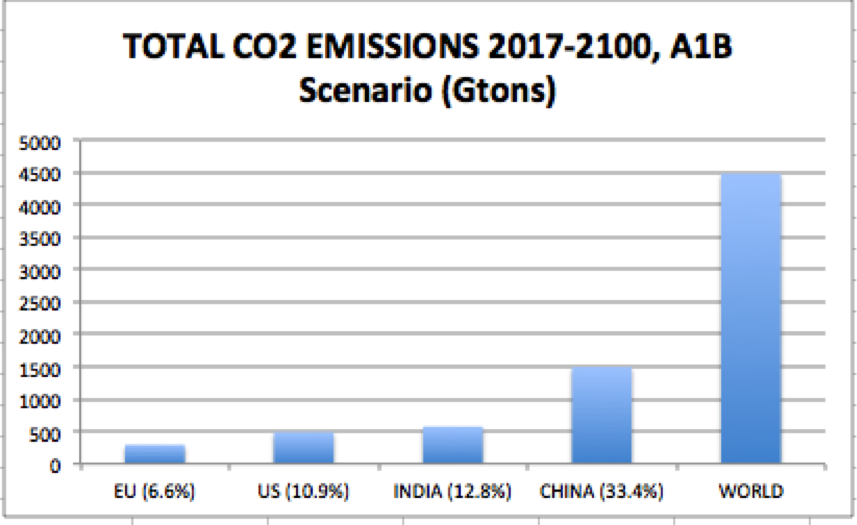 For another calculation, climate scientists Pat Michaels and Chip Knappenberger used a standard model to estimate that even if the US phased out all carbon dioxide emissions by the year 2050, then the global temperature in the year 2100 would be 0.1 degrees Celsius cooler than it otherwise would be.

As these figures prove, what the United States does on climate change policy has very little direct impact on the outcome. That’s why all along the advocates of aggressive US policy had to cite the importance of “American leadership.” They had to argue that China and India, for example, would never go along with sharp emissions cuts if they perceived that the US wasn’t following suit.

But now comes along Barack Obama (and plenty of other proponents of “green energy investments”) who assures us that other countries are moving ahead, with or without the US. Yet if that’s true, then the critics can stop warning us that a Trump Administration threatens the fate of the planet. At worst, it means US businesses will lose market share in the wind turbine industry. And that’s a business calculation that private CEOs can make, with their own shareholders’ money at stake.

In reality, it’s not at all clear that the momentum on items such as the Paris Agreement is “irreversible.” Because the Paris Agreement is non-binding, we can’t simply assume that countries will comply with their stated plans. And even if they do, emissions in some countries will increase at least for a while. For example, China, the world’s largest emitter of greenhouse gases, intends to keep increasing its greenhouse gas emissions through 2030, and then begin to reduce them. Non-industrialized economies believe that they need to be able to grow their economies and to provide electricity to their citizens that currently do not have access to it. Many are looking towards low-cost coal to provide that electricity and improve their country’s standard of living.

Even if the U.S. complies and implements all the policies that President Obama has put in place (e.g. so-called “Clean Power Plan”, ozone rule, onerous corporate average efficiencies for vehicles, etc.), the United States will only reach about 80 percent of the overall commitment that President Obama made for the United States of reducing greenhouse gas emissions by 26 to 28 percent (compared to 2005) by 2025. Furthermore, Obama’s regulations and policies towards achieving the commitment will result in higher prices for consumers—higher electricity prices, higher vehicle prices—and job losses in the energy sector, including bankruptcy filings in the coal industry.

In his article lauding the reduction in greenhouse gas emissions since 2008, President Obama ignores one of the most important drivers of that outcome. American ingenuity in the oil and gas sector—in particular, using hydraulic fracturing and horizontal drilling—to drill and produce these fuels has made the United States more energy independent and reduced greenhouse gas emissions by substituting natural gas for coal in the generating sector.

His policies, however, will result in the premature retirement of coal-fired power plants, reducing reliability while replacing many of those plants with intermittent wind and solar units, whose operation is dependent on the wind blowing and the sun shining.

So, in a nutshell, President Obama is making Americans pay more for energy and automobiles without any real net benefit just so that the Paris Agreement can become part of his legacy.

Reading President Obama’s piece in Science shows why there has been so much pushback against his policies. Despite his claims, economic growth has been very weak on his watch, and there are precious few benefits from the climate action he promotes according to the IPCC’s own models. But thank goodness President Obama, along with others, claim that there is “irreversible momentum of clean energy.” We are sure that this means that President Obama and others will support our call for the ending of all subsidies for energy including the wind PTC and solar ITC. After all, you don’t need to subsidize the irreversible.