For those interested in free markets in general and free-market energy policy in particular, the recent deal to avoid the dreaded “fiscal cliff” is quite disheartening. For one thing, the so-called fiscal cliff would barely have made a dent in government spending; the vast brunt of deficit reduction came on the backs of taxpayers. The deal makes the situation even worse, in this respect: it still jacks up taxes across the board, but couples it with giant increases in government spending. To add insult to injury, it throws in more sops to wind and other renewable industries, even though these cannot be justified in terms of sensible fiscal policy or economic efficiency.

Taxpayers, Not the Government, Would Have Jumped Off the Cliff

According to the CBO’s August forecast, Had the government sat back and let the country go over the metaphorical cliff, here’s what would have happened to government revenues and outlays (from Table 1-1): 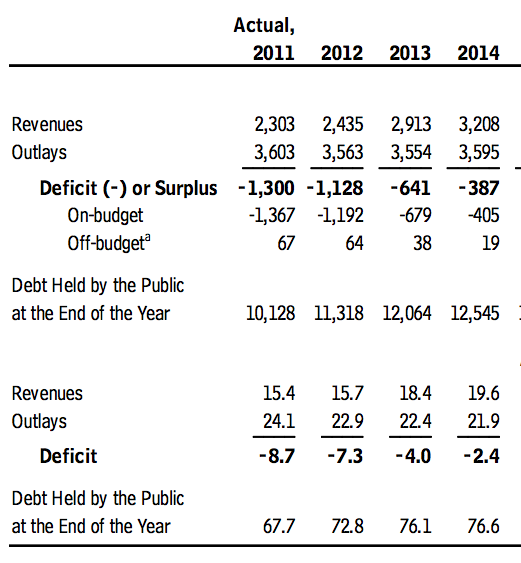 When interpreting the above table, keep in mind that Fiscal Year 2013 started on October 1. Thus, the way to assess the impact from going over the cliff, would be to compare the 2012 and 2013 numbers.

In the cliff scenario, the deficit in 2013 was projected to be $641 billion, down from the actual $1.128 trillion deficit in 2012, for a drop of $487 billion. (In reality this is probably optimistic, because the economy would not have grown as strongly as the CBO assumed, in light of the big tax hikes.)

In summary, according to the CBO’s estimates, if there had been no budget deal and we had gone over the “cliff,” the government would indeed have sharply reduced the budget deficit compared to its 2012 level. Of this $487 billion reduction in the federal budget deficit, the savings would have come through two mechanisms:

Are the above facts consistent with how the press and bloggers discussed the fiscal cliff? Hardly. They focused on the cuts to discretionary spending, without mentioning that these would be more than offset (from 2014 onward) by increases in “mandatory” spending and interest payments on the federal debt.

The fiscal cliff would have been awful all right—for taxpayers. Except for a one-year hiccup, the government still planned on spending more and more, as far as the eye can see.

But as bad as the fiscal cliff was, from the perspective of allocating the pain of deficit reduction between government and taxpayers, the new budget deal is worse. No surprise, everybody’s taxes are going up (because even lower-income workers are suffering from the expiration of the payroll tax break): 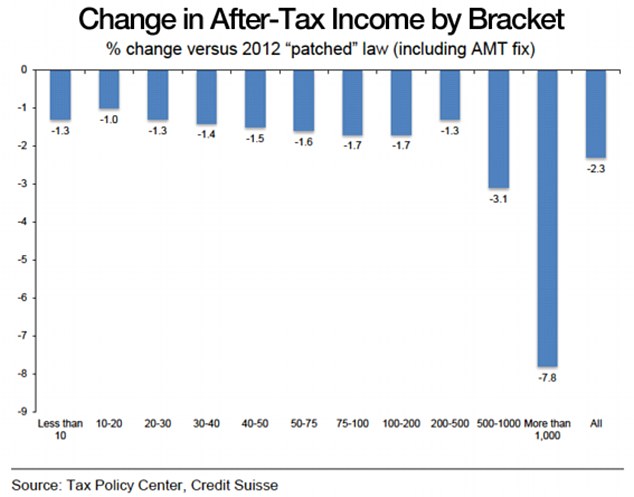 But thanks to the postponing of the “sequestration,” all of the big cuts to discretionary spending have been avoided. The CBO has prepared a summary of how the deal changes the revenue and expenditure outlook, but it’s tough to read because it’s relative to the baseline (i.e. the “cliff” scenario). What looks like a big tax cut in the CBO’s summary, is in reality a tax hike relative to 2012, because (to repeat) the CBO is scoring the new deal relative to the fiscal cliff baseline.

Adjusting for this subtlety, we can use the CBO’s latest summary to create the following table, showing the estimated revenue and expenditure outlook in absolute terms:

(Based on CBO August 2012 baseline forecast and summary of changes due to January 2013 budget deal.)

Thus, relative to Fiscal Year 2012 (which ended last September), in Fiscal Year 2013 the budget deficit will fall by $157 billion. This will be achieved through (a) a spending increase of $41 billion, and (b) a revenue increase of $198 billion. Some of the projected revenue increases are due to assumptions of economic growth, rather than tax rate hikes per se, but even so, the fact remains that under the new budget deal, the government is still going to fleece the taxpayers of even more money, while ramping up its spending. To top it all off, the projected deficit will still be just about a trillion dollars.

Quirky Elements of the Deal

The actual text of the Senate budget deal is an intimidating 157 pages, so you know there are lots of hidden treats for those willing to sift through it. Bloggers are having fun with the “Hollywood tax break,” speculating that it may be a reward for the celebrity support given to President Obama.

For those wanting a level playing field in energy markets, it’s important to note that the deal reinstates the biodiesel fuel tax credit, as a trade group celebrates:

The U.S. biodiesel industry applauded Tuesday as the U.S. House cleared a year-end fiscal package that reinstates the biodiesel tax incentive for 2012 and 2013. President Obama is expected to quickly sign the bill into law.

The $1-per-gallon biodiesel tax incentive was first implemented in 2005. Congress has allowed it to lapse twice, in 2010 and again in 2012. Under the legislation approved by the House on Tuesday and first passed by the Senate on Monday, the incentive will be reinstated retroactively to Jan. 1, 2012 and through the end of 2013.

The wind sector got a late Christmas present too with the expansion of the wind production tax credit (PTC). The bill not only extends the PTC for one year, but it also relaxes the requirements for receiving the credit. Previously, a wind project had to be placed “in service” before the end of the year, but now all that is required is for the project to be under construction by the end of the year. Some environmentalists believe that this is the same as a two or three year extension. This expansion of the projects eligible to receive the credit means that the credit will cost the U.S. Treasury a whopping $12.1 billion according to the Joint Committee on Taxation.

As we have explained in this forum many times, there is no justification—whether in terms of tax reform or overall economic efficiency—for the federal government to be hand-picking technologies for preferential tax treatment. Even if one wanted to use federal tax policy to correct an alleged “market failure” from carbon emissions, implicitly subsidizing rival technologies is an inefficient way to go about it.

Even if the government had let us plunge over the so-called fiscal cliff, there would have been major tax hikes and only the puniest of spending cuts. The recent budget deal combines the worst of all worlds: It still has big tax increases, coupled with spending increases, and still delivers a deficit of nearly a trillion dollars. Furthermore, the increases in tax rates on productive workers are accompanied by the reintroduction of gimmicky loopholes—such as tax breaks for “green energy”—even though this violates every principle of efficient tax reform, which the nonpartisan “experts” tell us we need.

Unfortunately, it seems that policymakers won’t seriously reform the US’s fiscal trajectory until an actual crisis breaks out in the bond markets, forcing their hand.

The Hidden Costs of Wind Power

Economics of the Bakken Oil Boom: What the Rest of the Nation is Missing