A November 2011 study[1] by the Analysis Group claims that the Regional Greenhouse Gas Initiative (RGGI) has showered $1.6 billion in “economic value added” to the ten participating states in the years 2009–2011. However, the study has several serious flaws, in that it (a) relies on massive consumer irrationality, (b) naively counts government expenditures as stimulating the economy without consideration of possible feedback effects, and—most ironically—(c) it has absolutely nothing to do with greenhouse gas limitations. Even if the claims of consumer irrationality and costless government stimulus were justified (which they aren’t), the methodology of the study would just as well “prove” that, say, a sales tax hike by the ten participating states would have allowed for the same “economic value added.” Policymakers in other states should therefore be very wary before accepting the Analysis Group’s claims in support of greenhouse gas legislation.

The most important point for policymakers to realize is that the study itself says that consumers paid higher utility bills because of RGGI during the three-year period analyzed. However, the study presents its information in a very misleading way; the average reader would probably think that the study showed consumers saved money.

Consider Figure ES2 from the Executive Summary, which shows the following grand totals for the costs and benefits of the RGGI program: 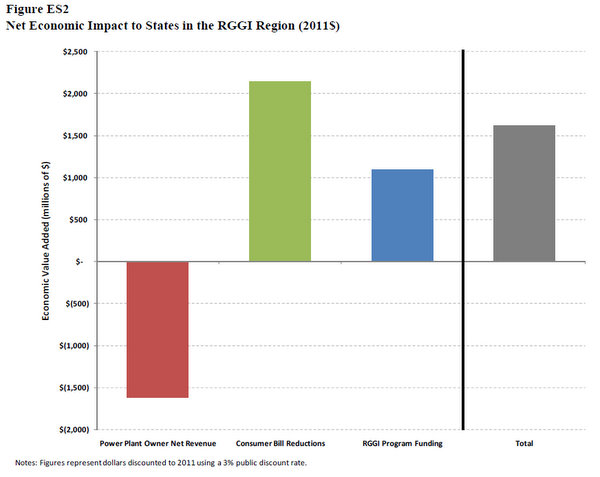 So we see that the RGGI plan (during the first three years of its operation) imposed roughly $1.6 billion in losses on power plant owners, but that these were offset by gains to consumers (in the form of bill reductions) of about $2.1 billion, and gains to the economy from RGGI Program Funding of about $1.1 billion. On net, therefore, the program gave benefits of about $1.6 billion. The Executive Summary then discusses each of these components in detail.

The text first discusses the savings to consumers and says:

Although CO2 allowances tend to increase electricity prices in the near term, there is also a lowering of prices over time because the states invested a substantial amount of the allowance proceeds on energy efficiency programs that reduce electricity consumption. After the early impacts of small electricity price increases, consumers gain because their overall electricity bills go down as a result of this investment in energy efficiency. All told, electricity consumers overall—households, businesses, government users, and others—enjoy a net gain of nearly $1.1 billion, as their overall electric bills drop over time…Consumers of natural gas and heating oil saved another $174 million. Figure ES3 shows the net bill reductions to consumers. [pp. 3–4] 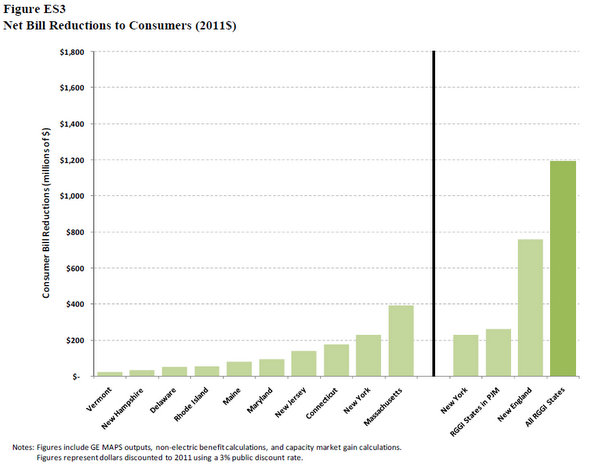 Already we see an apparent anomaly: The first figure (ES2) showed savings to consumers of $2.1 billion, which the next figure (ES3) shows savings of just under $1.2 billion. This is a very large discrepancy, to which we will return in a moment.

But first, we must resolve the issue of when consumers save money. The two graphs—especially since the study is touted as one that “follows the money” and is apparently evaluating the actual experience of the years 2009–2011—give the impression that the consumers in these states already benefited from these savings.

Yet this isn’t true. The main text is vague, even choosing its verb tenses in a confusing way. (For example saying electricity consumers “enjoy a net gain of nearly $1.1 billion,” making it sound as if the gain is currently being reaped.) Footnote 6 makes things a bit clearer, though not much:

During the 2009–2011 period, we estimate that RGGI increased consumers’ overall payments for electricity by 0.7 percent; over the long run, however, this investment, which states used to support a variety of economic activity (of which approximately 48 percent went to support energy efficiency programs) led to net savings in electricity bills to all consumers in all states, relative to an electric system that did not include RGGI for the 2009–2011 period.  [Bold added.]

Again, make note of the misleading verb tenses. The footnote clearly admits that during the actual period for which we have real numbers, i.e. 2009–2011, electricity bills went up because of the program. Yet then it says “over the long run” the investment “led to net savings,” as if those were observed to have occurred. Yet this is impossible, for the simple reason that the study was published in late 2011.

Here’s what is happening: The Analysis Group study ran two different computer simulations of the economies of the participating states, first with the RGGI program and then without. In the computer simulations, the first run (with RGGI) led to higher electricity prices for a few years, and then lower prices, compared to the simulation baseline that had no RGGI program. Using a discount rate of 3 percent, the study authors conclude that electricity consumers in the simulation with RGGI would save about $1.1 billion in present-value terms, measured in 2011 dollars.

In other words, the only benefits of RGGI that the Analysis Group found were the results of models, not actual experience. They did find, however, find that electricity prices have already increased because of RGGI.

In the previous section we briefly made note of an apparent inconsistency between the two charts in the Executive Summary. The first chart (ES2) showed savings for consumers (via bill reductions) of $2.1 billion, while the second chart showed savings of a little less than $1.2 billion. The Executive Summary doesn’t explain the discrepancy, but if we dig into the meat of the paper, it apparently flows from the distinction between direct, indirect, and induced benefits. Figure 12 makes this clearer: 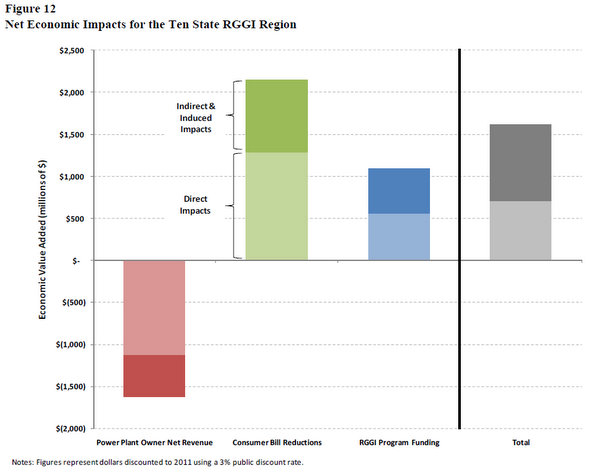 In macroeconomic studies of this nature, direct effects refer to the increased economic activity from a particular cause, whether a tax cut, boost in government spending, or (in this case) reduction in utility bills. The indirect and induced effects refer to the increased spending flowing from these direct effects, including the extra spending from workers who are now employed or who have higher incomes because of the original round of effects. Thus the Analysis Group study is apparently claiming that the direct savings of $1.2 billion to consumers (in the form of reduced utility bills) leads to an additional $900 million in benefits to the economy as this spending ripples through various sectors.

We see a similar pattern with the blue rectangle, denoting the government expenditures of the auction revenues from the RGGI program. There are first of all the direct economic benefits from the original expenditures, and then the indirect and induced benefits as this original government activity leads to further rounds of spending.

There are two major problems with this analysis. In the first place, even on its own terms, the alleged indirect and induced impacts of the consumer savings make no sense because…the consumers have yet to see those savings. Remember, through 2011 thus far, the consumers are actually poorer because of the RGGI program—footnote 6 quantified it precisely as bills being 0.7 percent higher. So these “indirect” and “induced” impacts are themselves still pure conjecture; we actually would currently see negative impacts because the consumers are having to cut back their spending elsewhere (due to higher utility bills), meaning those sectors will have to lay off workers, etc. etc. in outward ripples.

Yet there is another major problem with the basic premise of this approach. Simply put, the Analysis Group study is quite naively claiming that if the government raises $1 billion from one sector of the economy (in this case, by auctioning off permits to do something—emit greenhouse gases—that previously was free of charge), and then spends that $1 billion in another sector of the economy, that somehow total GDP is higher and jobs are created on net. On the face of it, this is nonsensical, akin to using a bucket to take water from the deep end of a swimming pool and dumping it in the shallow end, hoping to raise the level of the water.

To be sure, there are sophisticated “New Keynesian” models of the economy in which government taxing and spending could boost total output in this fashion, if the economy happened to start in a position of large-scale unemployment. Yet the Analysis Group study makes no mention of these caveats. The average policymaker would get the impression that these alleged “economic value added” benefits are available to any taker with the wisdom to implement a comparable greenhouse gas program. But clearly, if a state already starts out with a fully-employed labor force, then no amount of shuffling of money can create jobs on net. We then fall back to the more fundamental question: What institution is more likely to create efficient, well-paying jobs: the private sector or the political sector?

The True Irony: The Alleged Benefits of RGGI Have Nothing to Do With Greenhouse Gases

In the previous sections we have demonstrated that the Analysis Group’s study derives its alleged benefits of the RGGI program from conjectural simulations of as-yet unrealized savings to consumers in the form of lower utility bills, and from the simulated benefits of government investment spending. We have given reasons to doubt each of these claims.

However, suppose for the sake of argument that the claims are correct, and that a state government can help its citizens by (a) taking money from them and then offering it back to them in exchange for energy-saving renovations that the citizens would be too shortsighted to implement if they weren’t forced to do so by their political leaders, and (b) spending money on various initiatives that will yield multiple times the benefits of the amount taken out of the economy.

If both (a) and (b) were true (however implausible it may be), then the same alleged net benefits could be realized by any tax and spending scheme. For example, if the ten RGGI states hadn’t implemented a greenhouse gas auction program, but instead had decided on a joint system of hiking their sales taxes, and then they spent the extra funds in exactly the same ways that the RGGI states have spent the money from auctions, then the Analysis Group results should be largely the same. The only main difference would be that retailers in general would suffer from lower revenue (due to the higher sales taxes), as opposed to the losses falling just on utilities. Consumers would suffer from higher retail prices, but these losses would be more than offset by their savings on utility prices—because by assumption, the states would be spending the sales tax revenues to motivate consumers to undertake energy conservation measures.

Because RGGI’s greenhouse gas emissions reductions would be so much smaller than Waxman-Markey, the climatic impact will be much smaller as well. While RGGI will not impact the climate in any meaningful way, the program is already leading to higher electricity prices.

The November 2011 Analysis Group study on the first three years of RGGI is severely flawed. Most important is the fact that it claims savings for consumers that are (a) based on irrationality and (b) only exist in computer simulations. Moreover, the study derives massive benefits from government spending while not adequately modeling the possible offsetting losses to the sectors from which those revenues are coming. Finally, even if we ignore these problems and assume these mechanisms are valid ways of generating net economic benefits, we still would have no justification for embodying them in a greenhouse gas emissions program. The same results could be achieved through any scheme of government taxation and spending. The fact that the Analysis Group study omits any claimed benefits from mitigated climate change shows how pointless it is to tackle a global problem with an extremely regional “solution.”

[7] Chip Knappenberger, Climate Impacts of Waxman-Markey (the IPCC-based arithmetic of no gain), MasterResource, May 6, 2009, http://www.masterresource.org/2009/05/part-i-a-climate-analysis-of-the-waxman-markey-climate-bill%E2%80%94the-impacts-of-us-actions-alone/.

Coal: Not Part of the Obama "All-of-the-above" Strategy