Air quality in the United States is getting cleaner, but sadly many Americans believe the opposite. In order to explain the reality of America’s improving environmental quality, Steven Hayward has spent years compiling environmental data with his Almanac of Environmental Trends. Recently he released an update using data from the Environmental Protection Agency to chronicle the astonishing reductions in air pollution in the last few years alone.

Hayward explains that technology and Mother Earth are not enemies—innovation has significantly improved environmental quality. Technological advancements have played a far more potent role than regulations in advancing environmental goals. He points out that “process efficiency” (including practices such as more complete fuel combustion and innovations such as power plant “scrubbers,” control technologies, and catalytic converters on vehicles) has significantly reduced emissions without substantial government involvement. Air pollution, in fact, began declining in the mid-1960s, prior to the first Clean Air Act[1]

Economic growth and environmental improvement has gone hand in hand over the last few decades as this chart from EPA shows: 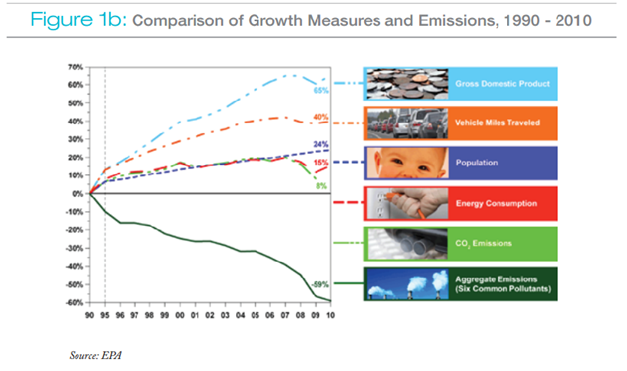 Another way explain the improvement in air quality is with EPA’s Air Quality Index (AQI). The AQI is a metric EPA used to declare “healthy” air days for sensitive people such as the elderly, children, and people with respiratory problems. Recent AQI numbers show that the number of cities that experienced an AQI above the threshold level of 100 has dropped in the last 20 years. While in 1990, roughly 4000 days each year experienced AQIs over 100, by 2010, only about 1000 days reported AQIs above 100. The graph below also reveals an overall negative trend of AQIs above 100 over time[2]. 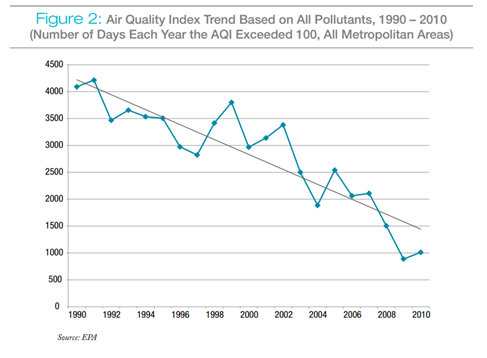 Emissions refers to the amount of pollutant that man-made activities generate – in other words, the amount of stuff that comes out of a smokestack or automobile tailpipe or other sources…Ambient level refers to the actual concentration of a pollutant in the air…emissions are estimated, using sophisticated modeling techniques, while ambient air quality is monitored through several hundred sampling stations throughout the U.S.[3]

Hayward can hardly be accused of information distortion or bias, because most of his data comes straight from the EPA itself, and the only other primary sources used come from the Department of Energy, the Energy Information Administration, the California Air Resources Board, the European Environmental Agency, the U.N. Environment Agency, and the World Bank. In fact, some of Hayward’s most powerful numbers come from the EPA’s 2011 report on air status and trends[5]. Interestingly, though, the EPA did not issue a press release to highlight on this particular report. Furthermore, Hayward’s only secondary sources come from the International Study of Asthma and Allergies in Childhood and the Centers for Disease Control.

We have reason to be optimistic about the ability of human ingenuity to solve environmental challenges. Technology is not the enemy of nature, but rather can be its friend. If people are afforded the opportunity to innovate, they will, creating a more efficient future. History proves that restricting market creativity would be a mistake.

MURPHY: Using the CBO Report to Critique a US Carbon Tax