Administration officials and many Congressmen have touted that we are losing the “clean energy” race with China. One of their metrics is spending on “clean energy” investments. Another is on the amount of renewable capacity that has been built. Let’s see how the race is playing out.

In 2011, the United States spent more on renewable energy than China, beating China’s “clean energy” investment for the first time since 2008. In 2011, the United States spent a total of $55.9 billion of government and private funds on “clean energy” projects, a 33 percent increase from 2010, compared to China’s $47.4 billion, 1 percent higher than in 2010.

The higher U.S. “clean energy” investment was due to federal government support that included the Treasury Department’s 1603 cash grant program that expired at the end of December 2011, paying as much as 30 percent of the project’s development and construction cost, and the Production Tax Credit offering 2.2 cents a kilowatt-hour for wind production over the next ten years for wind power operational by the end of this year.

The Federal Financing Bank completed 13 loans worth $10.1 billion for “clean energy” projects, according to a study of the industry’s top 20 lenders by Bloomberg New Energy Finance.[i] And, budget experts estimate that the production tax credit cost taxpayers about $1 billion a year.

There is no guarantee these subsidies will pan out. Last year, three U.S. solar companies, including Solyndra, benefiting from U.S. government loans, went bankrupt, in part due to increasing competition from Chinese manufacturers. Besides these solar companies, Ener1, a battery maker that had received a $118 million government grant went bankrupt as well.

Globally, renewable energy investment rose 5 percent to a record $260 billion in 2011 driven by a surge in solar developments and the increased spending in the United States. New spending on solar energy increased 36 percent to $136.6 billion in 2011, almost twice what was spent on wind power ($74.9 billion).[ii]

In 2009, the financial crisis curbed lending and global renewable energy investment increased by only 1 percent. In 2010, however, global renewable energy investment increased 31 percent, reaching $247 billion. The slower growth in 2011 was in part due to European countries reducing their guaranteed rates for electricity produced from renewable technologies so that electricity prices would not continue to surge due to their renewable pricing policies.

China plans to obtain 11.4 percent of its electricity from non-fossil fuels by 2015, up from 8.4 percent in 2010. This plan is part of China’s goal to reduce carbon intensity (carbon dioxide emissions per unit of gross domestic product) by 17 percent in 2015. While some countries are dubious regarding nuclear power, China sees it as a safe, reliable, and mature source of energy and is including nuclear production in its 2015 goal.[iii]

Chinese manufacturers are undercutting European and U.S. manufacturers in solar and wind technology markets. Supposedly, China is not just manufacturing wind turbines for export to U.S. and European markets, but it is also building the units to generate electricity in China. Let’s see how much those wind units are contributing to China’s electricity needs.

In 2010, China produced 50.1 billion kilowatt hours of wind powered electricity while the United States produced 94.65 billion kilowatt hours from wind energy.[iv]  That lower amount of wind generated electricity for China is due to its transmission system not being able to handle the growth in wind capacity. Past statistics have shown that only about 30 percent of China’s wind units are connected to the grid. While China may have improved on this low number of wind units integrated with its electricity grid, the country clearly has still not solved the problem. 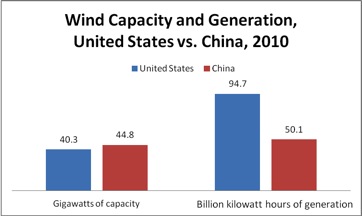 Obama Wants a Level Playing Field? Not in Energy Sector