An op-ed in The Hill from the R Street Institute showcases yet again the shifting goal posts in the carbon tax debate. Before Donald Trump won the White House, a few vocal writers urged conservatives and libertarians that only by offering a massive new carbon tax, could they hope to win the rollback of top-down environmental regulations. Yet now that the Trump Administration is moving forward on such a rollback, the argument (from R Street and others) is that we should still go ahead with a carbon tax anyway. Besides the shifting rhetoric, these appeals also mislead readers on just how damaging a carbon tax would be to the economy—as even its supporters implicitly admit with their own models.

R Street Wants to Snatch Defeat From the Jaws of Victory

Catrina Rorke, R Street senior fellow and author of The Hill op-ed, pitches Republicans on a carbon tax in this way:

[I]f the administration is serious about getting tax reform over the finish line, [a Value Added Tax or a carbon tax] would be two pretty good bets to raise revenue.

In 2010…deficit reduction was the cause du jour. While the debate ultimately resulted in budget sequestration…a number of commissions…assembled proposals to improve fiscal discipline and reform the tax code. Of the seven most prevalent proposals, four included revenue from either a gas tax or carbon price…

A carbon price…fits well into the administration’s other plans. As part of the campaign, President Trump promised again and again a new way forward on regulation and energy. In an executive order last week, Trump ordered the substantial rollback of a number of regulatory policies to address carbon emissions, on top of a requested 31 percent cut to the Environmental Protection Agency’s budget…

If this year’s health-care debate proved anything, it’s that efforts to roll back Obama-era policies are highly susceptible to political backlash….Pairing permanent removal of the EPA’s authority to regulate carbon emissions with a transparent carbon price might take the fire out of potential protests, give the GOP the upper hand in a major environmental-policy fight and bring moderate Democrats into the fold on tax reform.

Moreover, carbon pricing can raise serious revenue. A 2013 estimate from the Congressional Budget Office suggested that a carbon tax could raise $1.2 trillion over 10 years…R Street research suggests that even a relatively modest carbon price actually could replace corporate taxes entirely, turning the United States into the most competitive investment climate in the world. [Emphasis added.]

Notice the attempt to spin history in a way that undercuts the clear-cut victories for limited government. Rorke’s own narrative admits that during the 2010 battle, the resolution ultimately involved large cuts (“large” by Washington standards) to federal spending; Paul Krugman at the time called the sequester a “fiscal doomsday machine,” such was his panic over the austerity.

Moreover, Rorke’s own narrative admits that President Trump has already ordered the regulatory rollbacks and proposed EPA spending cuts that were supposed to be the prize for giving in on a carbon tax. On the issue of top-down environmental regulation, conservatives and libertarians just picked up their flush and now Rorke is advising them to fold.

A Carbon Tax Will Hurt the Economy

Of course, Rorke’s op-ed soon enough reveals the real reason policymakers may be tempted to go down the carbon tax path: gushers of money. The American public has been subjected to a long campaign of claims that a “revenue neutral” carbon tax can provide a “win-win,” where we mitigate the potential dangers of climate change while at the same time spurring conventional economic growth through offsetting tax cuts.

Yet even using the very models from the pro-carbon tax camp, promises of a “win-win” outcome rest on impossible political scenarios. Consider a chart from a 2013 Resources for the Future (RFF) study (source and analysis here)—and keep in mind that RFF as an organization is favorable to a carbon tax. 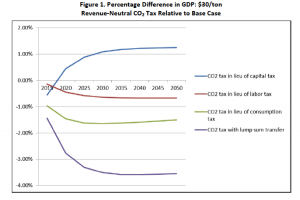 Only if all $1.2 trillion over ten years in new revenue from a hypothetical carbon tax were devoted entirely to reducing taxes on capital (e.g. the corporate income tax, and personal taxes on dividends and capital gains), does the RFF simulation show the economy benefiting from the “tax reform.”

So you have to ask yourself: Are environmental groups and other progressives going to abide by this type of outcome? Are they really going to sign on for a deal where gasoline and electricity prices rise substantially (because of the new carbon tax), but where poor households don’t get any tax breaks because all of the trillion-plus in new revenue is devoted to lowering the tax bill for hedge fund managers?

At this point, these aren’t even hypothetical questions. The recent ballot proposal for a revenue-neutral carbon tax in Washington State showed that progressive groups do not endorse the idea—and that particular scheme involved a cut in the sales tax and an increase in the Working Families Tax Rebate. You can imagine how unpopular the Washington proposal would have been, had it directed all carbon tax receipts to cutting taxes on corporations and capitalists.

Policymakers and the public need to step back and realize they are being conned. The people pushing for a “carbon tax swap deal” have shifted their arguments; conservatives and libertarians have already achieved fiscal and regulatory victories that they were told would be impossible.

In any event, imposing a new carbon tax would cause great pain to the economy, and rising energy prices would impact poor households in particular. If the carbon tax advocates want to admit that honestly and say that the avoided climate change damages (accruing 50+ years into the future and beyond) justify the present pain, fair enough; we can have that debate. But so far many of the most prominent pro-carbon tax voices are misleading Americans on the actual impacts of their plan.

Governor Cuomo Objects to Pipelines Despite Acknowledging their Necessity