Many of the responses critical of President Trump’s “skinny budget” actually show why the President’s budget is the right way to go. A good example is a blog post by Jeff Navin, the former Acting Chief of Staff and Deputy Chief of Staff at the United States Department of Energy during the Obama administration. Navin is obviously an expert on the Department of Energy’s activities and he understands global energy trends, but if the economic opportunity is as big as Navin suggests, then we do not see a need for the federal government to be involved.

Navin is also concerned because American businesspeople won’t be able to figure out business opportunities without the benevolent hand of federal spending. He continues:

the most catastrophic effect of this proposal is obviously for climate change, but there are other reasons to protect energy R&D programs—ones even a conspiracy-minded climate denier could embrace. As the global population increases from 7 billion to 9 billion people, and as the developing world looks to increase its standard of living, the market for energy will grow dramatically. These markets include cities in China that are working now to reduce horrific levels of air pollution, communities in India seeking comforts like air conditioning, and growing communities in Africa looking for reliable electricity to run their homes and businesses. The International Energy Agency (IEA) estimates that this market opportunity will reach $90 trillion by 2030.

It isn’t obvious why new energy technologies are needed for the market opportunities he is talking about. For example, in the U.S., we are already using the pollution control technologies that, if China adopted, would dramatically reduce pollution. Consider the following chart from EPA: 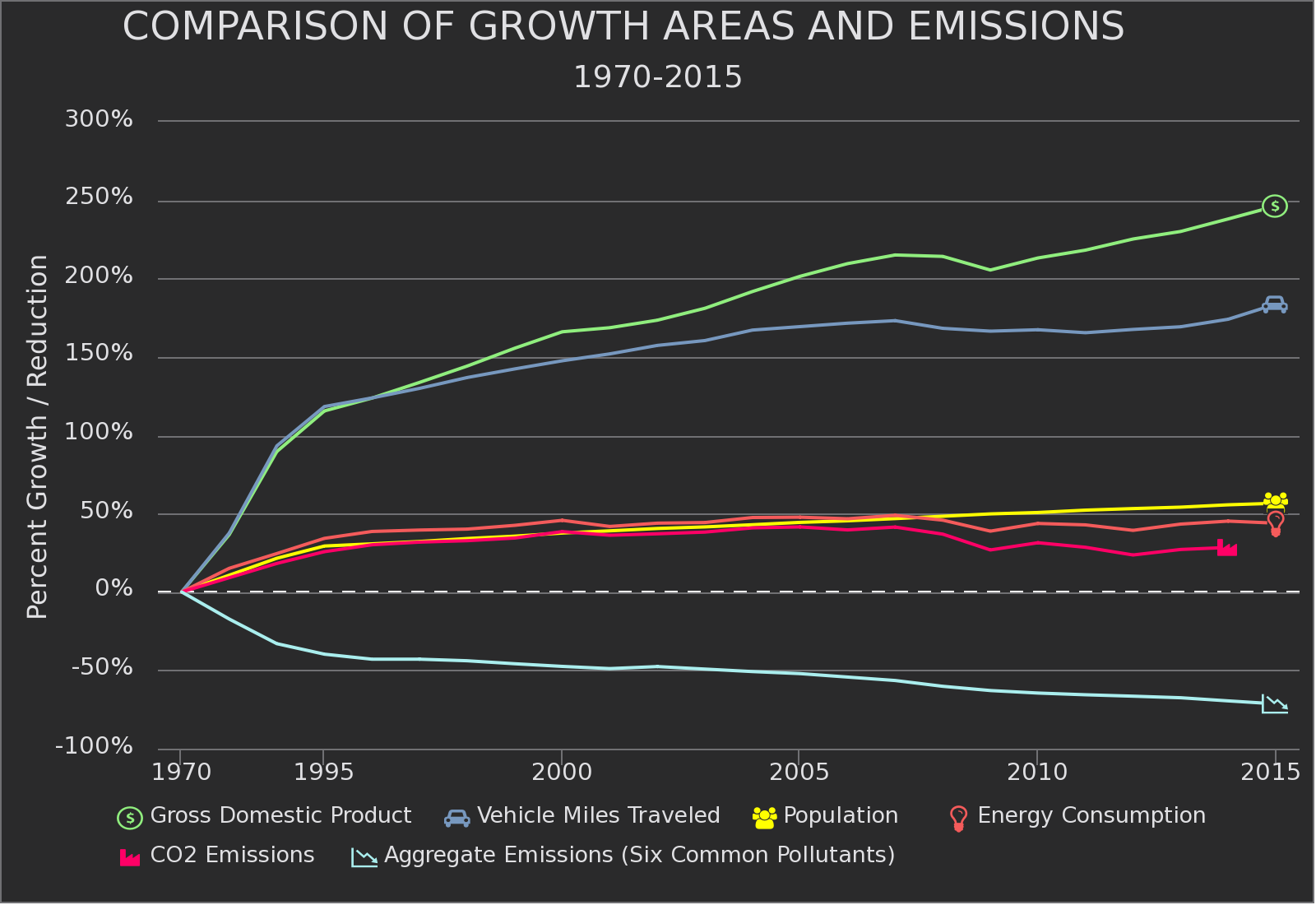 Since 1970, pollution emissions have fallen 71 percent even as GDP grew by 246 percent, vehicle miles traveled increased by 184 percent, and energy consumption increased by 44 percent.

Navin mentions that people in India are seeking comforts like air conditioning. This is certainly true, but solar frequently fails to provide a robust electricity generating system. Consider this story from E&E Publishing:

Dharnai, a community of about 3,200 people in eastern India’s Bihar state, had been without electricity for three decades. So when activists with Greenpeace set up a solar-powered microgrid in July of 2014, the excitement was palpable. But, residents said, the problems started almost immediately.

When the former chief minister of Bihar state visited to inaugurate the grid, villagers lined up to protest, chanting, “We want real electricity, not fake electricity!”

Indians, like Americans, want a robust electricity system. We have the technology today to build clean, reliable coal-fired power plants in places like China, India, and Africa to provide the reliable electricity that people desire. The Department of Energy does not need to spend billions of taxpayer dollars to make that happen. The technology exists today and as long as people can recoup their investments, private companies will need the infrastructure necessary.

Navin probably understands the point that the technology to power the world already exists, but instead, he wants energy sources that do not emit carbon dioxide and laments that businesses won’t seize the profit opportunity he believes exists without billions of taxpayer dollars. He writes, “Many countries with fossil resources are looking for ways to generate power from gas and coal without emitting CO2. But instead of investing in our best and brightest to develop the technologies we can sell to the world, we’re making deep cuts that will cede much of this market to our competitors.”

This statement looks like a synopsis of how the Obama administration viewed businesses. The best and brightest are employed by the government and private companies aren’t smart enough to get engaged in what Navin calls a $90 trillion market opportunity.

Unlike Mr. Navin, we believe that a $90 trillion market opportunity is large enough to attract billions, if not trillions, of dollars in private investments. So why is there a need for spending billions of taxpayer dollars through the Department of Energy? That isn’t at all clear.