Wyoming has the smallest population of any state–only Alaska has fewer residents per square mile. The state is the largest coal producer in the nation and also produces natural gas and petroleum. Wyoming supplies more energy to the nation and has more producing federal oil and gas leases than any other state. The largest industry in Wyoming is energy extraction. Fossil fuels are produced in 22 of Wyoming’s 23 counties. Mineral royalties, severance, and related taxes typically provide a substantial portion of the state’s revenues.

The industrial sector uses more than half of all energy consumed in the state with the transportation sector consuming over one-fifth, giving Wyoming the highest per-capita energy usage of any state and making it among the most energy-intensive state economies. 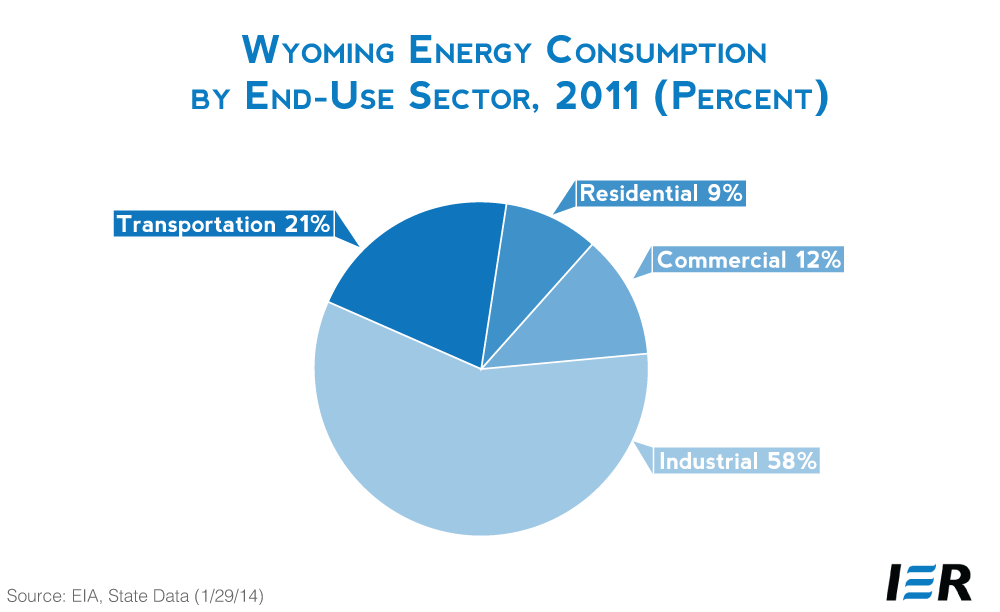 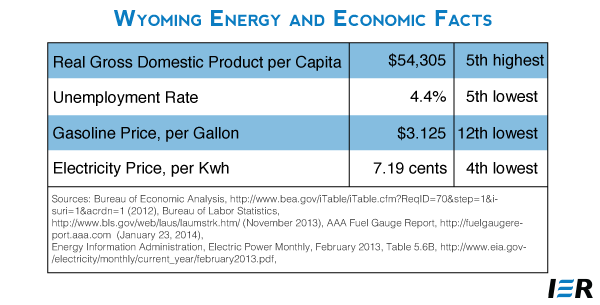 Wyoming has more than one-third of the total recoverable coal reserves at producing mines in the United States. The state leads the nation in coal output, producing 40 percent of the coal mined in the United States. Wyoming’s coal is primarily mined from the Powder River Basin, where the eight largest U.S. coal mines are located. The Powder River Basin contains thick seams of sub-bituminous coal at shallow depths, which are very conducive to large-scale surface mining.

Coal is shipped from the Powder River Basin to electricity generating plants in more than 30 states via unit trains. The Joint Line is the primary railroad route for transporting coal from the Powder River Basin. Since 2005, the railroad owners have added parallel tracks to decrease congestion and minimize shipping delays after an earlier three train derailment that severely damaged the rail line and temporarily halted coal shipments.

Due to onerous regulations from the Environmental Protection Agency, coal consumption is expected to decline as coal-fired electricity generating units are prematurely retired. In the longer term, coal consumption is expected to increase, particularly for Wyoming’s low-sulfur coal, which helps to meet air quality standards for criteria pollutants. Wyoming has the world’s largest resources of trona, a mineral used in dry sorbent injection technology that is used to meet federal mercury emission standards.

Wyoming is the fifth largest natural gas-producing state in the nation, accounting for 8 percent of U.S. production, with two-thirds of its natural gas produced on federal leaseholds. While natural gas production occurs throughout the state, most of Wyoming’s natural gas is produced in the southwest part of the state in the Greater Green River Basin. Wyoming has a dozen of the country’s largest natural gas fields, including the Pinedale and Jonah fields that rank among the top 10 in the nation. Natural gas exploration has been expanding into central and eastern regions on the state, including the Powder River Basin. 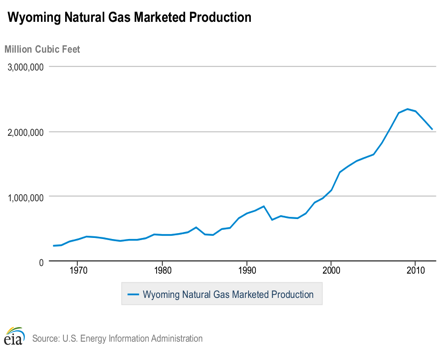 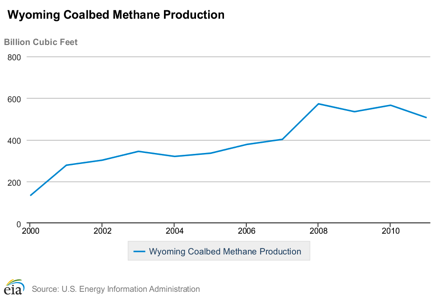 Wyoming accounts for almost 3 percent of U.S. crude oil production and about the same percentage of proven reserves. Oil producers are applying new drilling technologies, increasing oil production in eastern Wyoming, including the Niobrara Shale north of Colorado and the southern parts of the coal-rich Powder River Basin. 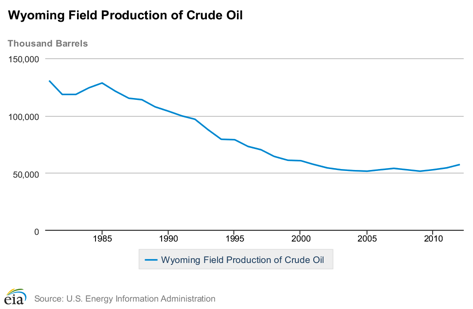 Wyoming is also one of 3 U.S. states rich in oil shale, a kerogen formation in the Green River Basin and the Great Divide Basin. Because current technology for obtaining petroleum products from kerogen is being developed and the Obama Administration has taken steps to limit its development on the federal lands where most of the oil shale exists, extraction is not yet being pursued commercially. 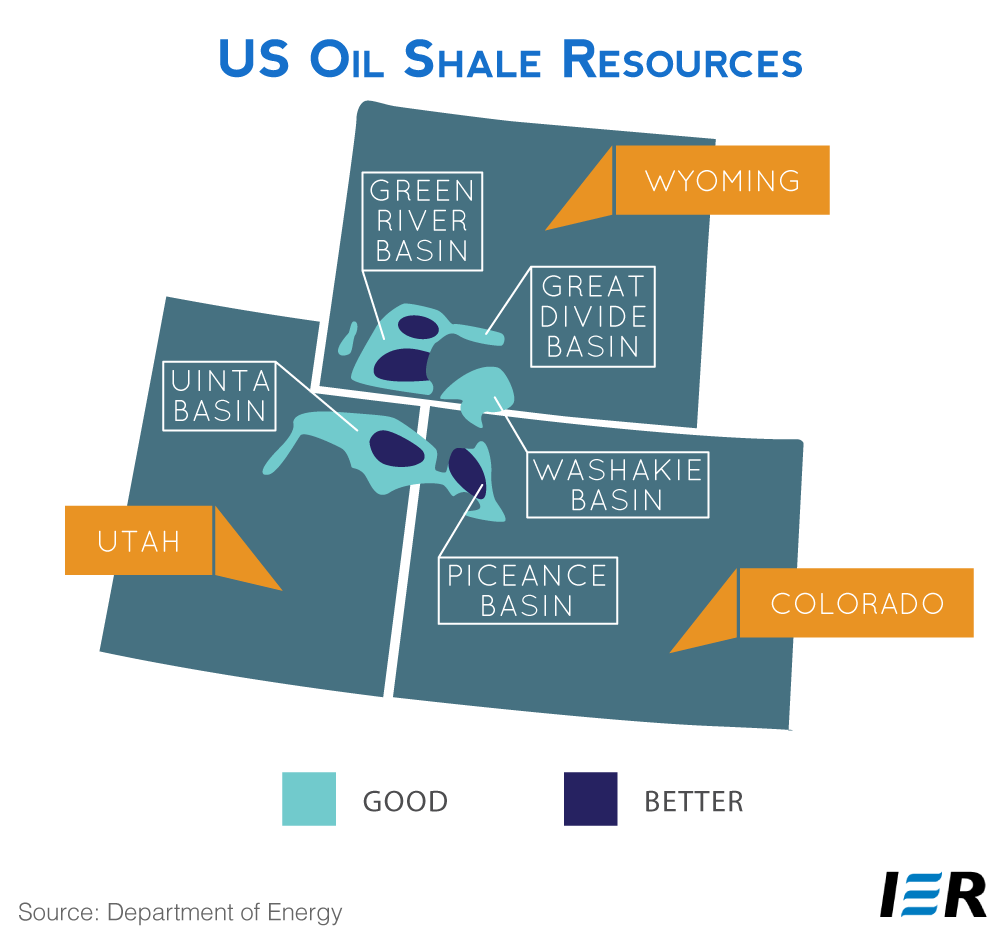 Wyoming serves as a crossroads for pipelines bringing Canadian and Rocky Mountain crude oil to refineries in the Mountain states and the Midwest and for pipelines taking refined products to markets in those regions. The state has six operating oil refineries with a capacity of 166,300 barrels per day that provide one-fourth of the refining capacity in the five-state Rocky Mountain district. Two refineries are located near the crude oil pipeline hub in Casper, and the others are nearer the Utah, Colorado, Nebraska, and South Dakota borders. The refineries produce motor gasoline, diesel fuel, aviation fuel, and other petroleum products. Wyoming’s refineries have added capacity to process Canadian heavy sour crude oils.
The state’s refineries deliver much of their output to other states. Almost three-fifths of the petroleum products consumed in the state are used in the transportation sector and most of the rest are consumed by the industrial sector. Less than 1 percent of homes in the state are heated by fuel oil. Unlike most other states, Wyoming allows the statewide use of conventional motor gasoline. 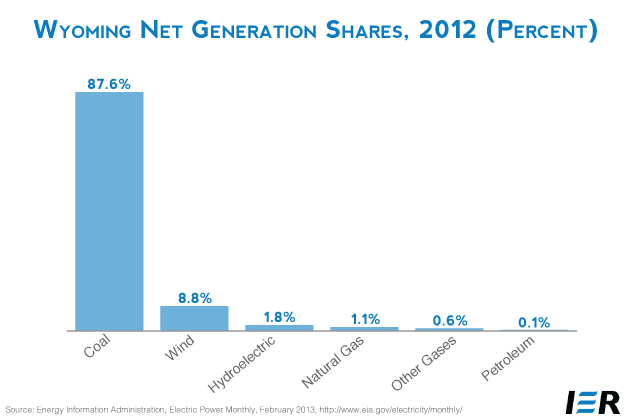 Wyoming has some of the best wind resources in the nation, especially in its southeast quadrant where sustained winds funneled through mountain passes and out across the high prairie provide wind farms with high capacity factors. Wind installations have increased rapidly in recent years, and a number of large-scale projects are under development, including the Chokecherry-Sierra Madre. Currently, Wyoming has the 14th most installed wind capacity at 1.4 gigawatts.

Wyoming’s hydroelectric dams are generally small, older facilities owned by the federal government. The state does not have a renewable portfolio standard or other requirement for renewable energy, but it provides net metering for residential, commercial, and industrial customers with small renewable energy facilities such as solar photovoltaic panels, wind turbines, and hydroelectric generators smaller than 25 kilowatts.

Wyoming electricity production is high, and, although 23 percent of the state’s households use electricity as their primary source for home heating, electricity consumption is low due to the state’s low population.  The industrial sector consumes more than half the electricity used in the state.

Wyoming exports almost two-thirds of the electricity it produces to nearby states. High-voltage transmission lines carrying electricity from Wyoming are saturated, and the state government is encouraging transmission expansion. Six major interstate projects are under way to transmit more power out of Wyoming to western population centers.

Below are some facts about Wyoming’s regulatory environment that are likely to affect the cost of energy or the cost of using energy. Although affordable energy is a vital component of a healthy economy, regulations frequently increase energy costs.

Wyoming does not provide a cap on greenhouse gas emissions. But, Wyoming is an observer of the Western Climate Initiative (WCI), a regional agreement designed to target greenhouse gas reductions. The central component of this agreement was to eventually enact a cap-and-trade scheme to reduce greenhouse gas emissions 15 percent below 2005 levels by 2020. As an observer of the WCI, Wyoming is not bound to agreements made by WCI members. In 2011, all of the states except California left the WCI leaving only them and the Canadian provinces British Columbia, Manitoba, Ontario, and Quebec as full members.

Unlike many other states, Wyoming does not have a Renewable Portfolio Standard that requires a certain amount of generation to be produced by qualifying renewable technologies by specified dates.

Wyoming recommends the energy provisions contained in Appendix Chapter 53 of the Uniform Building Code as minimums that local jurisdictions may, but are not required to, adopt and enforce for all building types. Code provisions may be modified by the local enforcement community without state approval to be more restrictive than the Chapter 53 requirements.

In February 2001, Wyoming enacted legislation that established statewide net metering that applies to investor-owned utilities, electric cooperatives and irrigation districts. Eligible technologies include solar, wind, biomass and hydropower systems up to 25 kilowatts. Systems must be intended primarily to offset part or all of the customer-generator’s requirements for electricity. Net excess generation becomes a kilowatt-hour credit or other compensation on the customer’s following bill.

Wyoming does not require gasoline to be mixed with renewable fuels nor does it impose automobile fuel economy standards, which include attempts to regulate greenhouse gas emission from new vehicles.

Wyoming is the largest state producer of coal in the country.  Coal generates 88 percent of the state’s electricity. As a result, Wyoming has the 4th lowest average retail electricity price in the nation, 27 percent less than the nation’s average electricity price in 2012. Wyoming’s economy and its people are benefitting immensely from the development of its energy resources, and other states are benefitting from the huge supplies of energy Wyoming produces and exports.  The Obama Administration’s policies relating to energy development, particularly coal-fired generation and oil shale development, could significantly negatively affect the state’s future growth.