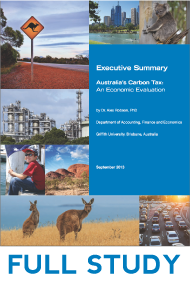 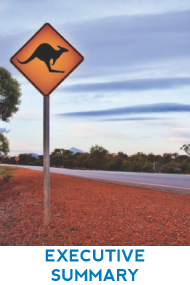 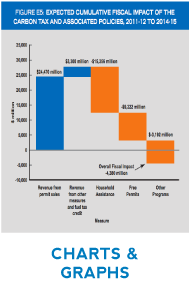 On September 4, 2013 the Institute for Energy Research released a study titled Australia’s Carbon Tax: An Economic Evaluation. The study, conducted by Dr. Alex Robson, Professor of Law and Economics at Griffith University in Brisbane, Australia, assesses the economic impacts of Australia’s carbon tax and draws lessons for policymakers in the United States who may be considering similar taxing schemes. The study is published as Australia prepares to hold a general election on Sept. 7 that many observers view as a referendum on the nation’s now 12-month old carbon tax.

“Poor policy processes tend to lead to poor policy outcomes. Australia’s carbon tax experience provides a number of important lessons in how not to go about implementing sensible climate change policy,” Robson states in the paper.

“Although a number of Government reports examined the possible costs of the carbon tax, none of them assessed the incremental net benefits of the policy. For a variety of reasons, it is unlikely that Australia’s carbon tax will achieve ‘abatement at least cost.’ The most significant complementary climate change policies have remained in place after the introduction of the tax, and a range of new, costly measures were introduced to accompany the policy. These factors have weakened—perhaps fatally—the economic case for Australia’s carbon tax.”

Some U.S. policymakers continue to offer a carbon tax as the way to simultaneously achieve environmental goals for global carbon emissions while reducing other tax burdens faced by small businesses and low- to middle-income families. IER commissioned the study of Australia’s experiment with carbon taxes to examine the real world effects that such policies have on energy markets, prices, and household budgets.

Among the study’s key findings: