Government mandates increase energy prices compared to the energy prices in a free market. That is the upshot of a new Congressional Budget Office’s (CBO) study analyzing the impact of 3 scenarios relating to the Renewable Fuel Standard (RFS).  The RFS is a federal government mandate requiring the use of specified levels of ethanol and advanced biofuels in transportation fuels. The CBO found that unless the RFS is repealed by Congress, the nation’s consumers can expect an increase in gasoline prices of 13 to 26 cents per gallon (4 to 9 percent) and diesel prices of 30 to 51 cents per gallon (9 to 14 percent) in 2017.[i] Those are sizeable price increases that are just a few short years away from occurring, unless the Environmental Protection Agency (EPA) limits the mandates that Congress approved in the Energy Independence and Security Act of 2007 (EISA) or Congress repeals EISA.  These price increases are generally larger than the federal fuel tax of 18.4 cents per gallon for gasoline and 24.4 cents per gallon for diesel, and demonstrate how government mandates act just like taxes.

The Renewable Fuel Standard (RFS) establishes minimum volumes of various types of renewable fuels that must be included in transportation fuels, and which must increase each year through 2022 as specified in the legislation. In the past, the requirements of the RFS have been met almost entirely by blending gasoline with ethanol made from corn. But, once corn-based ethanol hits a production level of 15 billion gallons, the law requires the use of increasingly large amounts of “advanced biofuels,” including diesel made from biomass, ethanol made from sugarcane, and cellulosic biofuels. 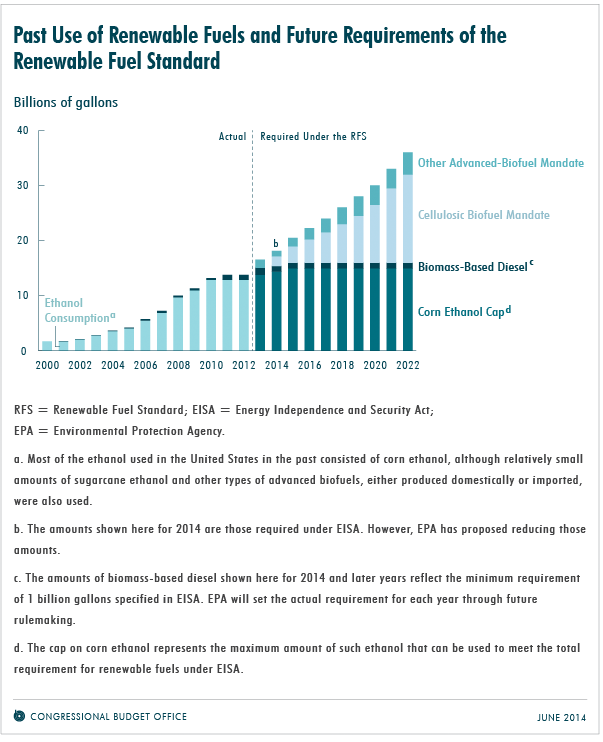 The increasing requirements for advanced biofuels in the law are expected to be hard to meet in the future for a few reasons. First, there is a lack of availability of cellulosic biofuels. Second, there is nowhere for ethanol to go because most vehicles can only use up to E10 without voiding the cars’ warranties and most gasoline is already E10. Third, many small motors have with problems with any ethanol volumes blended with gasoline. 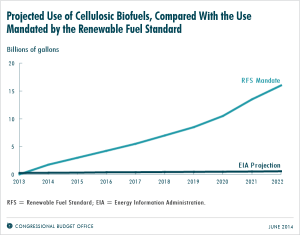 Currently, most gasoline sold in the United States is a blend of 90 percent gasoline and 10 percent ethanol—the maximum amount that is feasible to avoid corrosion to the fuel systems of older vehicles. The increasing requirements for the amount of biofuels required by law results in a much higher level of ethanol in gasoline than the 10 percent blend due to a projected decrease in transportation fuel consumption. CBO estimates that the blend percentage would have to increase to as much as 25 percent by 2022 to use the mandated volumes.

“Flex-fuel” vehicles can run on blends that contain as much as 85 percent ethanol (E85), but fewer than 2 percent of fueling stations in the United States sell high-ethanol blends due to its limited demand. Demand is limited because, adjusted for its energy content, E85 can cost more for motorists.  Few consumers deliberately pay more than they have to for motor fuel. Also, motorists like the convenience of the multitude of gasoline stations in this country.

In recognition of the problems with the 10 percent “blend wall”, EPA has reduced the annual requirements for advanced biofuels in the RFS. For 2014, EPA proposed regulations that would reduce the requirements for advanced biofuels and for total renewable fuel, but these reductions have yet to be finalized despite being half way through the year. The tardiness of EPA’s revisions makes it difficult for refiners to plan and to ensure compliance with the RFS mandates.

Every year since 2009, the EPA has missed its deadline to set the required volumes of ethanol and biodiesel that must be blended into the nation’s transportation fuels under the RFS. The volumes are required by statute to be set by November 30 of the preceding year. Last year, the volumes were set in August, eight months into the year to which the RFS applied. This year, the EPA released a proposed RFS with significant reductions to the prescribed volumes, but has since hinted they might subsequently raise those volumes when the final standard is set. So far, they have not released the final volumes for 2014 although the agency said it would do so in June.[ii]

CBO modeled 3 scenarios to determine the future impact of the RFS. Those scenarios are defined as follows:

In the EISA volumes scenario, CBO notes that fuel suppliers would need to meet the requirements using two types of advanced biofuels: biomass-based diesel (mostly produced in the United States) and sugarcane ethanol (mainly imported from Brazil) requiring large production increases in both. To meet the 2017 requirements would require more than a 100 percent increase in the U.S. production of biomass-based diesel and more than a 45 percent increase in Brazil’s production of sugarcane ethanol.

Thus, under the EISA volumes scenario, fuel suppliers would have to use more than three times as many gallons of advanced biofuels, and they would have to add much more ethanol to gasoline than in a 10 percent blend. Using a range of estimates of the price premiums necessary to encourage additional supplies of advanced biofuels and the price subsidy necessary to motivate sufficient sales of E85, CBO estimates that complying with the EISA volumes scenario would have the following effects on the prices of diesel and gasoline in 2017:

In the EISA volumes scenario, CBO estimates that corn ethanol use in 2017 would be about 15 percent (or 2 billion gallons) higher resulting in an increase in the average price of corn of about 6 percent. The agency expects that would increase total U.S. spending on food by about one-quarter of one percent. Because CBO expects that roughly the same amount of corn ethanol would be consumed in 2017 whether fuel suppliers have to meet EPA’s proposed 2014 requirements or if Congress repeals the RFS (a blend of 10 percent of corn ethanol and 90 percent gasoline would be consumed even in the absence of the RFS), food prices would be about the same under the 2014 volumes scenario and the repeal scenario.

When it comes to emissions, CBO notes that replacing gasoline with corn ethanol has only limited potential for reductions with some studies indicating they could increase emissions. For example, according to the Environmental Working Group, reducing corn ethanol from 14.4 billion gallons to 13.01 billion gallons in 2014, as proposed by EPA, would reduce greenhouse gas emissions by 3 million tons[iv]. CBO notes that reducing the carbon dioxide emissions from transportation fuels with renewable energy will depend primarily on the extent to which advanced biofuels, particularly cellulosic biofuels, can be developed and whether consumers will substitute these renewable fuels for gasoline or diesel over the long run.

Corn prices were relatively stable, between 2.00 and $2.50 a bushel, before the renewable fuel mandates were first established in the Energy Policy Act of 2005. When the Energy Independence and Security Act of 2007 passed, corn prices hit an all time high. They were lower during the “Great Recession” before increasing again, to new highs as the drought of 2012 hit, peaking at $8.25 per bushel, nearly a 400 percent increase above their long-term average. In August, when the EPA declared that it was considering reducing the mandate, corn prices took a 30 percent hit.[v] 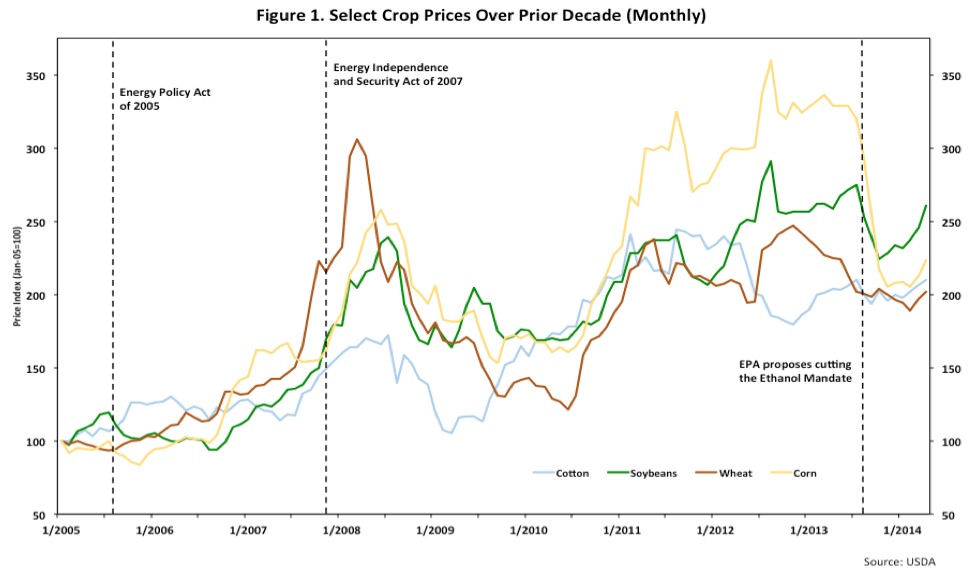 From 2007 through 2013, at least a dozen chicken companies have ceased operations, filed for bankruptcy, or have been acquired by other companies. Since the RFS was enacted, chicken growers have incurred more than $44 billion in higher feed costs. Adding together the higher cumulative feed costs for chicken, turkey, eggs and hogs, it totals almost $100 billion in additional feed costs. To put the $100 billion in perspective, ethanol production has totaled a cumulative 85.4 billion gallons since the RFS was expanded in 2007. Spreading the $100 billion over the 85.4 billion gallons of ethanol results in poultry and livestock producers (and ultimately, consumers) subsidizing ethanol by over $1.00 per gallon. [vii]

Since the implementation of the RFS, wholesale prices for beef have risen 47 percent, dairy by 23 percent, and eggs by 70 percent. According to a study by PricewaterhouseCoopers, these food increases have increased total costs for full-service restaurants by $691 million or nearly 9 percent. Because corn is used in three-fourths of all grocery store items, it is estimated that the average U.S. family of four paid $2,000 more for groceries in 2012.[viii]

While ethanol producers want the RFS laws to remain because of the profits[ix] they have accumulated and stand to make in the future, the CBO has shown that the prices for diesel and gasoline will increase substantially. Moreover, consumers are paying more for food because so much corn is being diverted to meet the mandates. The choices are for Congress to repeal the legislation or for the EPA to continually revise the RFS mandates. Unfortunately, EPA has not met its deadlines for doing so, and refiners are in limbo waiting for EPA to finalize its proposed changes for 2014 halfway through the year when those volumes need to be met.  The system is broken, with missed deadlines and increasing costs.