Besides issues with the blend wall and with renewable identification numbers that we have discussed in the past, the General Accountability Office (GAO) has identified other issues with the Renewable Fuel Standard (RFS) in recent reports. Namely, that the RFS is not meeting expected greenhouse gas reductions because advanced biofuels are not being produced to the levels specified in the Energy Independence and Security Act of 2007. Nor will they meet these production levels in the near future because they are too expensive to produce. For example, in 2017, 24 billion gallons of biofuels were to be produced according to the legislation that created the RFS, but only 19.28 billion gallons are being required by the Environmental Protection Agency (EPA) because the cost of producing advanced biofuels, particularly cellulosic ethanol, is prohibitive. Also hampering production is the boom in domestic oil and gas production that has made fossil fuels far more inexpensive in the marketplace.

Thus, the congressionally mandated levels for biofuels are irrelevant. These levels are specified through 2022. After that date, EPA is to set the levels. Despite EPA lowering the congressionally mandated levels in recent years, it is still setting ethanol and other biofuels blending requirements that are unrealistic and potentially harmful to engines, resulting in increased costs to consumers. According to a study by the Manhattan Institute, biofuel subsidies and mandates cost U.S. motorists $10 billion annually in additional fuel costs.[i]

The RFS was created in 2005 and amended by Congress in 2007, where the stated goals of the program were to reduce oil imports and greenhouse gas emissions. According to the GAO, the RFS has fallen short on both these goals. Since the RFS was established, U.S. oil imports have decreased, and while the RFS did contribute to the decrease, other factors contributed more significantly. These include the increase in domestic oil production due to the advent of hydraulic fracturing and the decrease in the consumption of gasoline.[ii]

The reduction in greenhouse gas emissions were expected to come from the advanced biofuel requirements of the RFS. However, because of their shortfall in production, most of the biofuels blended under the RFS are from conventional corn ethanol, which contributes less to greenhouse gas reductions than advanced biofuels. For example, the cellulosic biofuel blended into the transportation fuel supply in 2015 was less than 5 percent of the statutory target of 3 billion gallons. As a result, EPA has reduced the RFS targets for advanced biofuels in each of the last 4 years. According to GAO, the shortfall of advanced biofuels is the result of high production costs. Further, GAO notes that the current investment climate in research and development required to make these fuels more cost-competitive with petroleum-based fuels is unlikely, even in the longer term. 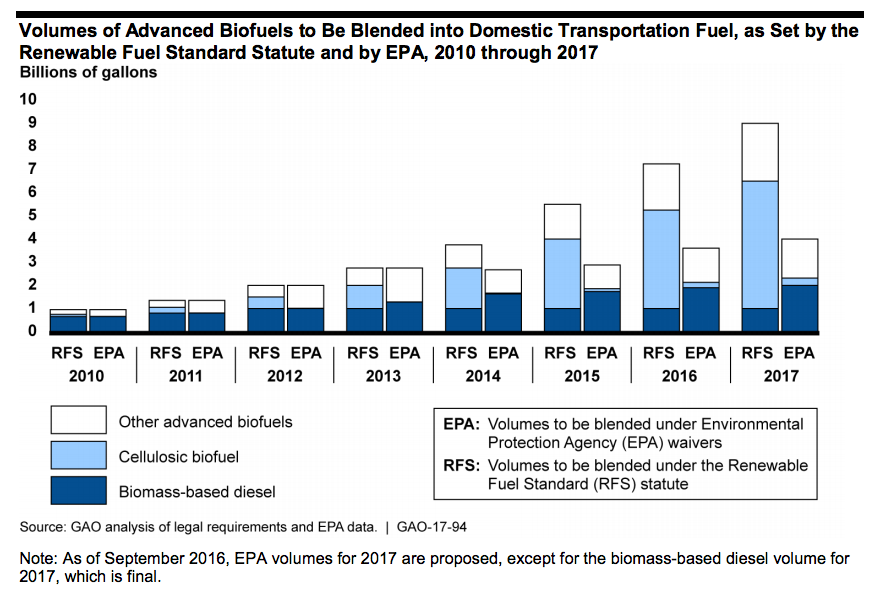 According to the GAO, the federal government supported research and development related to advanced biofuels through direct research or grants. In fiscal years 2013 through 2015, the federal government obligated over $1.1 billion for advanced biofuels research and development. Of that amount, the Department of Agriculture obligated over $168 million that developed a process to increase production of butanol, a drop-in fuel that lowered production costs by over 20 percent. According to the GAO, the federal agencies are shifting their focus to drop-in fuels in part because they are compatible with existing infrastructure, which makes them more desirable than cellulosic ethanol.[iii]

Despite spending on research and development by the federal government, there are several factors that make significant increases to advanced biofuel production challenging. According to GAO, biofuels that are technologically well understood include biodiesel, renewable diesel, renewable natural gas, cellulosic ethanol, and certain drop-in fuels. While biodiesel and renewable diesel are being produced in significant volumes, it is unlikely that their production can expand much in the next few years because of feedstock limitations. Current production of cellulosic biofuels is far below the statutory volumes and there is limited potential for expanded production because production costs are currently too high. While drop-in fuels are technologically well understood, they are not being produced because their production costs are also too high.

Further development in advanced biofuels is expected to be stunted because of the low price of fossil fuels relative to advanced biofuels, which is a disincentive for consumers to adopt greater use of biofuels and a deterrent for private investors to enter the advanced biofuels market. Other uncertainties include government policy, including whether the RFS and federal incentives that support advanced biofuels will remain in effect.

According to the GAO, the two major goals of the legislation that created the RFS was to reduce oil imports and greenhouse gas emissions. While both of these have been reduced, the RFS had less to contribute than other factors. The reduction in oil imports occurred mainly due to greater domestic production of oil and lower consumption of gasoline. The RFS contributed less to greenhouse gas reductions than expected because advanced biofuels production is far below their congressionally mandated levels due to lack of feedstocks and high costs of production. Further, there are serious challenges to increased production of advanced biofuel technologies in the future because of their high costs, the relatively low price of fossil fuels, and uncertainty in the regulatory environment.