The Dakota Access Pipeline is a 1,172 mile pipeline that, once completed, will transport oil from the Bakken oil field in North Dakota to Illinois, crossing 4 states. The pipeline company, Energy Transfer Partners, spent over two years obtaining the required approvals and permits for its construction. This summer, after the pipeline was about half complete, the Standing Rock Sioux protested the pipeline, bringing the issue to court because the tribe claimed there could be possible contamination of drinking water and disruption to culturally important sites that are not on the reservation. The courts ruled against the tribe because there was ample outreach by the U.S. Army Corps of Engineers during the more than two-year permitting process. After the court declined to halt the pipeline, the Obama Administration ignored the rule of law and halted a small part of the project that crosses the Missouri River.

The Dakota Access Pipeline, a $3.8 billion project, would move about half a million barrels of crude oil per day, traverse four states, cross the Missouri and Mississippi rivers, and connect to other pipelines in Illinois. The Army Corps of Engineers estimates the project will create up to 12,000 construction jobs. It will provide millions in state and local revenues during the construction phase and an estimated $129 million annually in property and income taxes: an estimated $50 million annually in property taxes and nearly $74 million in sales taxes to the states of North Dakota, South Dakota, Iowa and Illinois to support services such as schools, roads, and emergency services.[i] 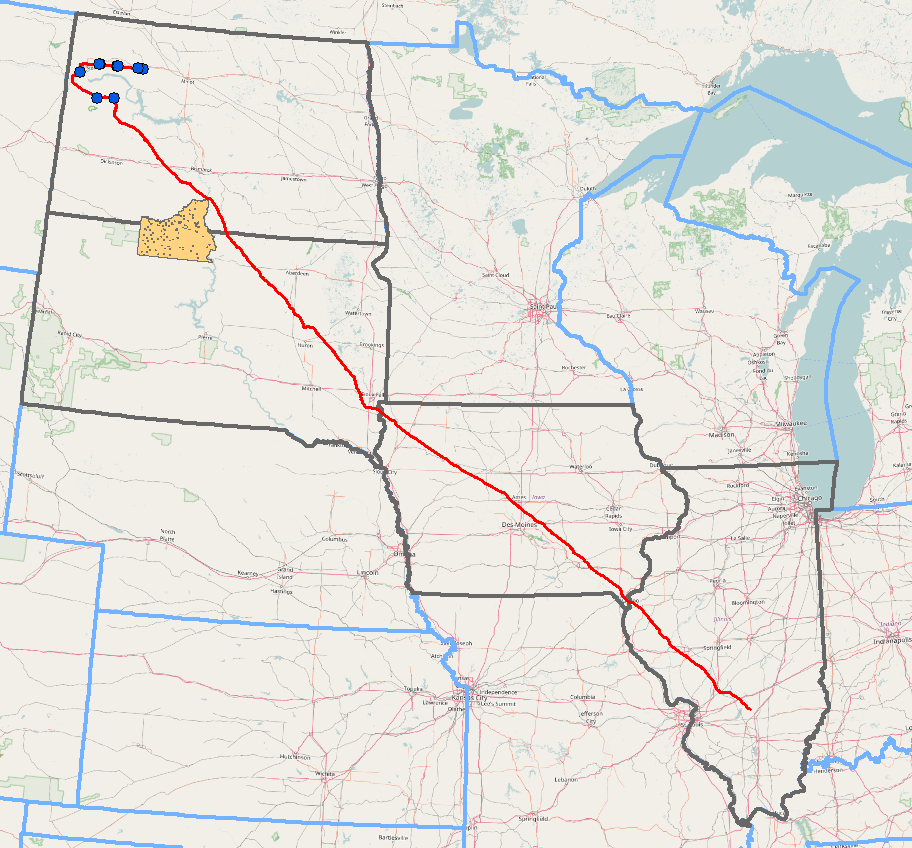 The Interstate Commerce Act of 1887 in accordance with the rules and regulations of the Federal Energy Regulatory Commission (18 CFR Parts 341-349) provides the authority for oil pipeline transportation service by a common carrier. The Pipeline and Hazardous Materials Safety Administration (49 CFR Parts 190-199) provides the regulations to ensure safe movement of the crude oil. The U.S. Army Corps of Engineers grants the permits necessary for crossing jurisdictional waters of the United States and the state public utility agencies provide the permits to construct the pipeline within their states.[ii]

In securing the permits and complying with comments received during the process, the developers of the Dakota pipeline made 141 route changes to avoid disturbance of identified sites on private lands.[iii] Further, the U.S. Army Corps of Engineers reviewed over 1,200 pages of environmental and cultural analysis and consulted with 55 American Indian tribes nearly 400 times before granting the required permit. In fact, the U.S. Army Corps of Engineers stated in an environmental assessment that Energy Transfer Partners “developed response and action plans, and will include several monitoring systems, shut-off valves, and other safety features to minimize the risk of spills and reduce…any potential damages.”[iv]

Despite all that preparatory work, the Standing Rock Sioux tribe sought to block completion of the project through the federal court system, arguing that it had not been properly consulted during the more than two-year permitting process. Two separate federal courts reviewed the tribe’s concerns and both determined that adequate attention was given to the issues by the federal government.[v]

Despite 99.98 percent of the pipeline being on private lands with all the rights-of-way secured, the Obama Administration (Army Corps of Engineers, Interior Department, Justice Department) intervened to halt construction over the portion of the pipeline that would cross the Missouri River. While the pipeline company continued with construction elsewhere and the pipeline is now 77 percent constructed, it will not meet its original completion date of the end of this year.[vi]

The Obama Administration is continuing to use delaying tactics that are costing the company millions. According to the pipeline company, the government-imposed delays on construction have cost it almost $100 million already.[vii] It is estimated that the company would lose $1.4 billion in its first year of delays if it were to continue. Even a temporary or limited injunction would have devastating long and short term impacts on the project.[viii]

The Obama Administration has put future energy infrastructure projects at risk because its action in upending this project sends a signal to companies seeking to invest in U.S. infrastructure that despite spending time and money on an onerous regulatory process, the project may be re-reviewed in midstream and possibly shut down. No company would invest billions of dollars given this kind of uncertainty.

Along with damaging the rule of the law, President Obama has made an already volatile situation worse.

In North Dakota, cars have been burned, explosive projectiles have been launched, shots have been fired, and hundreds of people have been arrested. The majority (92 percent) arrested have been from out of state (from Vermont to Florida to California), according to the National Sheriff’s Association.[ix] Along the pipeline’s route in Iowa, millions of dollars of construction equipment has been destroyed[x] and these destructive protests continue.

Inauguration Day May Change the Outcome

President-Elect Donald Trump has not announced a public position on the pipeline, but it is believed that he would support continuing the project. President-Elect Trump said he would reduce the federal government’s role in energy and environmental policy, while encouraging more infrastructure projects including pipelines to better connect production with markets and consumers.[xi] He has campaigned on removing President Obama’s environmental regulations, naming the Clean Water Act, which gives the federal government jurisdiction over the Dakota Access Pipeline, as one of the regulations at the top of his list.[xii] Further, he is also a proponent of increasing oil and natural gas production on federal lands.

Private companies do not spend large amounts of time and money frivolously.  They identify a need, conceive a solution, and establish a goal for attaining it through careful study and planning.  They commit to years of regulatory hearings, testimony, proceedings, and detailed reports by the company and by federal, state, and local officials.  Only after all those steps have been undertaken and clearances granted do private companies commit to a project and begin construction. In return, they expect the rule of law to be upheld.

President Obama has made the Dakota Access Pipeline unnecessarily politicized. The President’s violation of the rule of law has made things worse and is resulting in escalating costs for the Dakota Access Pipeline. Those costs will make crude oil more expensive to transport, which must be the desire of the Obama Administration. A Trump Administration will surely agree to the pipeline’s completion through recognition of the rule of law and reject the overreach of the Obama Administration’s energy and environmental regulations.

[i] Energy Transfer, The Route, http://www.daplpipelinefacts.com/

GAO Report Reveals the Failures of the Renewable Fuel Standard