Federal policies promoting ethanol are inefficient at any time, but they are particularly harmful to consumers in the midst of a severe drought. The EPA’s schedule of minimum targets for ethanol in the nation’s fuel mix, has caused some 40 percent of the nation’s corn harvest to be used for feeding vehicles, not people. Our analysis here is straightforward economics: Paul Krugman himself publicly called for an end to government ethanol support, over a decade ago, when the pressure on food prices wasn’t nearly as intense and we echo his call today.

A recent report from “Connecting the Dots” (an investment publication distributed by Standard Research) shows the startling impact that federal ethanol mandates and subsidies have had on the agricultural sector. We reproduce (with permission) some of the most striking charts below: 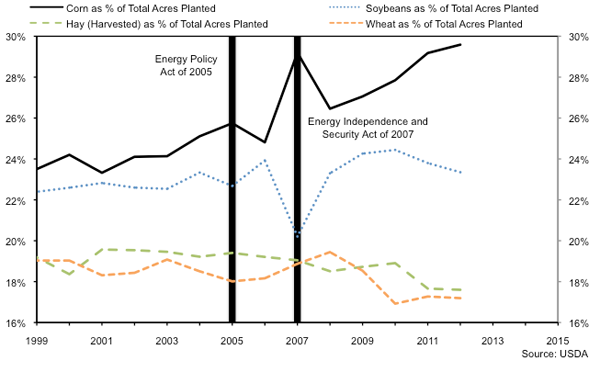 As Figure 2 shows, the ethanol mandates (embedded in the Energy Acts of 2005 and 2007) had a significant impact on the decisions of American farmers. Because corn (destined for ethanol) absorbed a much larger fraction of the total acreage, it “crowded out” the farmland available for other crops. Thus, the ethanol mandate contributes to price spikes in wheat, soybeans, and other crops; this isn’t simply an issue of corn.

The effects don’t stop there. Because the price of corn is higher than it otherwise would be (since the mandate gives an artificial demand for corn-based ethanol), the price of cattle feed is driven higher, too. This puts pressure on cattle ranchers, which in turn causes spikes in the price of beef. A similar process occurs for poultry and swine. In short, the massive federal intervention in the corn market ends up rippling throughout the entire food sector.

To get a sense of the size of the distortions introduced into the agricultural markets, look at the value of Illinois farmland—deep in the Corn Belt—with the introduction of the ethanol mandate: 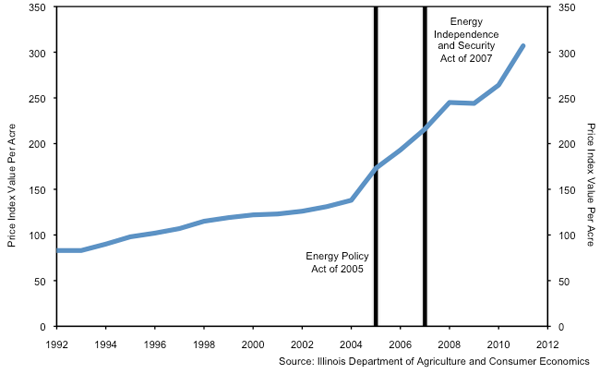 Notice that the general collapse of the real estate market didn’t pop the apparent bubble in Illinois farmland; it merely slowed its inflation. By forcing fuel refiners to use far more of a product (corn-based ethanol) than they otherwise would, the federal government gives artificial support to corn prices which in turn bid up farm values in the Corn Belt. As usual, government interventions in one area of the economy cause a cascade of distortions.

To repeat, our analysis is standard economics, with no partisan bent. Back in June 2000, here’s what Paul Krugman had to say about ethanol policies that were imposed by various units of government:

[T]he C.R.S. [Congressional Research Service] thinks that the other half of the differential [of gas prices in Midwest compared to other areas] is due to local rules in corn-belt cities, which force refiners to meet new federal environmental regulations using ethanol rather than other, technically less demanding gasoline additives.

The use of ethanol — the same stuff that gives beer its buzz — as a fuel is one of those bad ideas that just won’t go away. Back in the late-70’s ethanol produced from corn was promoted as the perfect answer to the energy crisis: it was renewable, it was domestic, and it was supposed to be less polluting.

A couple of decades and quite a few billion dollars in subsidies and tax breaks later…it is clear that the fuel’s virtues were exaggerated. For one thing, modern farming is an energy-intensive business, and still more energy is needed to convert corn into ethanol.…Put it all together and you have a product with no special virtue to recommend it, certainly no virtue that warrants a billion or so dollars a year in tax breaks and subsidies.

[P]erhaps this summer of discontent will have a good effect, by alerting the public to a large, ongoing, bipartisan example of really bad policy. [Bold added.]

For once, we couldn’t agree more. The problems and inefficiencies with government support for ethanol have only intensified since Krugman wrote the above in 2000.