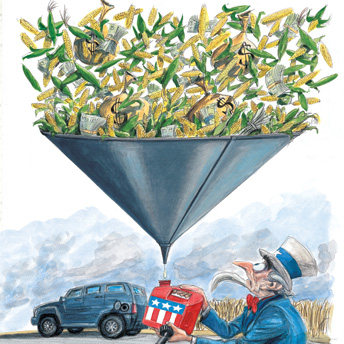 It is seldom that the Institute for Energy Research agrees with the Natural Resources Defense Council, but when it comes to the government promoting ethanol, for once, we are on the same page. Both IER and NRDC oppose the Obama Administration’s moves to allow E15 fuel—a blend of 15 percent ethanol – in gasoline for cars manufactured after 2007.

NRDC opposes the Administration’s decision because they believe it will increase air pollution. Nathaniel Greene explains:

A broad coalition of environmentalists, public health advocates, livestock ranchers, and automakers have long opposed EPA’s move, calling on Congress and the administration to follow the science and conduct more thorough testing of the impacts of higher ethanol blends on air pollution before approving E15 gasoline. These groups have pointed to serious environmental and public health concerns around the tailpipe emissions of vehicles that run on gasoline blended with ethanol. Burning ethanol can cause toxic air pollutants to be emitted from vehicle tailpipes, especially at higher blend levels like E15. The chemistry is fairly straightforward: ethanol burns hotter than gasoline, causing catalytic converters to break down faster. Cars with broken tailpipe controls are disproportionally responsible for air pollution from vehicles.

We agree that air pollution concerns are one reason to oppose this. But, additionally, and equally importantly, there is simply no reason to subsidize and create set-asides for ethanol. Ethanol should compete in the market just like anything else, especially because biofuels like ethanol take food and convert it into fuel.

In the words of Jean Ziegler, the UN special rapporteur on the right to food, biofuels are “a crime against humanity” because they reduce the availability of food. Increased ethanol production has helped increase food prices and has led to great hardships around the world, including food riots.

We hope the Administration reconsiders their politically motivated decision. It should be telling that a free market group like IER and an environmental lobby shop like NRDC could come together over yet another misguided policy from this Administration.