China’s auto sales rose 16.9 percent year-on-year in September, resulting in sales for the first 9 months of 2010 almost totaling sales for the entire 2009 year. This high growth is partly attributed to a government subsidy for fuel efficient cars, but there is also underlying strength in consumer demand.

Fast, steady growth is predicted for future auto sales, according to the State Economic Information Center, a think tank of the Chinese government. To fuel this growth, China needs access to crude oil supplies since it has only 1.5 percent of the world’s reserves.[i] Knowing that crude oil is essential to its economic growth, China is investing in oil reserves throughout the world.

The future of petroleum is now in the world’s most populous country. China ranks second to the United States in petroleum demand.

According to the China Association of Automobile Manufacturers (CAAM), 1.56 million light duty vehicles were sold in September, 20 percent higher than in August.[ii] Beginning in July, the government issued a new subsidy for small, fuel efficient vehicles with engines no larger than 1.6 liters that meet government emissions standards. The credit of 3,000 yuan, or $440, spurred sales of 18 percent year-on-year in August for the 60 models that qualify.[iii]

Sixty eligible models are manufactured by 22 different auto companies, including Chinese automakers. The auto manufacturers selling in China consist of international companies such as Toyota, General Motors, Ford, and Volkswagen; state-owned companies; and private Chinese automakers. The rise in private auto companies has been phenomenal considering they first appeared in the late 1990’s. In 2003, for instance, BYD Company built its first vehicles, and six years later, it sold more passenger vehicles than any other Chinese automaker. Another example is Great Wall Motor Company, who in 2002 built its first vehicle and seven years later, entered the European market with a fleet inventory of two sedans, an SUV and a pickup.[iv] 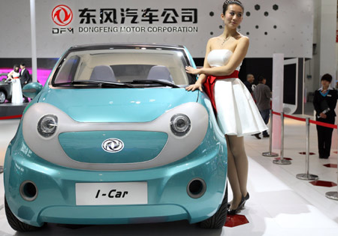 The government also provided a subsidy to buyers in rural areas to encourage mobility and promote wealth outside of the large cities[v], and constructed more than 30,000 miles of expressways in the past decade.[vi] Owning a car in China does not only improve mobility, but it also is a status symbol particularly among the younger generation, who cannot afford to buy a house but can afford to buy a car because of the government-sponsored incentive programs.[vii] Passenger vehicle sales rose 19.3 percent year-on-year in September to 1.21 million vehicles.[viii]

By the end of this year, there will be 25 vehicles for every 1,000 inhabitants in China. Generally, the rate of growth in vehicles remains high until 100 vehicles per 1,000 inhabitants is reached, which is predicted to take China 15 years without subsidies; less with subsidies.[xv]

In contrast, China’s oil production is forecast to remain relatively flat, increasing by just 0.15 million barrels per day, while the United States is expected to increase its domestic supply by 0.9 million barrels per day. Of course, that latter forecast assumes that the Department of Interior will lift its moratorium on offshore drilling and resume permitting for both onshore and offshore leases at a more normal pace. 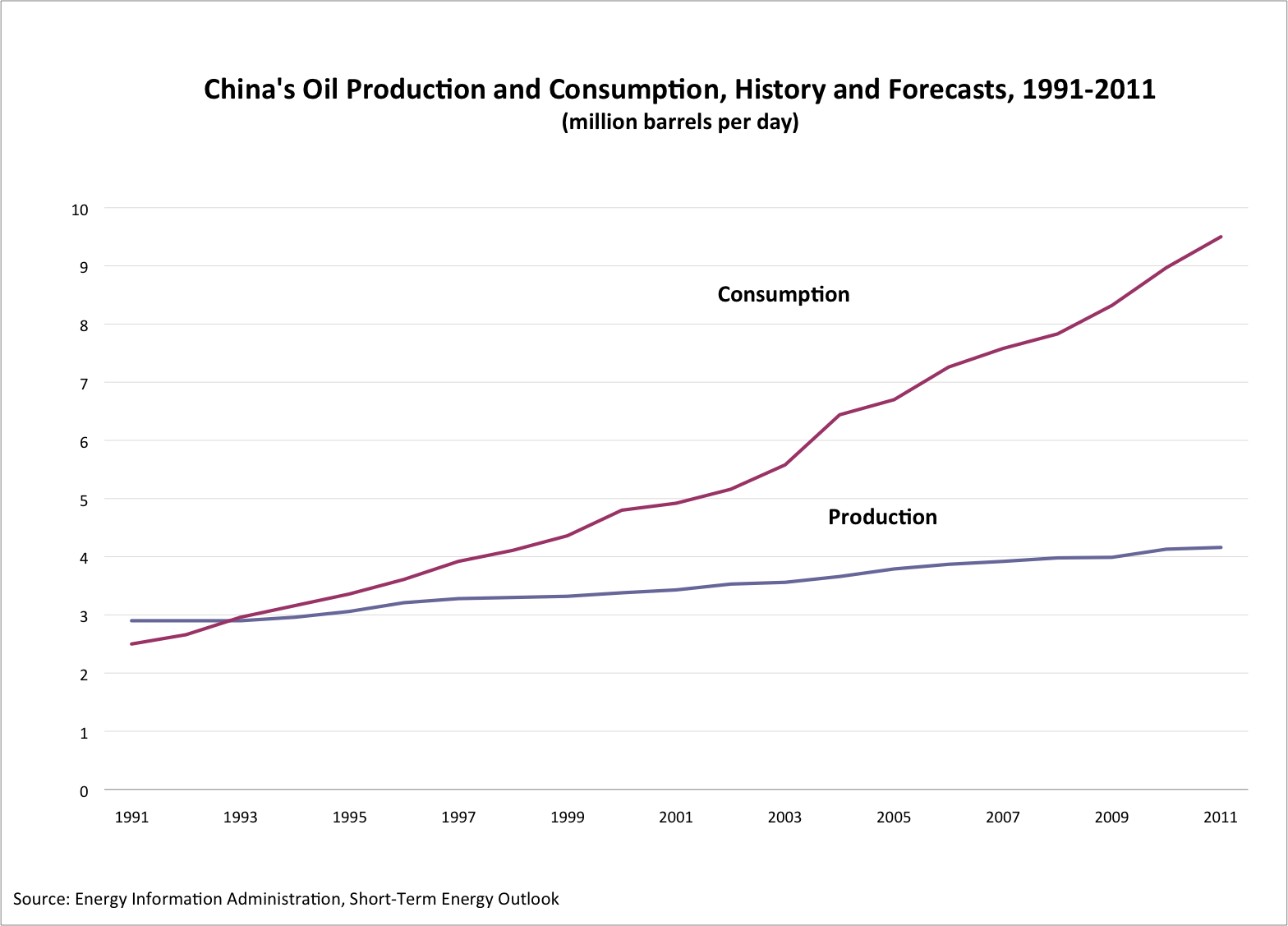 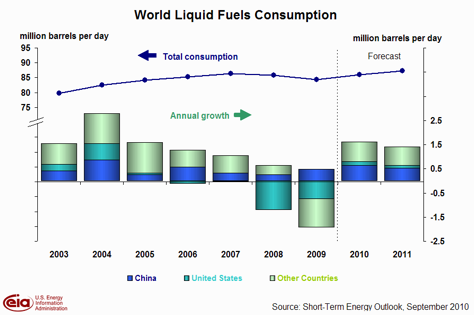 Roughly 85 percent of Chinese oil production capacity is located onshore in eastern China, but most of these oil fields are mature. China’s national oil companies are using natural gas for reinjection purposes to increase the oil recovery rates of its mature fields. The remaining 15 percent of Chinese oil production is offshore, where most of China’s oil production growth is expected. According to the International Energy Agency, current offshore oil production is 680,000 barrels per day, rising to an expected 980,000 barrels per day by 2014, which will offset some of the declines from the more mature onshore fields.

Because of China’s growing future oil demand and its growing reliance on oil imports, its national oil companies are investing in overseas projects. China is taking advantage of the economic downturn and lower asset values overseas to increase its global acquisitions and financing of projects whether for direct investment in energy resources or in loan-for-oil deals where China provides loans for infrastructure development in oil-rich countries in return for future supplies of oil. While several oil-rich countries have been strapped for cash during the credit crunch of 2008 and 2009, China has foreign exchange reserves that it can use to leverage such investments. China has loan-for-oil deals with Russia, Brazil, Venezuela, Kazakhstan, Ecuador and Turkmenistan, among others.[xx]

China agreed to loan companies in Russia and Turkmenistan to construct oil and gas pipelines in exchange for future energy shipments. The loan to Russia is for $25 billion to finance the East Siberia Pacific Ocean oil pipeline in exchange for 300,000 barrels of oil per day. The loan to Turkmenistan is for $3 billion for a natural gas project to feed the Central Asia Gas pipeline. Brazil’s oil company, Petrobas, is receiving $10 billion for oil development in return for 200,000 barrels of oil per day. Venezuela’s loan of $4 billion is to finance infrastructure projects in exchange for its exports to China to increase to one million barrels per day, an almost three-fold increase.[xxi]

More recently, state-owned Sinopec (China Petroleum & Chemical Corporation) invested $7.1 billion in Brazil’s Repsol stock offerings, giving China a 40 percent stake in that business and access to Brazilian offshore sub-salt oil fields.[xxii] China’s national oil companies are also negotiating exploration rights off the coast of Cuba, 40 miles off the coast of Florida, where Cubapetroeo, Cuba’s oil company, estimates that Cuba has up to 20 billion barrels of oil in its offshore areas, although other estimates are less.[xxiii]

When China expands its refinery capacity to include sour and high-sulfur crude types, which it plans on doing, that investment will pave the way for similar deals in other regions of the world with less favorable crude types. This year, China’s Sinopec International Petroleum Exploration and Production Company agreed to buy, for $4.65 billion, the 9 percent interest that ConocoPhillips holds in Syncrude,[xxiv] a Canadian business involved in the production of oil sands (an asphalt-like heavy oil).[xxv]

Most recently, China’s CNOOC is trying to invest in an oil field in southern Texas, paying up to $2.2 billion for a one-third stake in Chesapeake’s Energy’s assets that could result in up to half a million barrels a day of oil equivalent. This is China’s second try at investing in a U.S. oil field, having failed 5 years ago to buy California-based Unocal Corporation. In this current deal, if it proves successful, China will also be gaining technical expertise in drilling in hard-to-get deposits in shale rock.[xxviii]

China’s oil consumption will grow to keep its escalating auto market in fuel and to construct the highways to carry the vehicles. If EIA’s forecast for China’s oil growth of more than one million barrels per day every two years continues, China’s need for oil imports will accelerate due to its low level of oil reserves and fairly constant domestic production of around 4 million barrels per day. Recognizing this, China’s national oil companies and government banks are making deals in oil-rich countries providing infrastructure loans or purchasing shares in those countries’ resources in exchange for future oil supplies.

The Chinese have learned that affordable, accessible energy is needed to keep its economy booming and are planning accordingly. Not unlike elsewhere in the world, oil remains king of the transportation market.

[xxvi] This level of oil consumption for China in 2009 is higher than the EIA estimates graphed earlier in this article.

California's Climate Policy: The Present and Future of AB 32