The ethanol subsidy and import tariff are set to expire at the end of the month, but there are representatives in Congress that want to extend them even though CBO findings indicate that taxpayers pay $1.78 to reduce gasoline consumption by one gallon from ethanol made from corn and $3.00 for cellulosic ethanol made from energy crops such as switch grass, poplars, corn stover, and woodchips. The analogous cost for biodiesel is $2.55, but its subsidy ran out the end of 2009.

Biofuels are added to petroleum products in the transportation sector. In 2009, the United States produced 11.4 billion gallons of biofuels, of which 10.9 billion gallons was ethanol, produced mostly from corn, and 0.5 billion gallons was biodiesel, produced mostly from soybean oil[ii]. A tax credit of 45 cents per gallon of ethanol blended with gasoline is given to blenders of transportation fuels and is set to expire at the end of this month. Biodiesel produced from animal fats and recycled plant oils received a tax credit of one dollar per gallon before it expired in December 2009. Because tax credits for renewables are frequently reinstated, the CBO included the biodiesel tax credit in their analysis. All forms of cellulosic ethanol, made from energy crops that are grown specifically for fuel (switchgrass and poplars), corn stover, and woodchips, receive a tax credit of $1.01 per gallon if blended with gasoline. In fiscal year 2009, the biofuel tax credits reduced federal excise tax collections by about $6 billion.[iii]

The Energy Security and Independence Act passed in 2007 creates Federal renewable fuel mandates that require the production of specified volumes of renewable fuels to be blended with traditional transportation fuels, with targets increasing to 36 billion gallons by 2022.[iv] So far, corn-based ethanol has met its targets, but cellulosic ethanol has not since it is not yet a commercially viable technology. The Environmental Protection Agency recently lowered the mandate for cellulosic ethanol from the legislated target of 250 million gallons in 2011 to 3.94 million gallons, 1.6 percent of the original target.[v]

While some biofuels are imported to meet the mandates, Congress has imposed a tariff of 2.5 percent and 54 cents per gallon to discourage the importation of ethanol.[vi] The tariff is also set to expire at the end of this month.

The CBO calculated the costs to taxpayers of using ethanol to reduce gasoline consumption by one gallon to be $1.78 for ethanol made from corn and $3.00 for cellulosic ethanol. Based on the tax policy in place through last year, the cost of reducing an equivalent amount of diesel fuel using biodiesel is $2.55. 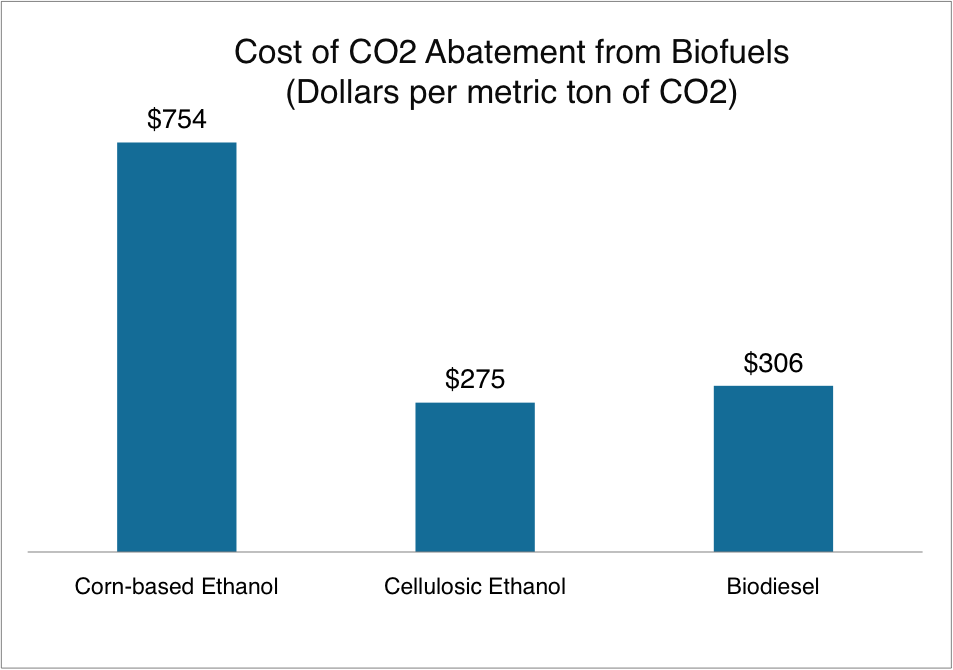 Apparently, some of our Congressmen have not read the CBO study. For example, Senator Tom Harkin from Iowa recently said, “The 45 cents per gallon comes back to consumers in cheaper gasoline prices. Consumers are better off. If we do away with that, gasoline prices are going to go up and they are going to pay for it at the pump, and the oil companies will get the profit, not American farmers, not American producers, not American shippers.”[vii] Senate Finance Committee Chairman Max Baucus has a plan to extend the tax credit for ethanol through 2011, but to reduce it from 45 cents to 36 cents per gallon. He would also extend the 54 cent per gallon tariff on imported ethanol through next year.[viii]

Our politicians when they passed the renewable fuel mandates in 2007 failed to recognize the shortcomings of biofuels, including their lower efficiency resulting in less miles per gallon than traditional transportation fuels, the resultant increase in food prices from diverting corn to the transportation fuel market, and the unlikeliness of cellulosic ethanol to be commercially viable to meet its increasing mandates. We need to recognize that tax subsidies and federal mandates cost the American public both directly and through secondary effects.

What can one pound of uranium do?

The Obama Administration’s War on Offshore