A recent report by NERA Economic Consulting finds dire consequences for American gasoline consumers if EPA does not lower the amount of ethanol required by the Renewable Fuel Standard (RFS) this year.[i] EPA will make its decision by November 30, 2015, despite the requirement in the law that the decision should have been made last fall. According to NERA, in 2015 and beyond, it is not feasible to reach the statute volumes of total renewable fuel required under the Energy Independence and Security Act of 2007 that mandates the RFS. If EPA does not use its discretion and the statutory volumes are upheld, severe economic harm will result.

According to NERA’s study, “forcing” statutory levels of biofuels, which total about 20.5 billion gallons of renewable fuels in 2015, would require 30 percent more renewable identification numbers (RINs)–a tracking system that monitors RFS compliance. But, instead of ramping up production to meet percentage requirements, the study predicts that gasoline and diesel production will be reduced by 30 percent to comply with required blending percentages. That will increase current prices for gasoline and diesel by $90 and $100 per gallon, respectively. The huge price increase results from the fact that there is insufficient time for the market to absorb larger quantities of biofuels. The Congressional Budget Office looked at the impact of mandating the statutory volumes in 2017 when the market can evolve and got much lower gasoline and diesel price increases. (See section below.)

Because transportation services are needed in other sectors of the economy, the fuel cost increase creates spillover effects throughout the economy. For example, higher diesel fuel costs increase the cost to move raw materials and goods throughout the country, making those products more expensive. Similarly, higher gasoline prices results in less disposable income for consumers. As a result, consumption of goods and services declines, which leads to severe economic harm. A consumer would only need to estimate the enormous fuel cost at the pump based on those exorbitant price estimates to realize the magnitude of economic harm that mandating the statutory levels would cause.

NERA used two models—a transportation fuel model and a macroeconomic model–to examine the effects of mandating the statutory levels of total renewable fuel and advanced biofuels in the RFS. The fact that significantly more RINs are required to meet the statutory levels increases the price of motor fuels and decreases their demand substantially. Thus, it is infeasible to reach the statute volumes. NERA found a similar result in an earlier study. But, its prediction of economic harm did not result because EPA recognized that the blend wall (where ethanol is at the 10 percent blending level with gasoline) was being reached and proposed renewable volumes below the statute levels.

According to NERA, “The current level of gasoline demand, the blend wall limiting the share of ethanol that can be blended into the gasoline pool, and the lack of non-ethanol biofuels limit the market potential for total renewable biofuels. Similarly the current market potential for higher ethanol content gasoline like E85 and E15 is too small to have an immediate impact on the amount of ethanol that the gasoline market can absorb.”

The NERA study projects much greater costs than other studies because NERA assumes that the actual volumes required by the RFS must be followed for advanced biofuels and total renewable fuel in 2015, and that EPA does not use its waiver authority to reduce these volumes. This demonstrates, yet again, how fatally flawed the RFS truly is that compliance would be this expensive. Thus, when compliance with the RFS is not feasible due to an insufficient number of RINs, the market is disrupted and economic harm results. To avoid economic harm, EPA must invoke its waiver authority and reduce the statute volumes.

The Congressional Budget Office (CBO) evaluated the motor fuel price impact based on mandating the statutory volumes of the RFS in 2017 (rather than 2015) when the market would be able to absorb more ethanol in both E10 and E85. In 2017, the market would need to absorb 6 billion gallons more ethanol than currently expected in E10 to meet the statutory requirements. To do so, CBO assumed that 2 billion gallons would be corn ethanol and that a 10 cent per gallon price premium would be needed to produce that supply. The remaining 4 billion gallons would be cellulosic ethanol. CBO assumes a subsidy of $1.35 to $1.90 per gallon and a 10 cent per gallon increase to cover retail stations’ capital costs for E85 tanks and pumps. CBO’s RIN prices for corn ethanol would range from $1.55 to $2.10 per gallon. To increase the supply of advanced biofuels by 7 billion gallons in 2017 requires a price premium of $1.50 to $4.00 a gallon according to CBO. RIN prices for advanced biofuels would be $3.00 to $6.00 per gallon.[ii]

CBO found that the price of gasoline in 2017 would increase by 4 to 9 percent ($0.13 to $0.26 per gallon) and the price of diesel would increase by 9 to 14 percent ($0.30 to $0.51 per gallon). The price of E85 would decrease 37 to 51 percent ($0.91 to $1.27 a gallon). These are much lower price increases for gasoline and diesel than in the NERA study, but in this case there is time to obtain the increased supplies and to modify retail stations to sell E85, but price premiums and subsidies would be required. None the less, consumers would still need to pay more for gasoline and diesel because of the addition of a commodity they do not want or need.

EPA has not finalized biofuel levels for 2014 and 2015 despite it now being almost at the end of the third quarter of 2015 and the agency is not expected to finalize them until the end of November. EPA proposed lower levels for renewable transportation fuels in May 2015 due to its belief that the statutory volumes set by legislation are unattainable for 2014, 2015, and 2016 because of lower than expected volumes for gasoline demand, the inability of fuel markets to absorb increasing amounts of ethanol, and limits on the availability of non-ethanol renewable fuels. Because the statutory levels for those years are unachievable, EPA proposed that 2014 requirements would be equal to the levels that were actually produced and consumed and that the 2015 and 2016 requirements be reduced from statutory levels but would be ambitious increases from 2014 levels for advanced biofuels and total renewable fuels.

The table below compares the EPA proposed targets with the statutory requirements. Note that the cellulosic biofuel numbers are significantly lower than the statute levels because the technology has not become commercially available as originally envisioned by Congress. The proposed levels for advanced biofuels and total renewable fuel are also less than the statute levels. One reason that the volumes are ambitious is that the total renewable volumes proposed by EPA exceeds Energy Information Administration (EIA) reference case forecasts by 1 billion ethanol equivalent gallons in 2015 and 2.1 billion ethanol equivalent gallons in 2016.

Ethanol use was believed to reduce greenhouse gas emissions, but research has shown that those emissions are not being reduced much, if at all, because ethanol production requires a significant amount of energy. For example, University of Wisconsin scientists found that clearing grasslands to grow corn and soy could have emitted as much carbon dioxide as 34 coal power plants in one year.[iii] To turn corn into ethanol, corn must be fermented and distilled, which releases greenhouse gases. Researchers from the National Oceanic & Atmospheric Administration and University of Colorado found that the country’s third largest corn ethanol refinery emits 30 times more greenhouse gas emissions than was expected when the RFS was passed.[iv]

Most cars on the road today are only approved by their manufacturers for ethanol blends of 10 percent or less (E10), which is standard across the country. Testing has shown that higher ethanol blends like E15—15 percent ethanol and 85 percent gasoline—could damage engines and fuel systems. For model years 2014 and 2015, half of manufacturers do not recommend using E15 in their vehicles. For model years 2001 through 2011, zero manufacturers recommend using E15. (See chart below.)[v] 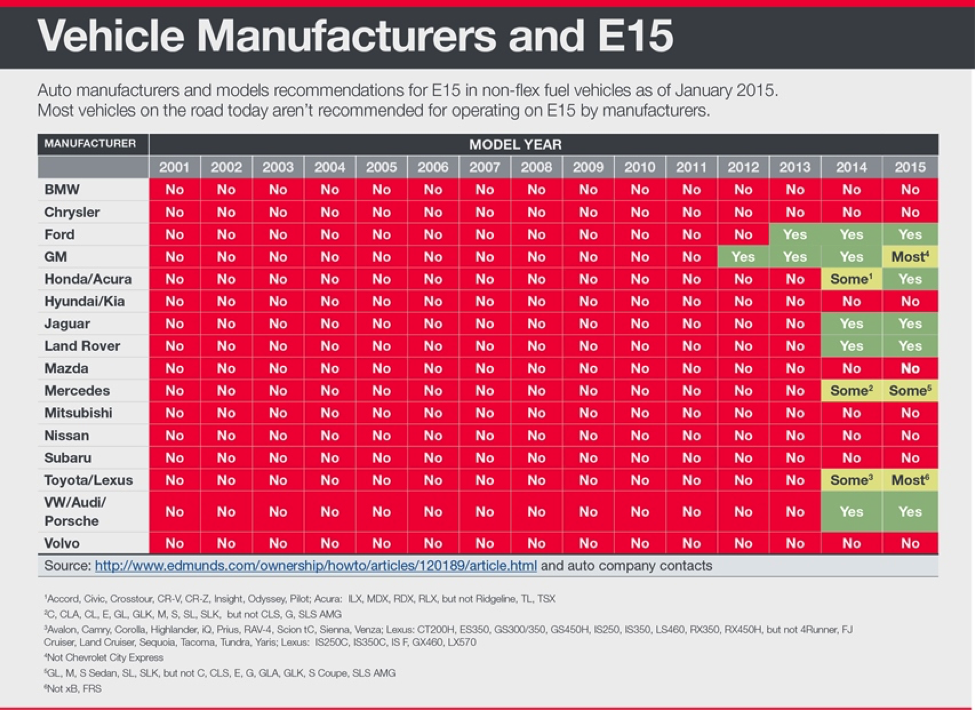 Ethanol also has corrosive properties that are harmful to lawn mowers, motor boats and other gasoline-powered equipment used by homeowners and small businesses. Boat owners have learned quickly to use pure gasoline rather than face exorbitant costs to fix or replace their boat motors.

About 40 percent of our nation’s corn is being used to produce ethanol, raising agricultural commodity prices. According to the National Research Council, estimates of the effect of biofuels on agricultural commodity prices have ranged from 2.5 to 100 percent, with a middle range of estimates falling between 20 to 40 percent.[vii] In 2009, the Congressional Budget Office estimated that taxpayers spent $600 to $900 million more in food and nutrition programs because of high corn prices.[viii] That agency estimates that U.S. food expenditures in 2017 would be $3.5 billion higher if the RFS is left as legislated.[ix]

Ethanol producers have written the White House requesting that the RFS remain as legislated.[x] EPA, however, should do the right thing for consumers and reduce the renewable fuels volumes to levels attainable and waive the cellulosic ethanol requirement for 2014, 2015 and 2016. As NERA’s latest study shows, to do otherwise could be incredibly expensive.

[iv] The Hill, To protect the climate, repeal the biofuel mandate, August 10, 2015, http://thehill.com/blogs/congress-blog/energy-environment/250620-to-protect-the-climate-repeal-the-biofuel-mandate