According to the BP Statistical Review, from 2013 to 2014, world consumption of coal increased by 14.8 million tons of oil equivalent (0.4 percent). Asia and Africa both consumed more coal in 2014 than they did in 2013. The majority of coal (71.5 percent) is consumed in Asia, with China consuming the most—50.6 percent of the world’s coal consumption. While the United States dropped its coal consumption slightly in 2014, it was the world’s second largest consumer of coal, consuming 11.7 percent, followed by India with 9.3 percent. Some European countries (e.g. Belgium, Netherlands, and Spain) had significant increases in coal consumption in 2014 as they substitute coal for high-priced natural gas in Europe.[i]

Many consider China’s oil demand a main determinant of world oil prices since it has been importing more oil to meet demand and to fill its Strategic Petroleum Reserve. But, as the chart below shows, China’s global commodity demand share is much larger for coal than it is for world oil.[iv] Despite the fact that China produces over 4 times the coal that the United States produces, the country must import coal to meet its massive demand. 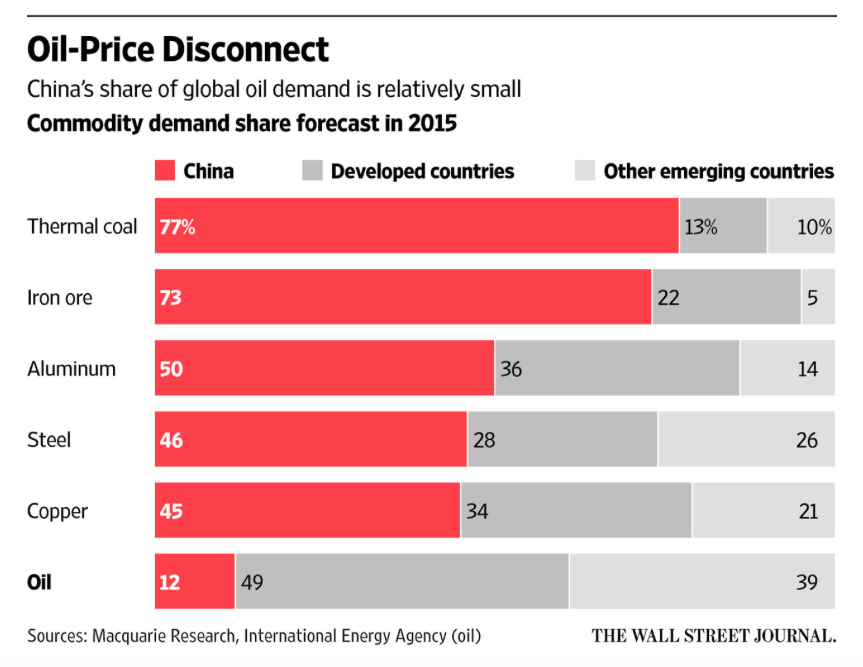 Piyush Goyal, India’s Minister of State for Power, Coal, and New and Renewable Energy, plans to double his nation’s coal production by the year 2019 to meet domestic energy requirements.[v] The reason for this major use of coal is to provide electrification to millions of Indians that are without it. An estimated 400 million Indians–roughly 31 percent of the country’s population–lack access to electricity.  And those that have access regularly experience rolling blackouts, power outages, and curtailments. India is the third largest consumer of electricity in the world, behind the United States and China.[vi] Coal-fired plants in India account for 60 percent of the country’s installed generation capacity.[vii]  The nation also ranks as the third largest in coal production. With a greatly expanding population (India’s population grew by over 200 million between 2004 and 2012), it needs coal to supply the needs of its citizens.

Japan’s electric utilities burned a record amount of coal in August as coal is replacing some of its nuclear generation that was closed due to the accident at Fukushima caused by the tsunami in March 2011. The nation’s 10 power utilities consumed 5.82 million metric tons of coal in August—the largest monthly usage since the data were first compiled in April 1972.[viii]

Japan is now the world’s top public financer of overseas coal plants, technology and mining. It has spent over $20 billion on coal projects between 2007 and 2014—about 25 percent of total international support for coal power. Since 2011, two of Japan’s main public financing arms have backed more than 22 gigawatts of new coal-fired power plants in countries such as Vietnam, India and Chile and have put about $5 billion into coal mining projects globally.[ix]

The Dutch are building a coal-fired power plant that is 46 percent efficient and claimed to be one of the world’s most modern power stations. The 1.6 gigawatt plant was scheduled to be operational in 2014, but was delayed over environmental concerns about its development near nature reserves, including mud flats and islands off the Dutch and German North Sea coast. A Dutch court approved the commissioning of the power plant–an investment of €3 billion ($3.36 billion) at Eemshaven in the Netherlands. Once operational, the thermal power facility is expected to generate enough electricity for two million German and Dutch homes. Both the German and Dutch governments are in support of the project–Germany needs the power to replace nuclear power production that will be curtailed by 2020, and the Netherlands is seeing a decline in natural gas resources. Coal is a cheaper fuel for power generation than natural gas in Europe and can be obtained in large quantities from politically stable countries.[x]

In comparison to these countries, the United States has only one coal-fired power plant under construction–Southern Co.’s Kemper project–a demonstration plant for carbon capture and sequestration technology. In contrast to Japan, President Obama discontinued American support for public financing for new coal-fired power plants overseas in 2013–except where a plant uses carbon capture and sequestration technology or where a developing country has no other choice.

Rather than support coal’s use in this country, President Obama is instituting onerous regulations that will kill the coal industry domestically and cause electricity prices to skyrocket as he proposed in 2008. From the Mercury and Air Toxic Standard to the Clean Power Plan that EPA has promulgated, residential electricity prices are estimated by the Energy Information Administration to increase by 16 percent by 2030.[xi] Coal-fired retirements are projected to be around 90 gigawatts and counting coal-fired plants that have already closed, more than one-third of the nation’s coal-fired capacity will be shuttered and replaced by renewable technologies such as wind and solar. Existing coal-fired power plants are substantially less costly than building these renewable plants, which results in higher prices for the electric consumer.[xii]

Coal is being used to fuel electric generators around the world since it provides reliable and inexpensive power that the world needs to fuel electric demand and grow economies. Japan is selling its highly efficient technology to other countries as a means of secure power with coal supplies coming from stable countries rather than being dependent on natural gas from the Russian Federation or from the Middle East. Developing countries that need to electrify their population—many without any power—are happy to receive backing from Japan to build coal-fired power plants.

President Obama, however, wants to destroy our coal industry and is doing a good job achieving that goal by promulgating regulations that cause coal-fired power plants to shutter. Unfortunately, closing existing coal-fired power plants—one of the least expensive forms of generating power in this country—will just raise electric prices for U.S. consumers and harm our electric grid, impacting global greenhouse gas emissions insignificantly.[xiii]

[ix] Politico, How Japan pushes coal on the world, http://www.politico.com/agenda/story/2015/08/japan-exporting-coal-plants-000195

[xi] Energy Information Administration, Analysis of the Impacts of the Clean Power Plan, May 2015, http://www.eia.gov/analysis/requests/powerplants/cleanplan/pdf/powerplant.pdf and Institute for Energy Research, https://www.instituteforenergyresearch.org/analysis/how-to-kill-the-coal-industry-implement-epas-clean-power-plan/