For years, the Obama Administration has claimed that the stimulus will increase employment through “green jobs”. But what are green jobs? Are they jobs in the solar and wind industry? Yes, but according to a new study, the majority of green jobs in the United States are actually  jobs in waste management (garbage), mass transit, and other non-energy areas, and those jobs are not stimulus-related. Even including those mature jobs, the green or “clean economy” jobs represent just 2 percent of all jobs in the United States, and renewable energy jobs, those touted by the Administration as being “green”, make up just 5 percent of the “clean economy” jobs. That compares modestly to the largest sector of the economy—health care—employing 10.2 percent of all jobs, but unlike health care employment, “clean economy” jobs are growing slower than the U.S. economy.

According to Time magazine[i], a new report has been released by the Brookings Institution and the Battelle Technology Partnership Practice that defines “green jobs” and counts them.[ii] According to the report, the “clean” or “green” economy is a sector of the economy that is low carbon and “that produces goods and services with an environmental benefit.”[iii] And, according to the report, the “clean economy” employs 2.7 million Americans. That number of employees is less than the IT industry in the United States, but more than the biosciences and slightly more than the fossil fuel industry according to the authors. It should be noted that the American Petroleum Institute in a 2009 study indicates that the oil and natural gas industry supported 9.2 million jobs in 2007, 2.1 million of those jobs were direct jobs.[iv]

Most (over 90 percent) of the “clean or green jobs” are in mature industry segments that cover activities including manufacturing and public services such as wastewater and mass transit, and they are clearly not new.  A smaller portion of the “clean economy” encompasses newer segments, including solar photovoltaic (PV), wind, fuel cell, smart grid, biofuel, and battery industries that the Administration is trying to promote. 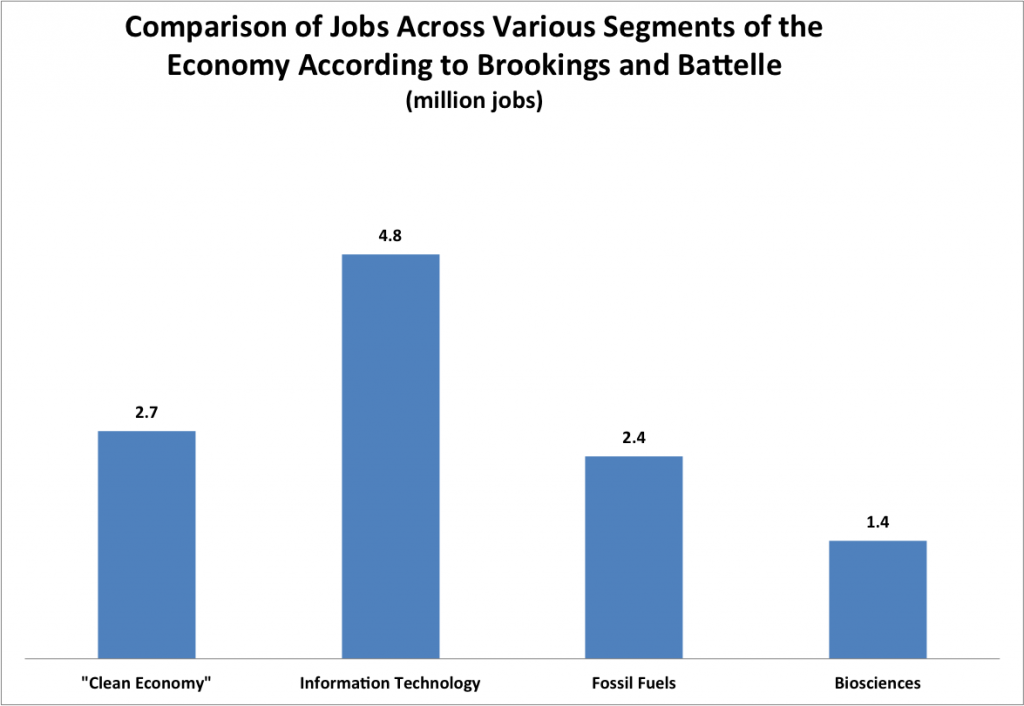 Source: Sizing the Clean Economy by the Brookings Institute

The largest segment of the “clean economy” is in the business of waste management and treatment (386,116 jobs), totaling 14 percent of “clean economy” jobs, with the U.S. Bureau of Reclamation being the largest employer followed by waste management and water operations of the cities of Los Angeles and New York. The second largest component is public mass transit (350,547 jobs), and the third largest component, conservation (314,983 jobs), again largely consists of employees from federal and state and local governments (e.g. U.S. Fish and Wildlife Service, U.S. Forestry Service, National Park Service).  As stated, these are not new jobs.  For example, the first water treatment plant in the United States was built almost 200 years ago.[v]

The authors state that the vast majority of “clean economy” jobs have little to do with energy or energy efficiency. For example, almost one-fifth of “clean economy” jobs involve agriculture and conservation. About forty percent of “clean economy” jobs benefit the environment through greenhouse gas reductions, the management of resources like air and water, and recycling. However, the overwhelming majority of these jobs reduce greenhouse gas emissions as a byproduct of their original goals, such as managing forests, producing food, harnessing water power and the like. The industries that support renewable energy such as solar, wind, biofuels, etc. only provide 5 percent of the jobs. Nuclear energy provides 3 percent of the jobs.

The largest numbers of renewable energy jobs, covering 75 percent of them, are in hydropower (55,467 jobs), wind (24,294 jobs), and PV (24,142 jobs), which together account for just over 100,000 of the 2.7 million jobs identified by the researchers.  Many of these jobs are with private firms including General Electric and First Solar. The smaller segments of the renewable energy category including businesses such as “smart grid,” batteries, fuel cells, and electric vehicles, comprise 55,000 “direct” jobs.

The “green (clean) economy” as defined by the authors also includes jobs in regulation and compliance (e.g. the Environmental Protection Agency), research and engineering (e.g. Oak Ridge National Laboratory), and green architectural services and products. For example, over 77,000 “green economy” jobs are in businesses that make green consumer products or have environmentally sustainable ingredients such as L’Oreal, Maybelline, and Johnson & Johnson. 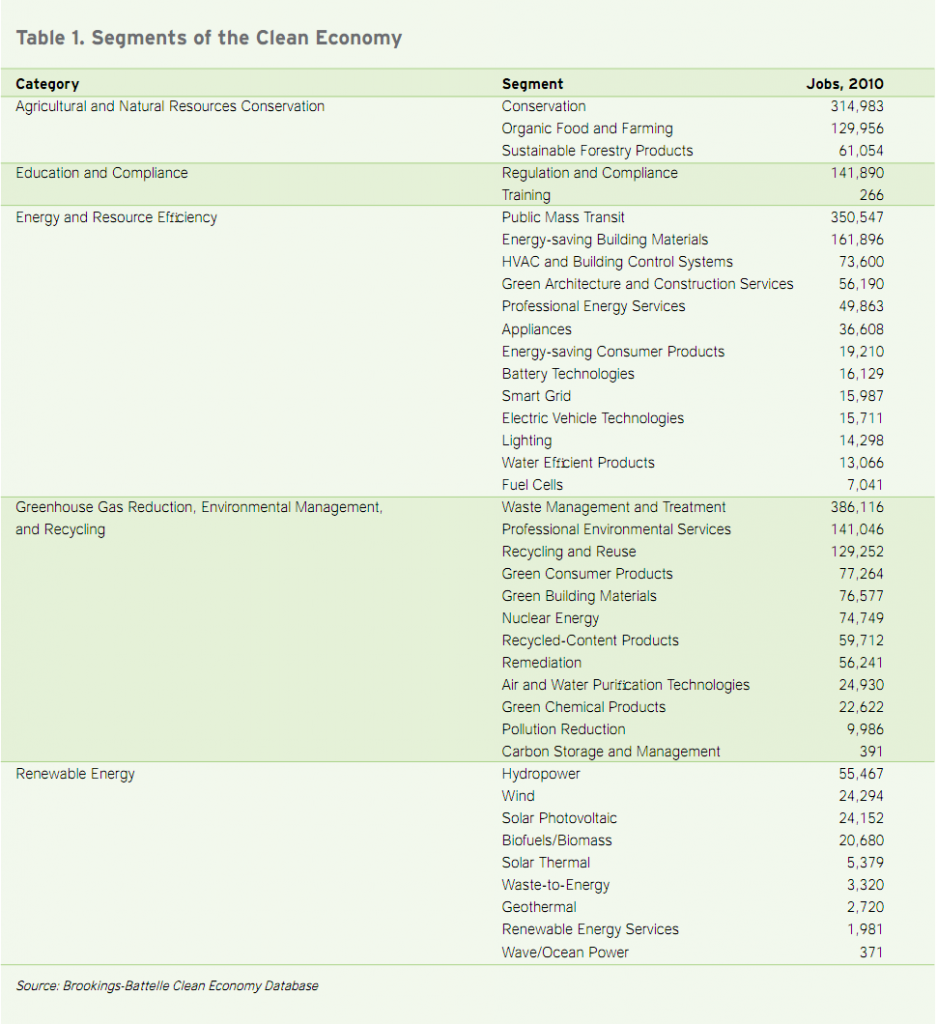 Other findings from the report include:

“Green jobs” in the renewable energy industry supply less than 200,000 U.S. jobs and over a quarter of those jobs are in the hydroelectric industry. But, if we use the definition supplied by Brookings and Battelle that defines the “clean economy” as providing goods and services with an environmental benefit, then the job figure jumps to 2.7 million, which is still a modest 2 percent of U.S. jobs. The majority of the jobs that fit this definition, over 90 percent, are not in the renewable energy field and the largest segments are in waste management (garbage) and the public transportation fields, jobs that have been in existence for decades and even centuries.

The truth is that this is simply one assessment of what constitutes a “green job” and indeed, the definition used in this study—jobs providing goods and services with an environmental benefit—could be used in many ways to make the number of jobs larger or smaller.  For example, few would argue that the automobile, though vilified by some as an environmentally damaging invention, provided an environmental benefit over the tens of millions of beasts of burdens—and their waste—that characterized the only transportation form prior to the adoption of engine-powered vehicles as a replacement.  Likewise, the entire value chain of products that allow fertilizers to be manufactured could be considered beneficial to the environment since fertilizer is used to enhance the growth of plant life, which in turn sequesters carbon dioxide.   And therein lies the continuing difficulty of defining precisely what a “green” or “clean” job constitutes.[vi]

Therefore, it is quite likely that politics will continue to define what is “green” or “clean,” since these are semantic and political devices, rather than scientific or economic characterizations.  One thing is made clear by the new report, however: despite the enormous amounts of money supplied by subsidies and through the stimulus and the mandates provided through federal legislation and state programs and regulation, it does not look like the United States gained many jobs in the “clean or green economy.”  Moreover, as has been demonstrated in studies regarding green energy, it is quite often the case that politically-directed funding for certain energy forms in fact reduces opportunities for jobs elsewhere in the economy through the opportunity costs associated with command-and-control energy policies.   The Brookings/Battelle study did not analyze those opportunity costs.

[vi] Study of the effects on employment of public aid to renewable energy sources, March 2009, http://www.juandemariana.org/pdf/090327-employment-public-aid-renewable.pdf

NAT GAS Act “Benefits” Only Half of the Equation