Our final Ticker of 2018 will span a lot of carbon tax territory. Below you’ll find articles from IER policy director Kenny Stein, IER senior economist Bob Murphy, and yours truly. The cherry on top is a 30-minute segment from Fox Nation that was taped yesterday, in which IER president Tom Pyle takes on carbon tax proponents Ted Halstead of the Climate Leadership Council and Holman Jenkins of the Wall Street Journal.

Once you’ve read each of these articles thoroughly and viewed the video, enjoy a Merry Christmas and a Happy New Year!

Congressman Ted Deutch (D-Fla.) has announced his intention to introduce a new carbon tax proposal in the House of Representatives. The Deutch proposal, officially “The Energy Innovation and Carbon Dividend Act,” would establish a carbon tax of $15 per ton of carbon dioxide equivalent in 2019, set to increase by $10 every year thereafter. The tax would be imposed on any covered entity’s use, or sale or transfer for use, of any covered fuel. Covered fuels include crude oil, natural gas, coal, and derived products. Covered entities include, but are not limited to, refineries, petroleum importers, coal mining operations, coal importers, and companies entering pipeline quality natural gas into the transmission system. Reps. Francis Rooney (R-Fla.), Brian Fitzpatrick (R-Pa.), John Delaney (D-Md.), and Charlie Crist (D-Fla.) are co-sponsors.

The Deutch plan fails to respect the economics literature, which warns of the perils of the lump-sum rebate. With its rapidly-escalating price structure, this lame-duck lob is highly unlikely to make a dent on Capitol Hill. Tax opponents should be wary, however, of this plan serving as an anchor in discussions of climate policy when the 116th Congress convenes next year. And, lastly, though all carbon taxes entail a degree of coercion, Congressman Deutch’s misanthropic, Malthusian two-child dividend limit is an uncommonly concerning intrusion into the private sphere.

As you have likely seen, the Deutch plan now has a companion bill in the Senate. The Senate bill was introduced this week by Sens. Jeff Flake (R-Ariz.) and Chris Coons (D-Del.). The above analysis applies to this more recent bill just as adequately.

Most Americans are probably just hearing about the ongoing protests in France after images of rioting around the Arc de Triomphe in Paris this past weekend finally forced the topic onto the front page. The nationwide protests, now in their third week, had previously garnered little coverage outside France, and what limited mention was made often obscured the source of anger driving the protests with vague references to “rising fuel prices.” Since this weekend, international media has reluctantly gotten closer to identifying the root cause, citing “rising taxes.” But this is not just any old tax protest, it is targeted at a very specific kind of tax: namely, a carbon tax. The protests in France, which despite the focus on Paris have been overwhelmingly peaceful and span the entire country, should be considered another data point in the building backlash to the international green agenda of forcing energy prices higher.

Whether ballot initiatives in Washington state, provincial elections in Canada, or now protests in France, when the people weigh in on carbon taxes there is a common answer: Non!

The recent National Climate Assessment misleads the public, and the media should do a better job digging into the assumptions underlying its pronouncements. In particular, the alarming projections of economic damage rely on the RCP8.5 scenario, which is very pessimistic and in any event rules out the innovations in solar and wind that advocates assure us are just around the corner. Furthermore, even within the RCP8.5 scenario, it is unlikely that the U.S. will suffer extreme damage. The NCA itself doesn’t discuss the cost of mitigation policies, but the previous UN IPCC report did. Looking at the NCA’s own numbers, it’s not at all clear that pursuing aggressive government action to mitigate climate change would produce benefits in excess of costs.

Climate Leadership Council Out of Its Depth
Fox Nation, December 20, 2018:

On Thursday, Tom Pyle was in New York for Fox Nation’s “Deep Dive,” where he joined moderator Paul Gigot along with fellow panelists Ted Halstead and Holman Jenkins. The venue provided the perfect forum to present the findings of our October study, conducted by Capital Alpha Partners, LLC., to an interested and inquiring audience. In fact, one of the primary foci of the Capital Alpha study was the crux of the plan promoted by Halstead’s group, a lump-sum rebate. In the video below, Tom explains why the lump-sum rebate revenue-recycling strategy is perhaps the worst of all the carbon tax approaches. 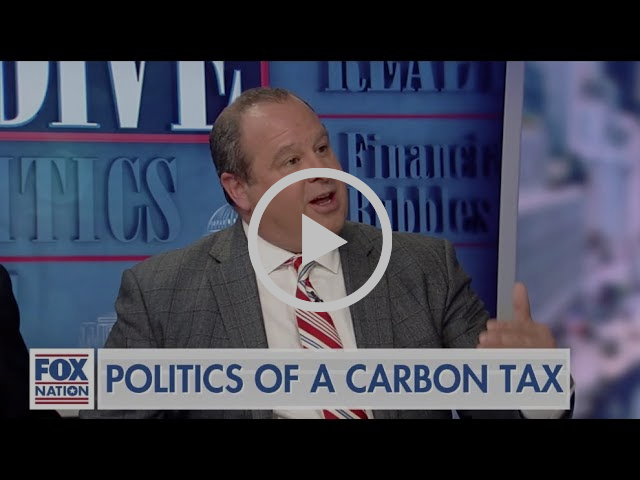