Ecofascism is the use of authoritarian control in order to accomplish the goals of the environmental movement. It is a marrying of the ideas of environmentalism and those of authoritarianism. It tends to view humanity as a blight on the Earth, and to see any decrease in human impacts on their environment as positive, even if the underlying reason for that decrease is something that causes widespread suffering, like a pandemic.

Variations of this world view exist on both the extreme left and the extreme right of politics, showing up in various forms, and often express a Malthusian fear of population growth. These ideas fester wherever it is accepted that serious sacrifice by humanity is necessary to halt and reverse environmental degradation, and that participation in that sacrifice need not be voluntary.

On the right, this is a route by which to express anti-immigration sentiments, that view any population increase as a threat to natural resources and the national environment. This expression of ecofacism is often extremist in nature, and its proponents tend to be willing to take any steps, even violence, to prevent the perceived “invasion”, that they see immigration as. Both the Christchurch, New Zealand and El Paso, Texas shooters  extolled ecofacist ideas in their manifestos.

On the left, it tends to look more like increasing pleas for the government to control, nationalize, and/or ban energy sources and industries that are unfavorable to their zero impact aims. It also means forcing a lower quality of life and energy availability on other people regardless of their preferences.

All forms of ecofascism are united in a prizing of an impactless way of life, over the needs of humanity. The lowest “impact” course of action may also be the cruelest, and what seperates the ecofacist from the environmentalist is the devaluation of human well being in the cost-benefit analysis of what environmental action should be taken.

We see this play out with the current crisis surrounding COVID-19. As the virus sweeps across the world, ever-increasing numbers of people across are forced to “shelter in place,” factories close down, and economic activity slows to a crawl.

While most of the world recoils, the ecofascists rejoice. These sentiments are spreading wildly, for example, one tweet that received more than 300,000 likes described results of lowered human activity and concluded with “This isn’t an apocalypse. It’s an awakening.” From the ecofascist perspective, any reduction in human pollution is good, no matter the cost or reason. This cheery framing of the pandemic rings hollow as tens of thousands are dead, millions are sick, and tens of millions more are experiencing extreme economic hardship.

The ecofascists cheer the lower levels of pollution, initially in China, and now all across the world. They look to the markedly clearer canals in Venice, and the streets in cities the world over without a car in sight. But they don’t all see the reduction in pollution only as a trivial benefit of the crisis. Some see it as evidence that humanity is a blight on the earth, one that should be stopped at any cost. This can seem harmless at first, it often just sounds like hippies personifying the earth, run of the mill flower child talk. But these ideas are insidious.

The idea that humans are disposable creeps in, and when that happens, ecofacist ideas take root. If we don’t point this framing out, this worldview could become mainstream.

Photos and videos of the clearer water in the canals of Venice have been circulating since the early days of the Italian quarantine. Most herald it as an incredible example of the Earth’s power to regenerate in our absence. The language used by some makes it sound like the Coronavirus is some sort of intentional response by the Earth to our activities, calculated to decrease humanity’s collective carbon footprint, and they don’t always seem to be too upset by it.

What’s especially notable about this example is that the clear water is more perception than reality. The office of the Mayor of Venice told CNN that “The water now looks clearer because there is less traffic on the canals, allowing the sediment to stay at the bottom,” this increase in visibility does not necessarily indicate that water pollution levels have decreased.

Tom Schulz, founder of a defunct bitcoin startup and stereotypical San Francisco tech guy, tweeted about the pollution decreases resulting from the virus and said, “Coronavirus is Earth’s vaccine, we’re the virus”. This sentiment is all too common across the zeitgeist right now, with even those who would never think of themselves as ecofascism (or think about ecofascism at all) espousing anti-human points of view.

Promisingly, there has been pushback on the “we are the virus” rhetoric, in the form of a new popular meme format on Twitter and elsewhere. Posts have captions that are variations on “wildlife is finally returning, nature is healing, we are the virus”, but the images attached show anything from photoshopped animals in unlikely places, to landscapes from videogames. Another popular variation is to use a city and its namesake, the most popular of which was this riff on the name of Buffalo, New York: 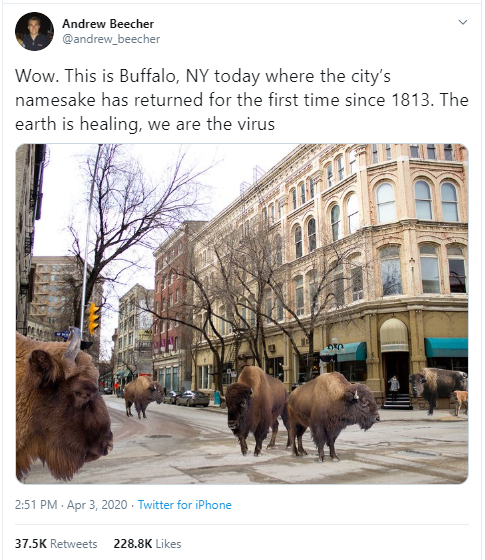 The mockery that this “we are the virus” language has received across social media has been encouraging push back, showing that most people rightly view these ecofacist ideas as anathema.

But a blog post from Thee American Prospect, lauds the potential of the virus to end, or at least dramatically curtail our demand for oil, with the somewhat glib title, “Coronavirus Just Might Help Us Save the Planet”. After all, who would be concerned about tens of thousands of deaths (at present) not to mention the massive despair wrought by economic shutdowns and subsequent job loss, when we might use less oil as a result.

These ideas tend to sneak up on us, we see them first as one off comments that “we are the virus” and the like, but as the environment at all costs sentiments become ingrained in the way some people view the world, and each other, these ideas can and do creep into policy discussions, and even legislation. Because of this, it’s worth nipping these ideas in the bud before they’re ingrained, and calling out points of view that view humanity as expendable, before they take hold.

Plugged In Podcast #49: Kenny Stein to The Railroad Commission of Texas