On April 22nd, thousands of people in cities around the world turned out for the “March for Science.” Although the official motivation was a general support for the scientific method, the subtext was a rebuke of the Trump Administration’s proposed funding cuts and its positions on issues such as climate change. The smugness was on full display, including signs such as this: 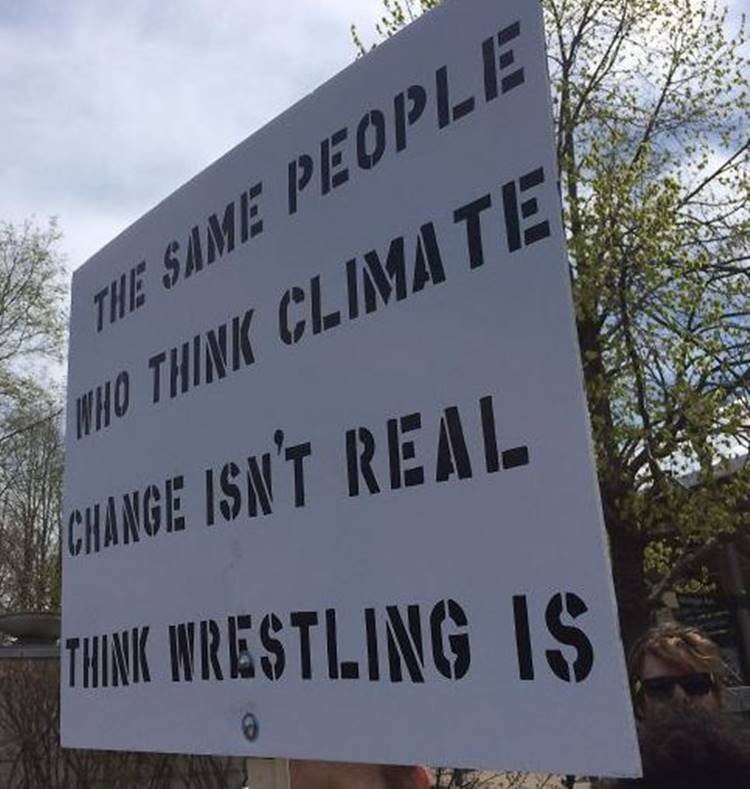 Yet ironically, when it comes to climate change, the vast majority of those marching are ignoring the “consensus” on the economic science.

Specifically, among those calling for government intervention to mitigate climate change, it is usually considered a bare minimum to cap global warming at 2 degrees Celsius (relative to preindustrial temperatures). For example, the Paris Climate Agreement calls upon its signatories to keep total warming “well below” 2°C. Indeed, many environmentalists call for much stricter limits, such as limiting atmospheric concentrations of CO2 to 350ppm and a 1.5°C ceiling.

In that context, let me report some Inconvenient Truths. First, if you consult the latest report from the United Nations Intergovernmental Panel on Climate Change (IPCC), you will not find a justification for the 2°C limit.

In fact, in a 2014 IER post I went through the various sections and built up a step-by-step case in order to conclude the following:

Even using the worst case IPCC concentration pathway, and using the biggest damages from the IPCC’s table of published estimates of the amount of global warming in question, we saw that both in 2050 and 2100, the IPCC’s own estimate of the economic cost of compliance with the policy goal [of limiting warming to 2°C] was greater than the estimate of the climate change damages from “doing nothing.”

Now in response to my argument, some critics replied that the economic models used by the IPCC report were incomplete, and understated the potential risks from climate change. Fair enough, but notice that these true believers are ignoring the “scientific process,” as they themselves define it. The whole point of the IPCC and its periodic reports was to summarize “the consensus” among the various disciplines so that policymakers and the public could see what the scientific community thought, without being misled by lone extremists who were cherry-picked by ideologues.

And yet, when I use the very same IPCC report to show that the popular 2°C goal is unjustified, all of that “consensus” goes out the window and we’re now supposed to rely on piecemeal comments from various people that criticize the peer-reviewed economics literature.

Let me provide another example. For background, William Nordhaus is literally one of the pioneers in the field of the economics of climate change. He is a staunch supporter of a carbon tax. Furthermore, his computer model—called “DICE”—was one of the three representatives of the state-of-the-art in the literature, chosen by the Obama Administration’s Working Group on the Social Cost of Carbon. So there is no way anyone can dismiss William Nordhaus as a right-wing “denier” who is either incompetent and/or corrupt.

And yet, consider the following quotation from Paul Krugman’s 2013 review of Nordhaus’ then-new book on climate change economics:

However it’s done, how ambitious should an emissions reduction program be? There’s an international consensus that we should aim to limit the temperature rise to 2°C; sure enough, Nordhaus goes into full debunking mode here: “The scientific rationale for the 2°C target is not really very scientific.” Instead, he argues for cost-benefit analysis—but this leads him to an only slightly higher target: his best estimate of the optimal climate policy if done right would limit the temperature rise to 2.3°C.

The qualifier “if done right” is important. Stabilizing temperature rise in the 2–3 degree range already requires very large reductions in CO2 emissions, albeit reductions that Nordhaus (and just about all serious energy economists) believe can be achieved at only moderate cost, given sufficient lead time. But what if some major nations refuse to participate in the effort? What if domestic policy is poorly designed, so that the costs of emission reductions are higher than they should be? In such cases, Nordhaus concludes, the target temperature should be considerably higher, possibly close to 4°C. [Paul Krugman, bold added.]

To be sure, Krugman goes on to say that he disagrees with Nordhaus on this matter. But Paul Krugman is not a pioneer in the field, and he hasn’t spent decades developing a peer-reviewed model that was one of three selected by the Obama Working Group to estimate the harm of carbon dioxide emissions. William Nordhaus was, and William Nordhaus is saying that the popular 2°C target “is not really very scientific.”

I sure hope those who marched for science will take seriously the input from one of the most respected authorities on the planet. To make the case that governments should intervene to limit greenhouse gas emissions, it’s not enough to list a bunch of potentially bad things that could happen from “business as usual.” There are serious scholars in the field of economic science who are using the state-of-the-art modeling to argue that popular climate goals will hurt humanity more than they will help. When so many environmental activists glibly dismiss these warnings, it leads me to suspect that the “refusal to follow the science” is more widespread than these marchers realize.