It is time for the federal government to stop wasting taxpayer dollars on subsidies for wind power. In its Annual Energy Outlook 2017, the Energy Information Administration (EIA) compares the levelized costs for units coming online in 2022 and found that the levelized cost of wind turbines is competitive with the levelized cost of new natural gas combined cycle units even without wind power’s most significant subsidy—the Production Tax Credit (PTC).[i] And, with the production tax credit, wind turbines are 18 percent less than a new natural gas combined cycle unit, according to EIA. With levelized costs competitive with its closest competitor, natural gas, there is no reason to continue to subsidize wind power.

Further, wind turbines pose others problems. Due to the uncertainty and intermittency of wind resources, reliable electricity sources must be available so grid operators can quickly power the grid up or down. This creates additional costs to the system and results in greater emissions than if more reliable electricity sources were to run at their normal rate. And, the best wind resources are usually located in remote locations, causing the need for extra transmission infrastructure and power loss inefficiencies. Further, a British study has found that the life of wind units is on the order of 12 to 15 years, rather than the assumed life of 20 to 25 years.[ii]

To get the equivalent amount of wind energy compared to traditional energy sources would require massive amounts of land. For example, for the equivalent amount of energy, wind would require about 700 times more land than a hydraulic fracturing site.[iii] For these additional reasons, the U.S. government should not continue to use the U.S. Treasury to subsidize wind.

The production tax credit (PTC) for wind has expired and been extended 10 times. It is now set to expire at the end of 2019. This year, the subsidy is 20 percent less than its level last year of 2.3 cents per kilowatt-hour. In 2018, it will be 40 percent less, and in 2019, 60 percent less.[iv] Wind turbines get the PTC for the first ten years of their operation. It is so lucrative that wind operators can, and sometimes do, accept a negative price during periods of low demand in order to wipe out the competition. According to a Congressional Research Service study, the PTC is the largest 2016 to 2020 energy-related tax expenditure cost to the Treasury at $25.7 billion.[v] 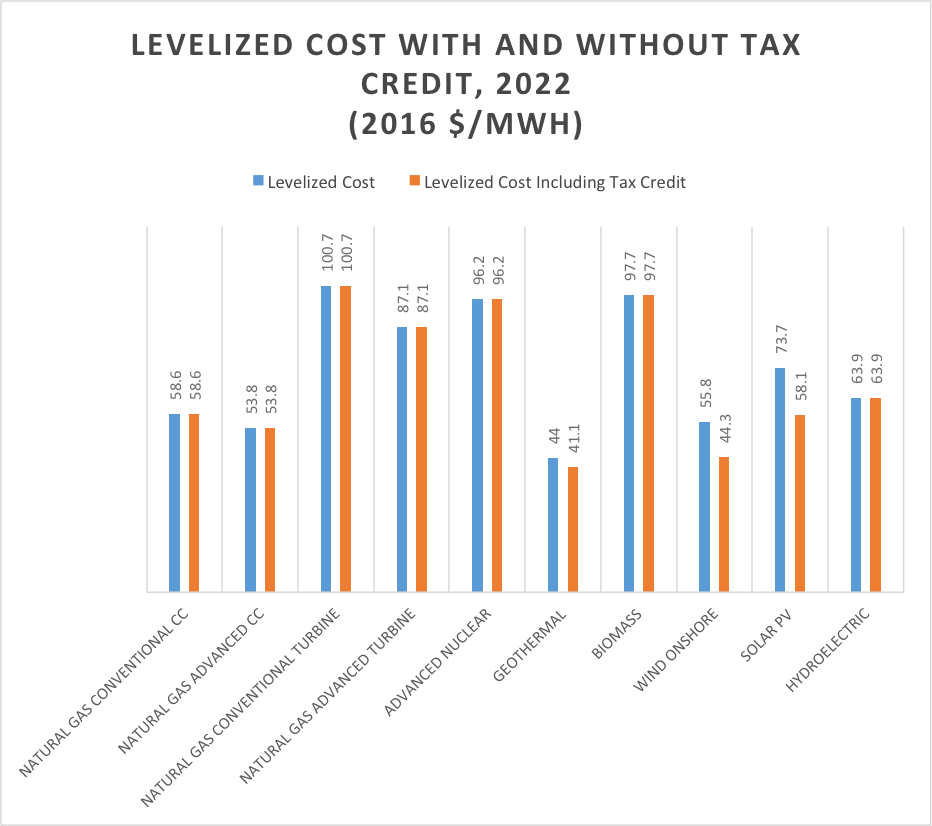 According to an Institute for Energy (IER) research study entitled the Levelized Cost of Electricity from Existing Generation Resources, the levelized cost of wind, even including the PTC, in AEO 2017 is higher than the levelized cost of existing dispatchable generating technologies.[vi] In that same IER study, in an attempt to deal with intermittent issues with wind power, the authors found that based on the Annual Energy Outlook 2015 cost assumptions for generating technologies and 2015 values for capacity factor and fuel cost, the levelized cost of natural gas combined cycle unit, the least cost dispatchable technology, backing-up wind power would be $27 per megawatt hour (in 2016 dollars).

It depends on who you ask. Many of those living near a proposed wind site in rural America are not enamored with them. The push for large-scale renewables is creating land-use conflicts in rural regions from Maryland to California. Rural residents are objecting to wind projects to protect their property values and their views. Since 2015, over 120 government entities in about two dozen states have moved to reject or restrict the subsidized sprawl of wind power.

In Maryland, an eight-year battle may have ended when a judge ruled in favor of local homeowners and Allegany County against the developer of a 60-megawatt wind project. In California, which has a mandate that 50 percent of the electricity sold in the state be produced from renewable energy by 2030, the Los Angeles County Board of Supervisors voted unanimously to ban wind turbines in L.A.’s  unincorporated areas. In New York, which also has a 50 percent renewable mandate by 2030, commercial fishermen are suing to stop an offshore wind project on the Eastern Seaboard and three upstate counties—Erie, Orleans and Niagara—and the towns of Yates and Somerset, are fighting a proposed 200-megawatt wind project on the shores of Lake Ontario.

Even environmentalists are against some wind projects. Despite federal officials approving a 200-megawatt wind farm in Nevada, environmentalists killed the project because it could harm golden eagles and desert tortoises. The Searchlight wind farm would have included 87 wind turbines, stretching across 9,300 acres on public land sixty miles south of Las Vegas, near the California border. Conservationists sued the federal Bureau of Land Management and the U.S. Fish and Wildlife Service, arguing the agencies had not adequately analyzed the impacts to federally protected species. In 2015, a federal judge invalidated Searchlight’s environmental review and threw out its government permit–a first for a renewable energy facility. An appeals court upheld that ruling in October.[vii]

To increase wind-energy production to the levels needed to displace significant quantities of coal, oil and natural gas will require erecting more and taller turbines, reaching 700 feet. But the more wind turbines that get installed, and the taller they are, the more nearby residents are likely to object.

Renewable energy development has also divided environmentalists in the Southwest, with critics saying they hurt desert ecosystems. Conservationists are putting a greater emphasis on rooftop solar, encouraging government officials to allow large-scale solar and wind farms only on lands that have already been disturbed by development.

In reviewing the tax code, the President and Congress should take a look at federal tax credits that are no longer needed for renewable development, which would save U.S. Treasury funds for President Trump’s priorities. Clearly, EIA’s forecasts show that wind energy is cost-competitive with natural gas generating technologies without the PTC and ignoring the cost of its reliability issues, which is the comparison made by wind advocates. Further, rural Americans do not want wind turbines in their back yards and conservationists see wind farms as unnecessarily hurting ecosystems.

White House Puts Offshore Resources Back in the Game