In an attempt to garner support for the Environmental Protection Agency’s controversial regulation of carbon dioxide emissions from power plants, President Obama and EPA officials have taken to linking climate change to an issue that hits most Americans close to home: asthma. The problem is that carbon dioxide—which the rule regulates – does not cause asthma.

According to the EPA, one in ten American children suffers from asthma. President Obama’s own daughter, Malia, is among those who have experienced the disease. In a recent interview, the president cited his daughter’s asthma to call on Americans to support the EPA’s regulation, which forces states reduce carbon dioxide emissions from power plants by 30 percent by 2030. EPA claims its rule will improve America’s health by reducing criteria pollutants that contribute to asthma prevalence. Instead, the data show that while pollution has been dropping for decades, asthma rates are rising. This casts doubt on the health benefits of the EPA’s rule and suggests that other factors, such as poverty, may play a larger role in asthma development than air pollution.

The EPA is relying on dubious asthma claims because its climate rule has no discernible impact on climate change. Using the EPA’s own models, the climate rule reduces global warming by just 0.02 degrees Celsius and slows sea-level rise by just 0.01 of an inch by the year 2100—equivalent to the thickness of three sheets of paper. It leaves Americans to wonder why the EPA is pursuing a climate rule that does nothing to address climate change while inflicting severe financial burdens on the poor—taking money out of their pockets and making it harder for families to pay for food, housing, and medicine. As a result, the EPA should withdraw its rule.

The EPA claims its plan will lead to climate and health benefits worth $55 billion to $93 billion in 2030, including the prevention of up to 6,600 premature deaths and 150,000 asthma attacks in children. Currently, about 25 million Americans suffer from asthma, and the EPA is claiming that its rule, by reducing these Americans’ exposure to outdoor air pollutants (including sulfur dioxide and particulate matter), can help to alleviate this health burden.

Note: these air pollution reductions are known as co-benefits since they are incidental to the point of the rule, which is to reduce greenhouse gas emissions. Since the EPA admits its climate rule has no effect on climate change, the agency must rely on these incidental benefits to justify its regulation.

Asthma is a serious problem in the United States. Incidences of asthma have increased by over 130% since 1980, resulting in over 3,300 deaths in 2009 alone. The administration is misleading, however, in trying to link the disease to climate change policy. Government data taken from the EPA and the Center for Disease Control (CDC) cast doubt on the claim that reducing air pollution necessarily reduces asthma. According to the EPA data, the six “criteria pollutants” that the agency regulates have declined by 62% since 1980. Meanwhile, the prevalence of asthma has increased steadily.

The five charts below depict the data that question the EPA’s link between emission reductions and asthma. The data were taken from the EPA’s National Emissions Inventory the CDC’s National Surveillance for Asthma and National Health Interview Survey. The charts show that while criteria pollutants sulfur dioxide, nitrogen dioxide, ozone, and particulate matter have decreased over the past several years, child asthma rates have continued to climb, by as much as 131% since 1980. These conflicting data raise questions about the health benefits of mandating further emission reductions. 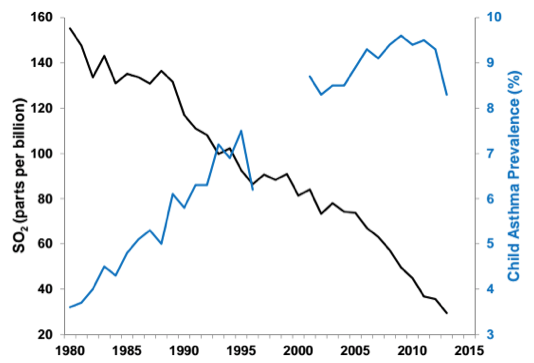 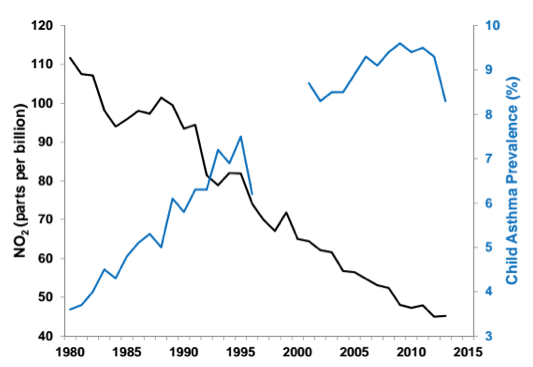 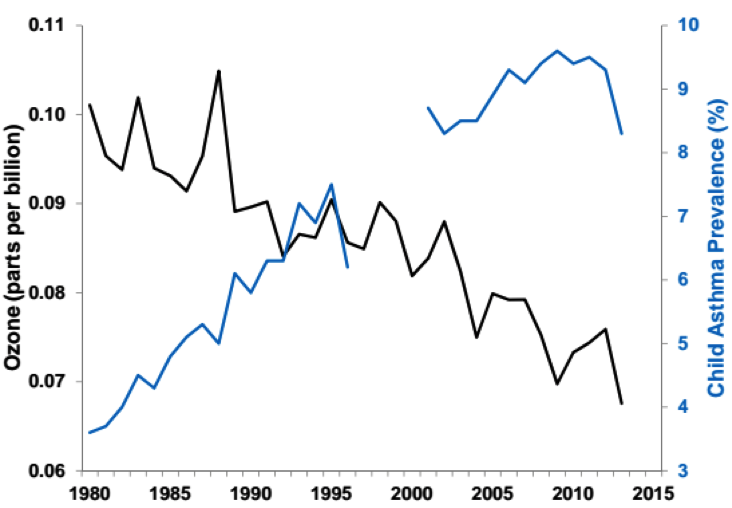 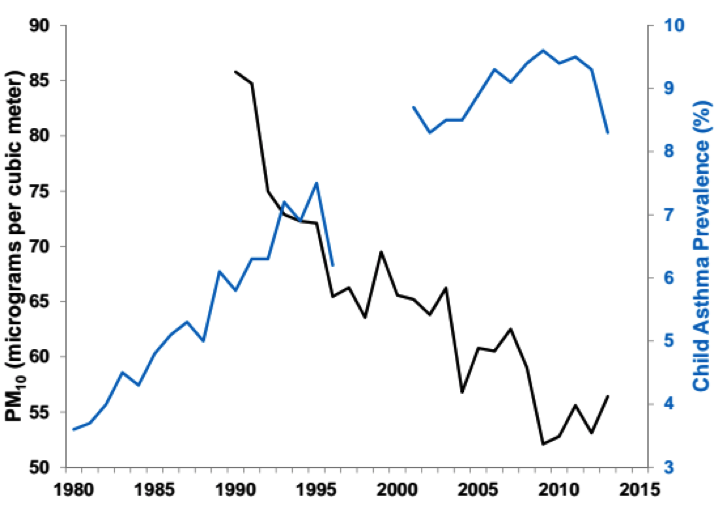 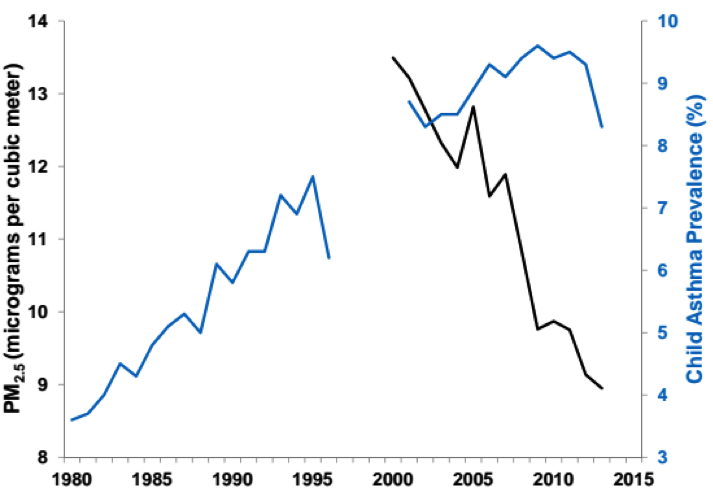 Note: the discontinuity in the asthma trend line results from a survey redesign that took place in 1997. Prior to the redesign, the CDC collected data on asthma period prevalence, which reflects the percentage of the U.S. population having asthma in the previous 12 months. In 2001, the CDC began collecting data on current asthma prevalence, representing the percentage of the population having asthma at the time of the survey.

If the EPA is correct that reducing pollution reduces asthma, then why are asthma rates rising as pollution is falling? The EPA seems uninterested in answering this question, though it is central to their claim that the Clean Power Plan will improve public health.

Since the EPA’s rule has no impact on climate change, the federal government relies on health claims like asthma alleviation to justify its climate rule. However, the EPA ignores the link between wealth and health. To put it another way, by making people poorer, the EPA’s regulation may make people sicker.

The EPA’s rule will raise energy prices by forcing the closure of affordable coal-fired plants to make way for more expensive plants fueled by other sources. This could raise electricity prices by double digits for residents of 43 states, a burden that will be felt most by America’s poor. The poor generally spend a higher percentage of their incomes on electricity and, as a recent Johns Hopkins study shows, poverty makes children more likely to develop asthma. By raising energy prices, the climate rule will destroy jobs, increase poverty, hinder lower-income families’ efforts to escape poverty, and perhaps make them more vulnerable to asthma.

In addition, these poor households will have to sacrifice other necessities in order to afford the higher energy prices. Among these will be visits to the doctor for those currently suffering from asthma. According to the CDC, 8.9 million asthma-related doctor visits are made each year. Poorer American families that are both more prone to asthma and more likely to be hurt economically by the rule will have less money to spend on asthma treatment and other health expenses. About 9.2 million families have annual pretax incomes of less than $10,000. For those millions of families, 32 percent went without food for at least one day; 42 percent went without medical or dental care; and 38 percent did not fill a prescription or took less than the full dose, according to a report from the National Energy Assistance Directors’ Association. The EPA should not force families to make tradeoffs between paying their utility bill and medical care, especially when it comes to treating their child’s asthma.

To make matters worse, the EPA ignores its own analysis on the relationship between income and health. In the past, EPA has admitted a positive correlation between “people’s wealth and health status, as measures by mortality, morbidity, and other metrics.” Yet the agency made no effort to quantify the wealth-health correlation in its rule, likely because it would not benefit the EPA. In order to calculate its estimates of mortality benefits, EPA uses the value of statistical life (VSL) approach, which assesses that every income loss of $10.1 million ($US 2011) leads to one premature death. Using the VSL approach and a study from NERA Economic Consulting, which estimated there would be total compliance costs of $366 billion from EPA’s rule, IER estimates that EPA’s regulation could cause nearly 35,000 premature deaths by the year 2030.[i] By contrast, EPA estimated that the final rule would result in 200 avoided premature deaths annually in 2020, 1,900 deaths avoided in 2025, and 3,600 in 2030.[ii] Assuming a linear trend, IER estimates that EPA’s carbon rule could prevent about 21,000 total premature deaths through the year 2030. Yet after factoring in the health-wealth connection, as shown below, EPA’s carbon dioxide regulation on power plants could cause 14,000 more premature deaths than it would prevent.[iii] 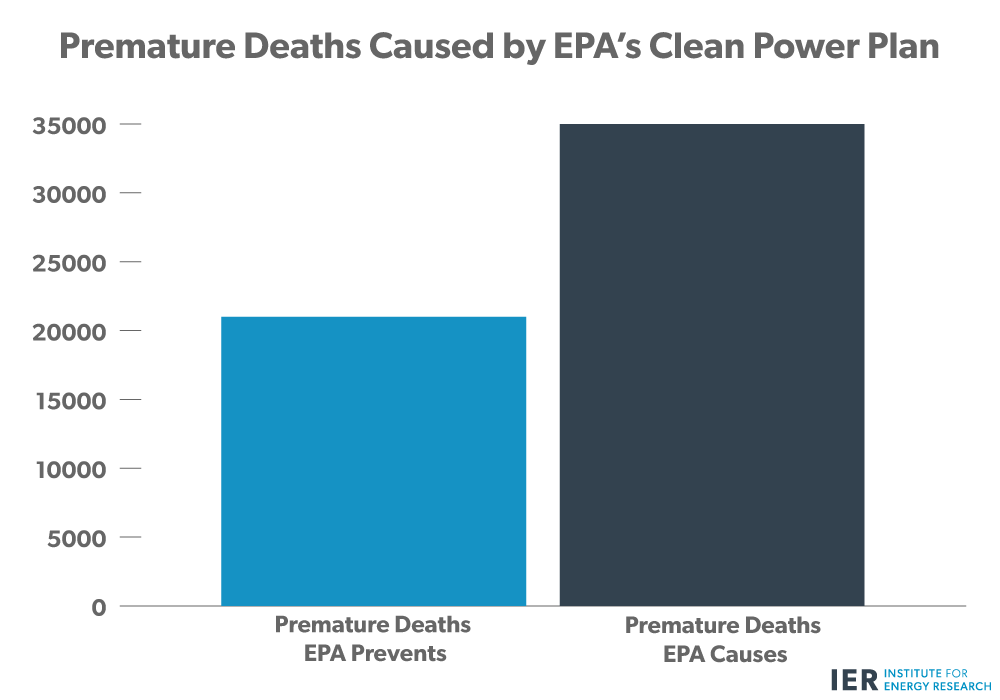 President Obama and the EPA are likely inflating the health benefits and ignoring the health costs of their climate rule. Since the EPA admits the climate rule has no effect on climate change, the agency uses co-benefits, including asthma, to justify its rule. However, the EPA fails to explain why asthma rates continue to rise while pollution continues to fall. In addition, the EPA ignores that its rule could increase asthma development while pushing more families into poverty. The EPA’s rule rests on shoddy science and should be withdrawn.

[i] The number of premature deaths caused by the plan by 2030 was calculated by dividing NERA’s cost estimate through 2031 ($366 billion) by EPA’s valuation of $10.1 million (2011$) for every one premature death in 2030. The $366 billion was adjusted to 2011$ and the resulting number ($353.4 billion) was divided by $10.1 million to get an estimate of 34,990 premature deaths caused by the plan. This estimate is a conservative one, because EPA’s valuation of a human life is lower in earlier years (e.g. 2020), so that when we divide the cumulative compliance figure by $10.1 million, we are dividing by a bigger number than is completely accurate for the estimate.

[ii] See pp. 4-29–4-31 of the Regulatory Impact Analysis. IER added the highest avoided premature mortality numbers related to PM2.5 and ozone and rounded up to the nearest hundred. The result was a prevention of 20,900 cumulative premature deaths through the year 2030.

[iii] Since the number of premature deaths is considered from the 2020–2030 time period and NERA’s estimates cover the period from 2017 to 2031, there is some uncertainty involved in IER’s calculations. Nevertheless, IER’s estimates demonstrate large economic compliance costs that implicate the health of individuals and contribute to premature mortality.