According to a recent peer-reviewed study in Open Journal of Statistics, there has been a pause of global warming for 19 years in the surface temperatures and a pause of between 16 and 26 years in the low troposphere.[i] And, some research suggests that this no-warming trend could last another decade.[ii] Even the United Nations no longer claims that there will be rapid climate change occurring in the next two decades. Between the second and final draft of its fifth assessment report, the U.N.’s Intergovernmental Panel on Climate Change lowered its warming expectations in the 30 years following 1995, to around 0.5 degrees Centigrade from 0.7 degrees (in Fahrenheit, it dropped to around 0.9 degrees, from 1.3 degrees).[iii] But, this has not dissuaded the Obama Administration from continuing its march to regulate all aspects of the hydrocarbon energy industry, thereby increasing current and future energy prices for Americans. The Administration wants to show evidence that they have plans to make Americans pay more for energy at the U.N. meeting to be held at the end of this month, as part of their climate change “name and shame” strategy.[iv] To start, it can report that American households are already paying higher electricity prices.

In the first half of 2014, residential electricity prices increased 3.2 percent compared to the first half of 2013[v] and higher prices can be expected in the future from existing and proposed Environmental Protection Agency (EPA) regulations. Earlier in the Obama Administration, the EPA put in effect the Mercury and Air Toxics Standards (MATS) rule that has resulted in the announced shutdown of about 300 coal-fired units across the United States,[vi] which in turn will result in the closing of coal mines, with commensurate job losses.  The final coal plant toll will not be evident until April 2015, when MATS takes effect, but the number is continually growing. The Government Accounting Office has just indicated that it is estimating over 42 gigawatts of coal-fired plants will be retired, or 13 percent of the fleet, one percentage point higher than its highest previous estimate. Almost 40 percent of the retired coal capacity will be in four states–Ohio (14 percent), Pennsylvania (11 percent), Kentucky (7 percent) and West Virginia (6 percent).[vii]  To put 42 gigawatts of coal-fired power plants in perspective, that is enough power for 26 million homes.

But that regulation was just one of the first steps regarding the Administration’s ‘war on affordable energy’. More recently, EPA proposed that new coal-fired plants must have carbon capture and sequestration (CCS) technology in order to meet proposed new requirements limiting coal-fired plants to only 1,100 pounds of carbon dioxide per megawatt hour of electricity, around 40 percent less than the average U.S. coal-fired plant emits.  Unfortunately for the American consumers, CCS is not commercially available despite EPA’s claims to the contrary. CCS is extremely expensive; it reduces the output and efficiency of power plants (the direct opposite of what the EPA is calling for in its existing power plant rule – see “building block 1”)[viii]; pipelines do not exist to transport the carbon dioxide to a location where sequestration can occur; and opposition to new pipelines and sequestration projects is likely to be significant. (Click here for more detail.)  While this regulation also affects new natural gas plants, EPA’s current proposed limit on their carbon dioxide emissions is in line with the carbon dioxide those plants emit. Thus, this regulation as proposed would prohibit any new coal-fired plants from being built, but would still allow natural gas plants to be added to the fleet for the time being.

On June 2, 2014, EPA announced its plan to order carbon dioxide reductions on existing coal-fired power plants, most of which are not configured to add the necessary environmental equipment even if it were commercially available. The so-called power plant rule mandates the reduction of carbon dioxide emissions from the power sector by 30 percent from a “2005 baseline” by 2030—a sector that has already reduced emissions from its actual 2005 base by 16 percent.  The proposed rule provides each state with a detailed target and a set of “options” that EPA has determined will allow them to reach their assigned requirements for 2020 and 2030. But, in EPA’s analysis, premised under their interpretation of the Clean Air Act that carbon dioxide endangers public health via its impact on the climate and temperature, there is no mention of climate or temperature benefits from the rule. The Cato Institute, using EPA’s climate model, calculated the temperature reduction from the proposed rule to be a mere 0.018 degrees Centigrade by 2100.[ix]  With such de minimus projected benefits; it is easy to see why EPA did not include the “climate benefits” of the rule in its public analysis. 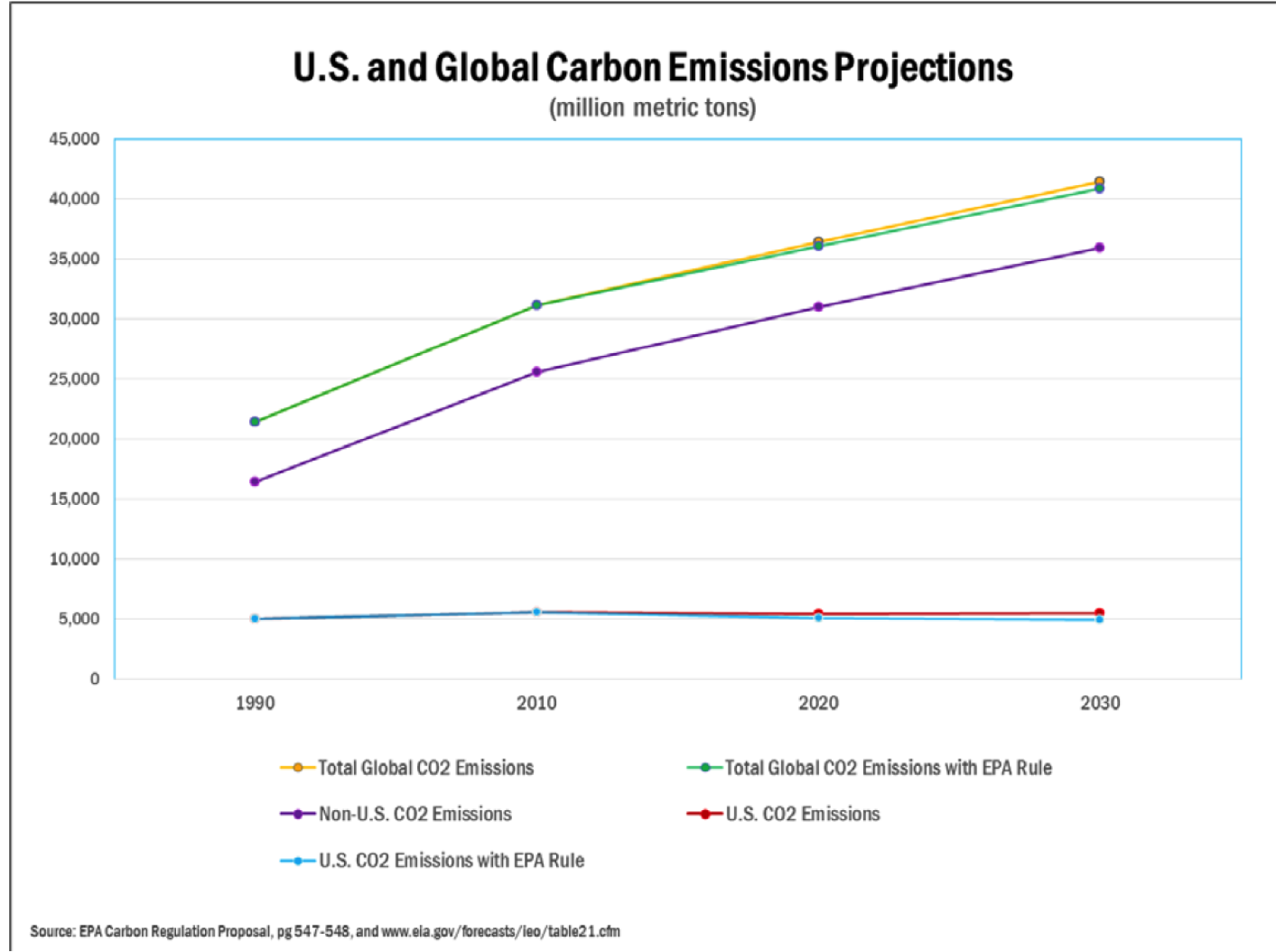 EPA plans on producing an endangerment finding on the public health impacts of aviation emissions from greenhouse gases by April 2015, which will be the first step in the regulatory process to control carbon dioxide emissions from aircraft.  According to EPA’s notification to the U.N., “If a positive endangerment and cause or contribute findings are made, U.S./EPA is obligated under the Clean Air Act (CAA) to set [greenhouse gas] emission standards for aircraft.”[x] A positive endangerment finding would mean that the EPA is declaring that greenhouse gas emissions “endanger public health or welfare.” Depending on the results, EPA will issue a final rule by the spring of 2016.[xi]

Earlier, the Obama Administration had opposed carbon dioxide emission taxes that the European Union wanted to levy on aircraft due to the fact that the tax would be levied by an entity other than the U.S. Congress or the U.S. government. If the EPA does regulate carbon dioxide emissions from aircraft, it would mean that U.S. aircraft would be exempt from an emissions tax imposed by the European Union if it were to enact one because the tax would already be covered by an existing U.S. regulation.

If this EPA rule goes into effect, the airlines will increase ticket prices to cover the tax and the American public will have to pay higher air fares. This rule shows that EPA is planning to cover all aspects of American life since aviation represents only a small amount of U.S. greenhouse gas emissions (3 to 5 percent) and of global greenhouse gas emissions (2 to 3 percent).[xii]

Several studies have tried to quantify the amount of methane leaked into the atmosphere from natural gas operations. Those estimates range from  1.5 percent to  3 percent of natural gas production, and less than the amount produced from agriculture.

Earlier this year, President Obama laid out plans to reduce dairy industry methane emissions 25 percent by 2020 despite U.S. agriculture only accounting for about 9 percent of the country’s greenhouse gas emissions.[xiii] That announcement created an up roar from agricultural states because it would lead to a tax  on cow flatulence[1],[xiv] which will drive up prices on beef for American consumers. EPA is currently barred from regulating methane emissions from livestock production through an “appropriations rider” that expires every year. The cost of regulating cow flatulence to medium-sized dairy farms with 75 to 125 cows could cost between $13,000 and $22,000 a year, and to medium-sized cattle farms with 200 to 300 cows could cost between $17,000 and $27,000 per year.[xv]

EPA is also considering the regulation of the disclosure of substances used in hydraulic fracturing, despite no known cases of water contamination and the dramatic increase in the amount of oil and natural gas produced in this country due to the technology. The public comment period for EPA’s Advance Notice of Proposed Rulemaking regarding hydraulic fracturing substances and potential regulation under the Toxic Substances Control Act (TSCA) ends on September 18, 2014. The EPA will then decide whether it will take action with a potential rule-making to regulate the disclosure of these substances. EPA ended its final webinar regarding the advanced notice on September 3, 2014, addressing the potential impacts of a future rule-making and what factors it may consider in making a determination.[xvi]

If EPA proceeds, it will produce another layer of federal regulatory requirements on top of existing state requirements regarding the disclosure of substances used in the hydraulic fracturing process. Most oil and gas producing states have already dealt with this issue juggling both the rights of the public to know what chemicals are being used in the hydraulic fracturing process and the need for businesses to protect their trade secrets.

The Obama administration’s Department of Energy (DOE) is working on new appliance efficiency standards for refrigerators, dishwashers, air conditioners, ceiling fans, furnaces, boilers, water heaters, lamps and other appliances. According to the Administration, the standards will help control climate change and stimulate the economy by lowering energy bills. According to industry, the standards, which will apply to both commercial and household appliances, could slow the economy by increasing the cost of the appliances due to the new technologies that will need to be developed to reduce energy consumption, thereby raising the retail prices of the appliances.

The increased prices may mean that the majority of consumers will not be able to afford the appliances that meet the new standards. Industry believes that the DOE is rushing the new rules and overestimating the savings, which according to DOE, are supposed to save consumers $49 billion by 2030. DOE finalized new efficiency standards for seven appliances already this year and another three rules are expected by the end of the year. Two rules were finalized in 2013 and three in 2012. Additional efficiency standards for other appliances have been proposed, but will not be completed until after this year.[xvii]

On September 23, the United Nations will host world leaders in New York to pledge urgent action against climate change. Some leaders (from China, India, Germany, Australia, and Canada) have announced that they will not attend the summit and other leaders are expected to follow suit. Perhaps these leaders recognize that there are more pressing issues that the world should concentrate on, such as war, terror, disease, poverty and the 1.3 billion people with no electricity. What would it take for the Obama Administration to stop increasing energy prices for the American public and to realize that there are more important issues that need attention?

[1] Cows and other animals produce methane through digestion, which ferments the food of animals.

[xvii] The Hill, Obama pushes green standards for everything but the kitchen sink, August 29, 2014, http://thehill.com/regulation/energy-environment/216186-obama-pushes-green-standards-for-everything-but-kitchen-sink#ixzz3CNaeddeC