There are plenty of Trump Administration policies to disagree with, but the president’s critics are often so unreasoning and merciless in their hostility that they end up contradicting their own positions. The most recent example is “SharpieGate,” in which—we are assured by all the respectable voices in the media—Trump mistakenly said that Alabama was in danger from Hurricane Dorian, and then childishly refused to admit his error.

Ironically, I can show that this story is simply false, using a Washington Post story that purports to show Trump’s foolishness. As I’ll show, what Trump tweeted out was perfectly defensible, at most reflecting a slight inaccuracy in the degree of probability. In contrast, what the National Weather Service Alabama Twitter account stated was in worse error. And then, to make the whole episode even funnier, the WaPo writers’ attempt to vindicate the Alabama NWS only works by saying a 5 percent chance of a bad weather scenario is the same thing as saying no risk at all. That’s fine if they want to go that route, but of course such a stance pulls the entire rug out from the climate alarmists.

What Trump Tweeted, and Why

In this article, I rely on the basic timelines of events, quotes, and hyperlinks from this Washington Post article, titled, “NOAA backs Trump on Alabama hurricane forecast, rebukes Weather Service for accurately contradicting him.” And yet, as we will see, the Alabama Weather Service did not accurately contradict Trump; NOAA’s statement in defense of the president is perfectly reasonable. 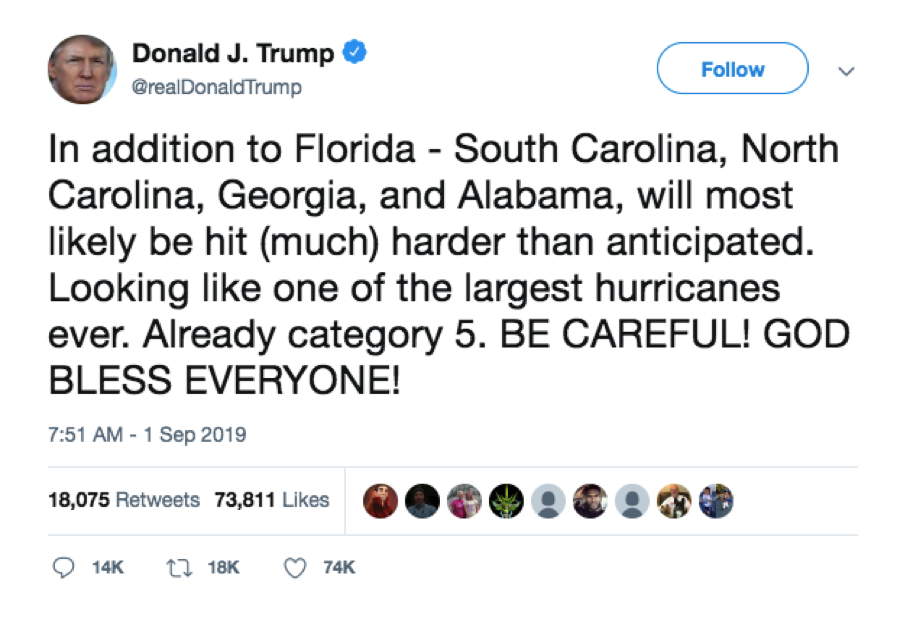 As you can see, Trump was not singling out Alabama for special attention. Rather, his purpose was to say (and I’m paraphrasing), “Hey America, this hurricane isn’t just threatening Florida, as everybody knows. Besides Florida, there are four other states that are most likely going to get hit harder than people think.”

Now what would make Trump say such a thing? Well, he presumably was getting briefings from official government NOAA projections over the weekend. And as the WaPo story itself links to, depending on how far back you go, the briefings show exactly what Trump was tweeting.

For example, as of Friday afternoon, this is what NOAA’s projections showed: 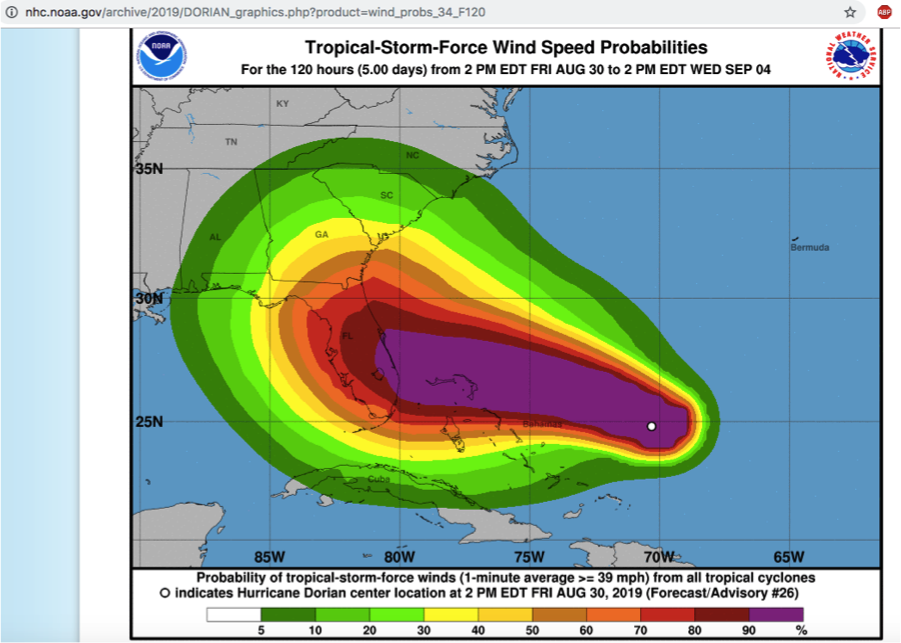 The above graphic shows that most of Alabama—as of Friday at 2pm—had at least a
5-10 percent probability of tropical-storm-force winds, while portions of the state
had a 20-30 percent probability. And more generally, as I stressed above, Trump wasn’t tweeting just about Alabama. Instead, he was merely making the general point that it wasn’t just Florida that was in danger, and since he was being briefed with images like the above, his tweet made perfect sense.

Now it’s true, the projections were constantly updated over the weekend. Here is what the projection was, at the time of Trump’s actual tweet: 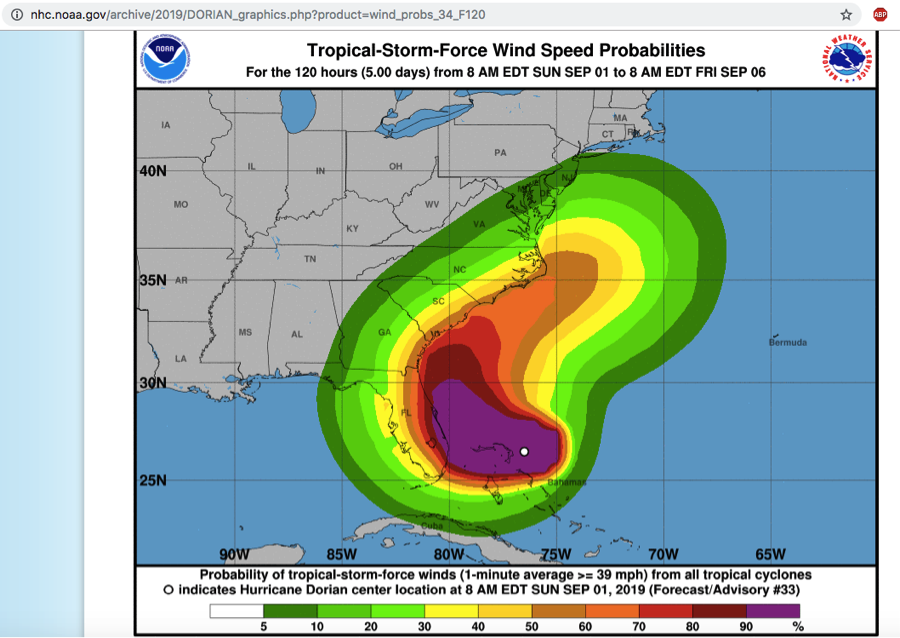 So yes, it’s true that the hurricane had moved, and that at the moment of Trump’s tweet, only a small portion of Alabama was projected to be in danger of experiencing tropical-storm-force winds.

So if the National Weather Service out of the Alabama office had merely tweeted out saying, “No cause for alarm, folks, there’s actually only a portion of the state that has a small chance of experiencing serious wind,” then they would have been correct.

But that’s not what they tweeted. Instead they said this, twenty minutes after Trump’s tweet: 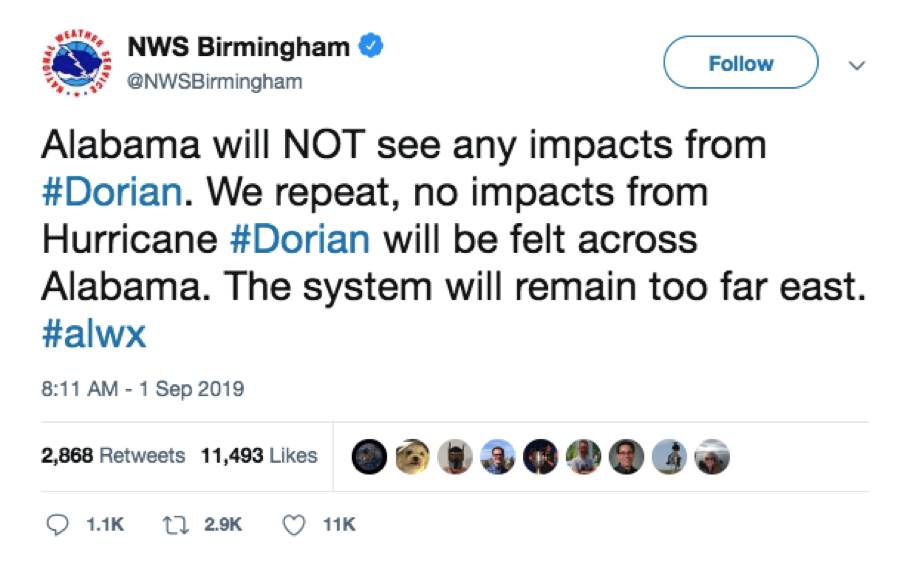 Eh, that’s actually not correct—or at least, that’s not what NOAA was officially projecting, at the moment the National Weather Service tweeted this information to the public. So in terms of inaccurately informing the public, for Trump to (presumably) be relying on an older projection, whereas the NWS is saying “NOT” in caps and ruling out “any impacts,” the latter is arguably the worse misstatement of the actual situation.

Now that I’ve explained what actually happened, here’s how the WaPo writers try to dispose of Trump and his defenders, when they point to the projections I’ve reproduced above:

In the face of criticism about the modified map, Trump fired off additional tweets Wednesday and Thursday, insisting Alabama was at risk all along, including presenting a map from Aug. 29 depicting a small possibility that Alabama would see tropical-storm-force winds.

To repeat, this whole thing happened because Trump wanted to give a general “heads up” to four other states, one of which was Alabama. But if we’re going to get technical as the WaPo writers want to do above, I have an important question:

Are the WaPo writers going on record by saying that if there’s only a 5 percent chance of a damaging weather event occurring in a portion of a region, that that is the same thing as saying, “NOT see any impacts”? Because I hate to break it to the WaPo writers, but the only leg the climate alarmists have left to stand on, is to say that we can’t entirely rule out the small probability of a catastrophe hitting certain parts of the globe. (Read the NYT obituary of the recently—and tragically—deceased Martin Weitzman. He was lauded in the climate alarmist community precisely because he came up with fancy mathematical tools to prevent policymakers from ignoring unlikely catastrophes.)

Here’s another way of putting it. Recently Elizabeth Warren claimed in public that climate change is an “existential threat” that “threatens all life on this planet.” Is the Alabama National Weather Service going to sharply rebuke her ludicrously unscientific warning? Are the WaPo writers going to mock her statement, which is light-years more inaccurate than Trump’s tweet relying on day-old NOAA projections?

I don’t need to be coy in this article. Obviously the fact that someone used a Sharpie on a weather map is hilarious, and I understand why Trump’s critics would have a field day with it. But as so often happens, the outrage over SharpieGate is so far out of proportion, that you end up basically siding with the president. Furthermore, the episode doesn’t reflect a mere scrupulousness for the facts. What the National Weather Service’s Birmingham office tweeted out was a bit too sweeping, and in any event, Democratic political figures issue completely ludicrous claims about climate change that dwarf the inaccurate assessment of probabilities involved in SharpieGate. Since I don’t see Trump’s media critics leveling the same scorn at Elizabeth Warren et al., I don’t believe their claimed devotion to science.