Nicholas Stern—author of the famous and controversial 2006 “Stern Review” that argued for draconian restrictions on carbon dioxide emissions—is back in the news. His recent article in Nature argues that the current models assessing the risks of climate change are “grossly misleading,” and that economists in particular need to update their approach to better inform policymakers.

Stern’s piece confirms what I have been saying for years: The “consensus” and “settled science” as epitomized in the IPCC reports and the Obama Administration’s Working Group on the Social Cost of Carbon do not support the aggressive policy goals put forward matter-of-factly by interventionists, including the Obama Administration. That is why Stern is now telling the public that the standard climate models are “grossly misleading.” Yet what is new in this latest episode is how much Stern misleads his readers about the typical climate/economic model—including the one Stern relied on in his own Stern Review.

Who Is Nicholas Stern and Why Should He Know Something About Climate Change Economics?

For those not following climate change economics, this is who Sir Nicholas Stern is according to Wikipedia:

Nicholas Herbert Stern, Baron Stern of Brentford…is a British economist and academic. He is IG Patel Professor of Economics and Government, Chair of the Grantham Research Institute on Climate Change and the Environment at the London School of Economics (LSE), and 2010 Professor of Collège de France. Since 2013, he has been President of the British Academy. 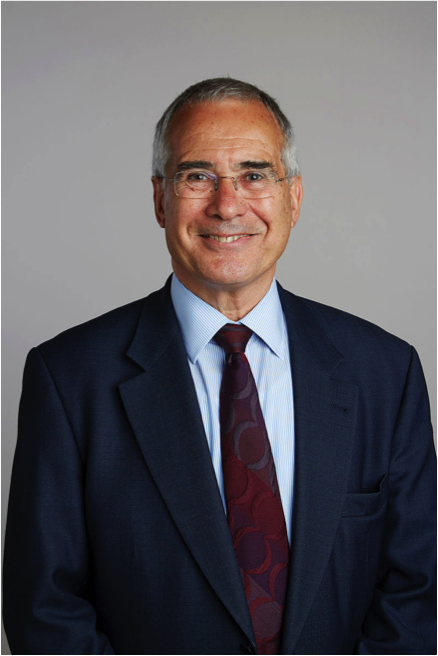 From 2000 to 2003, Stern was the World Bank’s Chief Economist and is currently Chair of the Centre for Climate Change Economics and Policy at Leeds University and LSE.

In the mid-2000s Stern worked for the UK government and created the 700-page Stern Review on the Economics of Climate Change.

Given Stern’s background, education, and current occupation, he should be an expert in climate change economics.

The following excerpt from his recent Nature article showcases Stern’s call for more accurate models that capture the true threat from climate change:

Current economic models tend to underestimate seriously both the potential impacts of dangerous climate change and the wider benefits of a transition to low-carbon growth. There is an urgent need for a new generation of models that give a more accurate picture.

IAMs [Integrated Assessment Models] are also used to calculate the social cost of carbon (SCC). They attempt to model the incremental change in, or damage to, global economic output resulting from 1 tonne of anthropogenic carbon dioxide emissions or equivalent. These SCC estimates are used by policymakers in cost–benefit analyses of climate-change-mitigation policies.

Because the IAMs omit so many of the big risks, SCC estimates are often way too low. As a first step, the consequences being assessed should include the damages to human well-being and loss of life beyond simply reduced economic output. [Bold added.]

Especially with the part I’ve put in bold above, Stern is clearly giving the impression to his readers that the current batch of models merely looks at how much climate change will, say, reduce the output of automobiles, without including the hard-to-quantify damage on quality of life and loss of ecosystems.

But this is totally wrong. The leading models already do include such items in their assessments of the impact of climate change. They put these impacts in dollar or GDP terms, to be sure, but that’s because you have to reduce everything to a common denominator if you’re going to give data for a cost/benefit calculation to see if particular policies (such as a carbon tax or a rule on power plants) make sense.

One can say this entire enterprise is dubious, or one can agree with the premise and quibble about the calculations, but Stern is himself being “grossly misleading” when he writes as if the current economic models of climate change only focus on narrowly “economic” damages.

Richard Tol, one of the world’s leading authorities on the economics of climate change, had a field day on social media in reaction to Stern’s nonsensical pleas. Specifically, Tol is the developer of the FUND model, one of the three selected by the Obama Administration’s Working Group. Here is Tol reacting on Twitter to Stern’s recent Nature piece and the discussion that followed: 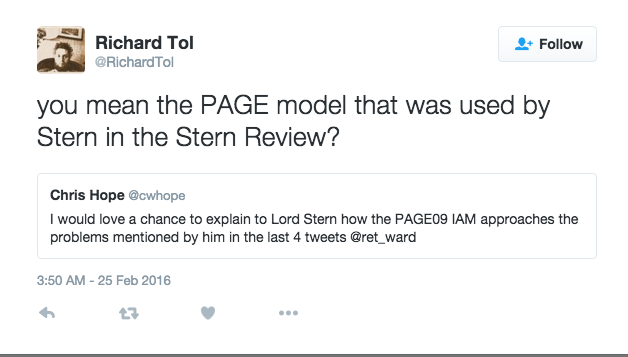 To explain Tol’s joke: In his famous “Review,” Richard Stern relied on the Integrated Assessment Model (IAM) called PAGE, which was developed by Chris Hope. (Incidentally, this was another of the three models chosen by the Obama Working Group.) Let’s quote from page ix of the Executive Summary of the Stern Review:

The Review uses the results from one particular model, PAGE2002, to illustrate how the estimates derived from these integrated assessment models change in response to updated scientific evidence on the probabilities attached to degrees of temperature rise.

The irony here is that if you look at Hope’s explanation of the 2002 version of his model, you’ll see that he explicitly discusses its ability to model “risks to unique and threatened ecosystems” and “risks from extreme climate events.”

The FUND Model Already Does What Stern Wants

It’s possible that Tol is particularly amused/annoyed by Stern’s misleading article because Tol himself has published a large collection of papers, using his FUND model, in order to assess different impacts of climate change on human well-being.

For example, in this 2011 paper, Tol and a co-author explored the possibility of a collapse in the thermohaline circulation (THC). By way of introduction, they explain how the FUND model works and where its inputs come from. Let me quote from that summary to show how much the FUND model—and this was where it stood back in 2011—already includes the very things that Nicholas Stern is demanding of future models of climate change:

The FUND model has been used for many purposes, but its main strength has always been the impacts of climate change. Earlier versions had 9 regions, and later versions 16. In this paper, we discard most of the model, and only retain the impact module. This part, however, is reparameterized for 207 countries…We now present the national impacts module of FUND 2.8…

Schistosomiasis, dengue fever and malaria are assumed to be linearly related to warming. The vulnerability is based on the 1995 data in WHO (1995)…

Diarrhea mortality is more than linear in warming with a power of 1.14, while vulnerability falls with an income elasticity of 1.58…

The impacts of sea level rise are derived from Hoozemans et al. (1993) and Bijlsma et al. (1996). There are no more recent global impact studies; see Nicholls and Tol (2006) for a current review. Without coastal protection, wetland and dry land losses are assumed to be linearly related to sea level rise. The global mean sea level is determined by a geometric series depending on temperature that is calibrated based on the IS92a scenario in Kattenberg et al. (1996). Dry land losses decline linearly with protection, but wetland losses increase linearly with protection…

As the above discussion makes crystal clear, the leading IAMs already do incorporate impacts on human welfare beyond the narrowly “economic.” Stern’s article in Nature is utterly misleading when it implies that currently the economic models of climate change only focus on conventional output like TVs and cars.

Also both Tol and Chris Hope show up in the comments to Stern’s article in Nature to explain that Stern should know better than to make the claims Stern made. Tol explains: 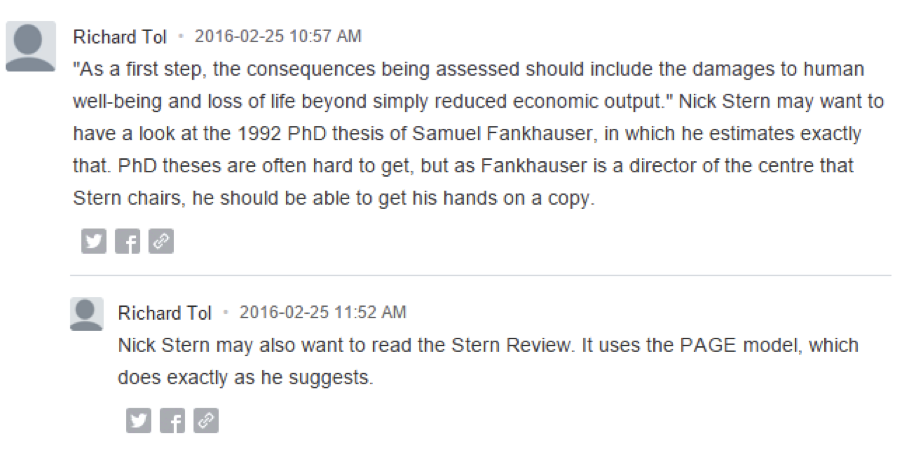 To be sure, I am not in this post endorsing the leading models of the economics of climate change or suggesting that policymakers should be setting taxes or mandates on the basis of a computer simulation. Rather, I am pointing out the absurdity of leading interventionists now telling us that the decades of “consensus science” are apparently worthless, since they don’t tell us how bad the situation is. Further, it is particularly ironic that Sir Nicholas Stern of all people misleads his readers on what is contained in the latest batch of computer models, since his own Stern Review relied on one of them for its numbers.

It is amazing to behold how some of the ostensible experts on climate change economics are now telling us that they no longer believe in the published, peer-reviewed models featured in the IPCC reports and used by the Obama Administration in its calculations for regulatory analysis. It would have been nice if Stern and others had given more emphasis a decade ago to how “grossly misleading” these state-of-the-art models were. But back then, people who discussed the inadequacies of computer simulations of the economy and climate were dismissed as know-nothing science deniers.

Coal Continues to Struggle at Hands of Federal Government