This week, 118 national leaders will be meeting in Paris for the climate change summit where President Obama will be proselytizing about his EPA’s so-called Clean Power Plan, among other U.S. regulations affecting energy use in the United States. The Clean Power Plan requires carbon dioxide emissions from the electric power sector to be reduced by 32 percent by 2030 from 2005 levels. While the EPA argues its rule is virtually costless, other forecasters have found it to increase electricity prices in all 47 states affected by the rule. In fact, 40 states are expected to see electricity price increases in the double digits. More than half our states are expected to see electricity price increases of more than 20 percent. President Obama promised to hurt American electricity consumers by escalating prices, which will lower global carbon dioxide emissions by less than 1 percent and will reduce temperatures in 2100 by a mere 0.02 degrees Celsius. That’s a lot of expense for nearly no gain.

But President Obama is not stopping there. He has met with Chinese and Indian officials to try to get their collaboration in reducing greenhouse gas emissions. China is now the number one carbon dioxide emitting nation and India will eventually surpass the United States in carbon dioxide emissions. However, these governments want to develop their economies and provide power to their residents without it, so they have not committed to reducing greenhouse gas emissions, but rather having them peak at a future date or to reduce the intensity of their emissions (i.e. the amount of carbon dioxide emitted per unit of GDP).

China has agreed to peak its carbon dioxide emissions around 2030 and increase the non-fossil fuel share of all energy to around 20 percent by that date.[i] Under the deal, China is allowed to emit 2.5 times as much carbon dioxide as the United States will be allowed to emit in 2030, when China may begin to reduce its emissions. What is even more frustrating is that China’s data is suspect. China’s National Bureau of Statistics (NBS) recently admitted that it had underestimated coal consumption, which the country now says is 17 percent higher than originally thought.[ii] (See graphs below.) 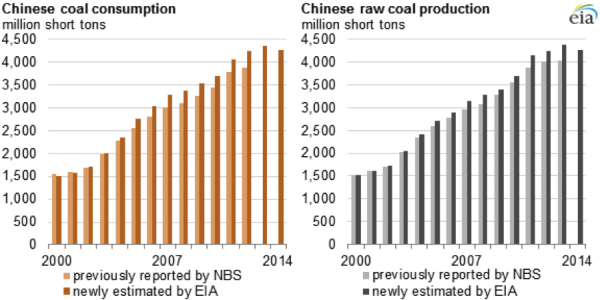 Further, President Obama has consolidated a deal with officials from the Organization of Economic Cooperation and Development (OECD), reaching an agreement to end global financing of new coal power plants that will restrict inexpensive generating technology for developing nations. The agreement will end export credits for coal plant technology, which many poor nations rely on to bring low cost electricity to its residents. Despite cuts to global subsidies not beginning until 2017, the deal is expected to kill 850 planned coal plant projects around the world, cutting funding for export credits for 85 percent of new coal plant projects going forward.[vi] This agreement puts a damper on Japan and other countries supporting coal power investments in developing countries, though there is a compromise in the agreement that permits funding of advanced technology plants that employ emission reduction technologies such as carbon capture.[vii] Incidentally, neither China nor India are part of the OECD, and thus would not be bound by such restrictions if they choose to finance the export of their coal technologies to developing nations.

President Obama and the Democratic candidates running for President of the United States believe that climate change is our number one challenge and that it is related to the growth in terrorism. However, global surface temperature has risen only about 0.8°C in the last 125 years, which can be the expected temperature variation if one drives just 150 miles south.[viii] The ludicrousness of putting climate change as the nation or world’s number one challenge is costly, and will only result in Americans suffering for no real global gain.

It is a curious situation that the richest, most energy consuming nations on Earth seek to reach an agreement that would stop poorer developing nations from experiencing the rapid and sustained growth that history shows energy provides for people and their economies. While such an agreement would concentrate more power in the hands of national leaders and the companies and businesses they favor, it would undeniably hurt the poorest people in the world, and in the case of the United States, hurt the poorest among us. Paris is for the elites, who seem to want to have nothing to do with the working men and women of the world who aspire for a better future for their children.

Is EPA Fudging the Numbers for its Carbon Regulation?