Most modelers calibrate their base cases to the Energy Information Administration (EIA)’s most recent Annual Energy Outlook (AEO) when conducting analyses of energy issues. In fact, since EIA is the premier energy information source for the federal government, it would make sense that agencies turn to their expertise and numbers when calculating those measures which might involve energy. However, the EPA stands out because its regulatory agenda has enormous impacts on energy cost and availability, but it frequently chooses not to use EIA’s numbers.

Creating its own energy modeling separate from that of EIA results in EPA regulations that appear more economically feasible than they otherwise would. But it is ironic that EPA complains about a lack of funding while simultaneously spending EPA resources to duplicate the modeling EIA does.

Comparison of Generating Capacity in EIA and EPA Base Cases

The loss of 55 gigawatts of coal-fired generating capacity from the electric fleet in EPA’s analysis means that it appears there will be less coal-fired capacity that will need to be shuttered due to the so-called “Clean Power Plan” making it less expensive in EPA’s analysis to comply with the rule. For perspective, 55 gigawatts is more capacity than the total installed coal capacity of any country expect China, the United States, and India.[iii] To further put it in perspective, Germany has about 51 gigawatts of total generating capacity meaning that EPA’s modeling assumes that enough capacity to power one of the largest economies in the world disappears by 2020. 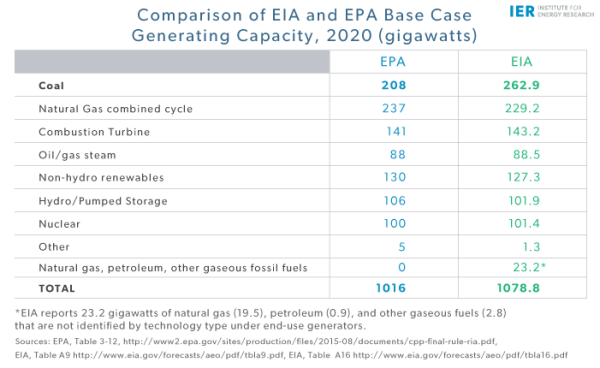 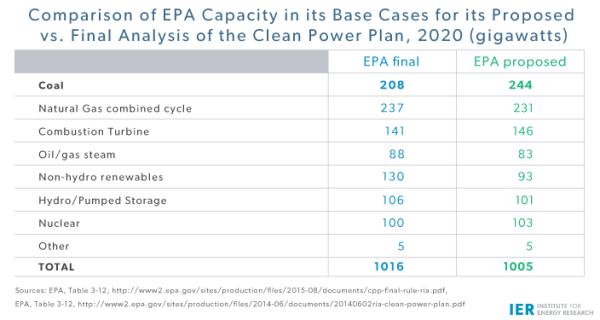 EPA Analytical Results Are Radically Different from Other Analyses

According to a study by NERA Economic Consulting, EPA’s so-called “Clean Power Plan” will hike electricity prices in all 47 states that are subject to the regulation. Of those 47 states, 40 states would see average electricity prices rise by 10 percent or more and 27 states would see average electricity prices increase 20 percent or more.[vi] Further, losses to consumers would range between $64 billion and $79 billion on a present value basis between 2022 and 2033. Energy sector expenditure increases would average between $29 and $39 billion per year. Energy expenditures in this analysis include changes in electricity generation costs, energy efficiency costs, and natural gas costs to non-electric consumers, but does not include increased costs for transmission and distribution and natural gas infrastructure.

It is not surprising that EPA’s analysis of its regulation of carbon dioxide from power plants would differ from other analyses that calibrate to EIA’s report because EPA makes the heroic assumption that enough generating capacity to power Germany disappears without this regulation.

When EPA promulgates rule after rule against the electric generating sector, it is not unexpected that electric generating owners will shutter a plant early rather than make modifications to comply with ever increasing amounts of red tape. What is disingenuous, however, is that EPA magically changes its base case coal-fired generating numbers to make compliance less expensive as it did between its analysis of its proposed vs. final rule. While other modelers calibrate to EIA’s base case, EPA clearly does not. So, it looks like the agency is “fudging the numbers” in order to get a desired result.

The Farce of the Paris Climate Summit