According to a recent study by NERA Economic Consulting, EPA’s regulation of carbon dioxide from power plants, the so-called “Clean Power Plan” (CPP), will hike electricity prices in all 47 states that are subject to the regulation. Of those 47 states, 41 states are projected to see double-digit “peak” electricity price increases and 28 states are projected to see “peak” electricity price increases greater than 20 percent.[i] The plan’s projected cost of at least $29 billion annually is three times greater than the cost of EPA’s Mercury and Air Toxics rule, to which the U.S. Supreme Court stated, “It is not rational … to impose billions of dollars in economic costs in return for a few dollars in … benefits.” The benefits of the CPP are miniscule, reducing global carbon dioxide emissions by less than 1 percent and global temperatures by 0.02 degrees Celsius by 2100, according to EPA’s own models.[ii] 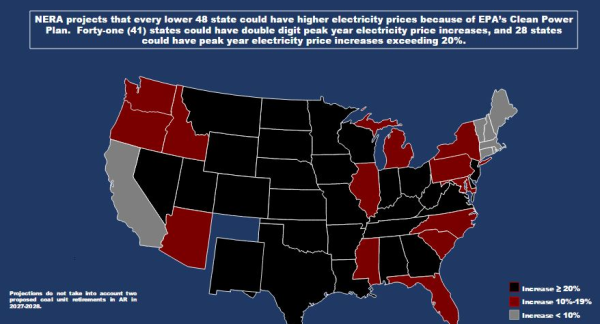 NERA evaluated 2 scenarios, using an energy economic model, evaluating the impacts relative to a base case without the CPP, which is calibrated to the Energy Information Administration’s Annual Energy Outlook 2015. The scenarios differ based on the amount of trading assumed: either intra-state or regional. Regional trading is based on the 6 regions developed by EPA and depicted below:

The analysis determines the least cost compliance options from those the CPP allows, including end-use energy efficiency. For each scenario, two different assumptions are evaluated based on the allocation of allowances to local distribution companies (LDCs):

It is assumed that the LDCs pass free allowances to electricity consumers by lowering rates. However, regardless of the case, the revenue from the allowances is returned to households either through lower rates or through other means. 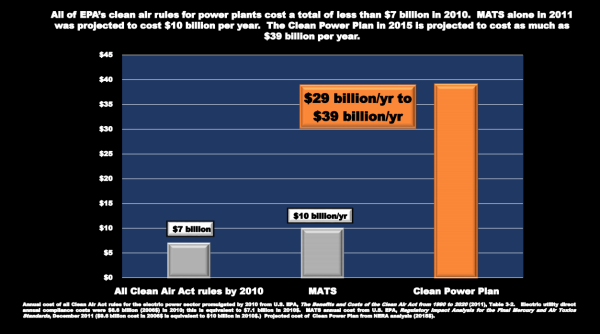 According to the NERA analysis, the EPA has severely underestimated the cost of compliance with its regulation of carbon dioxide from power plants, and by doing so it is trying to make Americans believe that the government can force the electric generating sector to eliminate a massive amount of low-cost coal-fired generation for little or relatively no cost. U.S. consumers of electricity will pay for prematurely retiring coal-fired plants through substantially higher electricity prices. Because EPA has set emission reduction targets by state, the impact of the higher costs will not be borne equally, but 40 states (out of 47 affected) could see average electricity prices rise by 10 percent or more and 27 states could see average electricity prices increase 20 percent or more.

The CPP, if allowed by the courts to proceed, will be the costliest EPA regulation affecting the U.S. generating sector and all Americans consumers. With no real impact on temperature – 2/100ths of one degree celsius in 2100 – the EPA’s regulation seems more consistent with President Obama’s campaign promise to make “electricity prices necessarily skyrocket” than to moderating global climate change. Policymakers should know that this costliest of electric power regulations actually achieves meaningless progress towards the goal that EPA uses to justify it.

Is EPA Fudging the Numbers for its Carbon Regulation?