Responding to the terrorist attacks in Paris, economics Nobel laureate and New York Times columnist Paul Krugman urged Americans to resist fear-based rhetoric from people with a political agenda. Sensible enough advice, except that Krugman then went on to say that when it comes to his preferred agenda—which includes massive new government interventions in the energy sector—then all of a sudden the fear-mongering rhetoric is spot-on. Indeed, Krugman went so far as to ludicrously claim that civilization itself hangs in the balance when it comes to climate change.

In this post I’ll draw on the latest UN climate change report to show that the much-ballyhooed peer-reviewed consensus literature makes no claim that global warming will destroy civilization, except in the vacuous sense in which dozens of possible threats—ranging from asteroids to cheap suitcase nukes to killer viruses to super-intelligent computers to hostile aliens to supercollider-created “strangelets”—hypothetically might destroy life as we know it. But in terms of a rational evaluation of dangers according to their likelihood of occurrence, climate change doesn’t threaten civilization itself any more than the terrorist groups Krugman dismisses in his column.

To set the context, here is Krugman’s position on the reaction of some right-wingers to the Paris attacks:

Like millions of people, I’ve been obsessively following the news from Paris, putting aside other things to focus on the horror. It’s the natural human reaction. But let’s be clear: it’s also the reaction the terrorists want. And that’s something not everyone seems to understand.

Think, for a moment, about what France is and what it represents. It has its problems — what nation doesn’t? — but it’s a robust democracy with a deep well of popular legitimacy. Its defense budget is small compared with ours, but it nonetheless retains a powerful military, and has the resources to make that military much stronger if it chooses. (France’s economy is around 20 times the size of Syria’s.) France is not going to be conquered by ISIS, now or ever. Destroy Western civilization? Not a chance.

Krugman spends most of the rest of his column complaining about Republicans who supported military intervention in response to such tragedies (though he inexplicably fails to mention that his preferred candidate Hillary Clinton voted in favor of invading Iraq—I guess Krugman ran out of column space). Yet he can’t restrict himself to the issue at hand, and offers us this throwaway remark:

Finally, terrorism is just one of many dangers in the world, and shouldn’t be allowed to divert our attention from other issues. Sorry, conservatives: when President Obama describes climate change as the greatest threat we face, he’s exactly right. Terrorism can’t and won’t destroy our civilization, but global warming could and might. [Bold added.]

Beyond being guilty of the exact same fear-mongering that his column supposedly criticizes, notice that Krugman isn’t even being consistent: Even the most over-the-top warnings about climate change destroying civilization play out over the course of centuries. So is Krugman saying terrorists in the next 200 years can’t figure out ways to accelerate climate change? What if ISIS recruits millions of people around the world to set trees on fire for the next century? After all, that’s a lot less dangerous than other types of terrorist missions.

In an earlier IER post, I showed that the latest UN report on climate change—specifically, the Fifth Assessment Report (AR5) of the Intergovernmental Panel on Climate Change (IPCC)—cannot justify in cost/benefit terms a popular goal of limiting global warming to 2 degrees Celsius. In our current post, let me just reproduce two key pieces of evidence from that report to show just how baseless Krugman’s rhetoric is.

Before proceeding, let me issue a caveat: I am not saying that we should blindly endorse whatever is in the latest IPCC report. Yet my point is that the whole purpose of these periodic reports was to show the world what the “consensus science” said, in order to inform the policy debates over climate change. So if progressives are going to use the IPCC reports to bludgeon anyone on talk radio who says Al Gore is a fraud, then I am going to point out when people like Krugman say things that are not remotely supported by the IPCC reports. One could even say that Krugman is denying the climate science himself.

First, let us see what the projections are of global warming under various “representative concentration pathways” (RCPs): 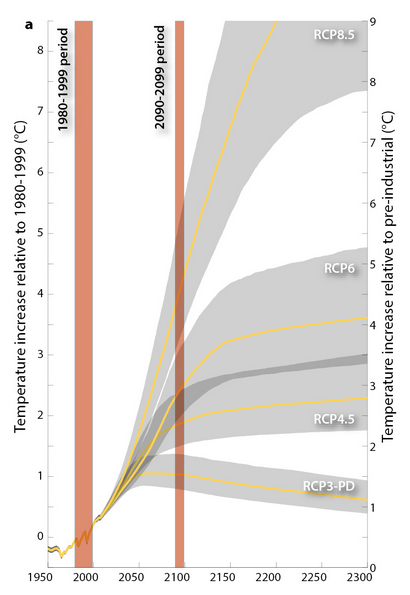 The top band shows RCP 8.5, which is the most aggressive or “pessimistic” of the pathways, in the sense that it paints the bleakest possible future of the scenarios studied. We can think of this as what the IPCC’s chosen computer models project will happen to the Earth’s temperature under “business as usual,” but actually the AR5’s RCP8.5 is more pessimistic than previous “business as usual” scenarios in earlier IPCC reports.

In the graph, the yellow lines show the mean estimate of warming for a given representative pathway of atmospheric concentrations of CO2, while the gray bands show the 5% – 95% confidence interval around those point estimates. Thus we see that by the year 2100, even in the most pessimistic outcome, the chart shows that the most warming we could expect is 5.4 degrees Celsius relative to preindustrial temperatures (the right axis). The mean estimate of warming—even if we’re talking about the most pessimistic scenario of RCP 8.5—is a more modest 4.3 degrees of warming (the yellow line in the middle of the gray band). You can see this same information typed out in Table 12.3 on page 1056 in Chapter 12 of the IPCC AR5 report.

So if we see that the UN’s own report shows that even “unrestricted” climate change will—with 95% confidence—produce at most about 5 and a half degrees of warming by the end of the century, we need to now ask: How dangerous is such warming?

Fortunately, the UN report gives us a range of estimates from the peer-reviewed literature: that’s what the UN report is for, after all. And here’s what the table of the estimated damages looks like: 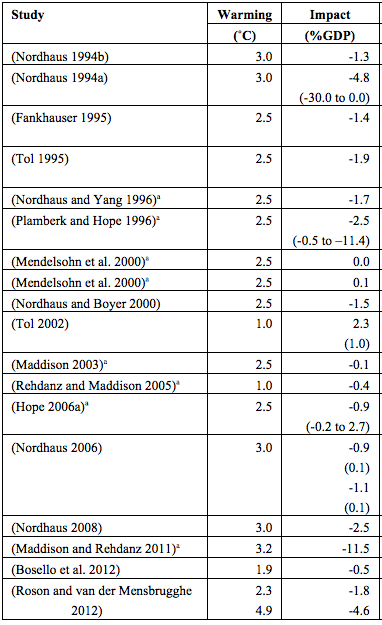 Well, the table doesn’t say what happens with five and a half degrees of warming, because there haven’t been careful studies on it. But look at the study at the bottom of the table: It shows that for warming of 4.9 degrees Celsius, the globe forfeits 4.6 percent of GDP. And the worst outcome in the table shows an 11.5 percent drop in GDP.

Those sound like alarming figures, but there are two things to keep in mind: First, these refer to a drop relative to the counterfactual trend. For example, if we conservatively estimate global real GDP growth at 2 percent per year, then global output will have quintupled by the year 2100. It is from that height that the possible harms of climate change must be subtracted. Or for another angle, consider this OECD forecast that by the year 2060, real income per capita in the poorest countries will have quadrupled relative to today, with China and India’s people enjoying a sevenfold increase in living standards. Bottom line: Our great-grandkids are going to be much, much richer than we are, even in the “worst case” scenario documented in the latest UN climate change report, and even in the regions that the alarmists say are most vulnerable to climate change.

Second, when interpreting the UN figures regarding the potential damages from climate change, we must also consider the same UN report’s estimates for the economic costs of trying to mitigate emissions. As I explained in great detail in this previous IER post, the same IPCC report shows that it would do the economy more damage to limit warming to 2°C, than we would spare in damages from additional warming.

Under any realistic scenario, the UN’s own climate change report shows that Paul Krugman is being ridiculous when claiming that global warming threatens civilization itself. Of course, he’s parroting the politicians whose politics he adores, regardless of their veracity. Now to be sure, if we go out to the year 2300, anything can happen in a computer simulation. But by the same token, is Krugman really able to confidently assure us that terrorists pose no big threat over the next 285 years?

Progressive leftists can’t have it both ways. If they want to (understandably) criticize their opponents for fear-based rhetoric justifying foreign policy goals, then these progressives should practice what they preach and stop trying to terrify everyone about climate change. Their alarm bells are especially unjustified because their claims aren’t supported by the very “scientific consensus” that they trumpet in other columns. What are these guys, a bunch of science deniers?