Energy Ventures Analysis (EVA) just released its analysis of the EPA’s “Clean Power Plan” (CPP), which mandates a 32 percent reduction of carbon dioxide emissions from the electric generating sector by 2030 from 2005 levels. While EPA claims the regulation will be virtually cost free, this study finds:

Further, 41,000 megawatts of perfectly good electric generating capacity will be forced to prematurely retire, costing the nation $64 billion to needlessly replace. While the costs of the regulation are high, the carbon dioxide reductions are almost non-existent. The regulation would reduce global carbon dioxide emissions by less than 1 percent and global temperatures by 0.02 degrees Celsius by 2100, according to EPA’s own models.[i]  The CPP appears to be more of an excuse to fundamentally transform the nation’s electrical generating system from a reliable and affordable one to one that burdens Americans with costly and unreliable energy, consistent with President Obama’s promise to make “electricity prices necessarily skyrocket.”

The study found that EPA’s analysis of the regulation was flawed in several ways:

To reach the 32-percent reduction in electric generating emissions, the EPA mandates specific emission reduction targets by state. Instead of setting an emissions standard based on what available technology could achieve at individual power plants, EPA constructed a hypothetical electric grid that provides the required level of carbon dioxide emissions reductions. The design forces coal-fired electric generating capacity to retire despite its being the largest source of base load power in the country.

To obtain the impact of the CPP, EVA modeled a base case without the plan and a case that includes it, incorporating a carbon price that results in the carbon dioxide emission reductions that EPA set for each state. The transition from low-cost coal-fired generation to renewable and natural gas-fired generation results in higher electricity rates for consumers and higher natural gas prices to consumers in all sectors.

EVA calculates a 21.2 percent increase in consumer power bills nationwide in 2030 due to the CPP, representing a cost increase of $214 billion between 2012 and 2030. These are costs above normal price increases consumers might expect. There is also a $64.4 billion cost to replace the 41 gigawatts of coal-fired capacity that was forced to retire prematurely due to the rule. Due to different targets for carbon dioxide reductions set by EPA for the states, wholesale electricity price increases vary significantly by state–from 9 percent in California to 31 percent in Ohio. (See chart below.) Forty-five out of the 47 states for which EPA set targets have price increases that are in the double digits by 2030. Further, 16 states have price increases of 25 percent or more. 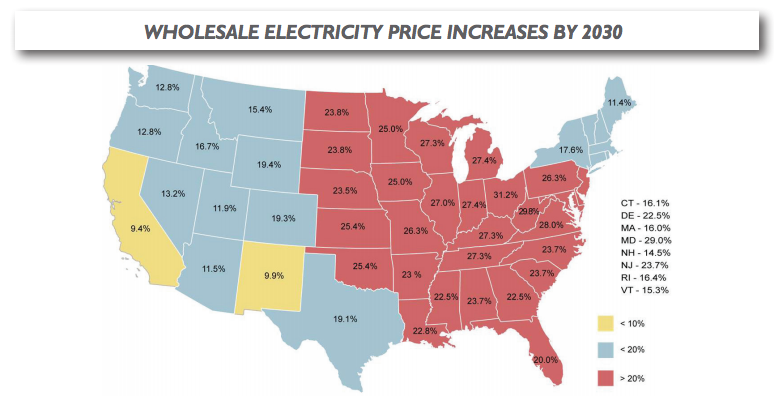 Commercial and industrial consumers will experience the same price increases and will likely pass those costs onto consumers in the prices for goods and services. Increased natural gas demand in the power sector will result in higher natural gas prices for residential, commercial, and industrial consumers, whose bills are projected to increase by $6 to $8 billion per year. The increased natural gas demand will likely require additional investment in pipeline capacity, whose costs are also likely to be passed onto consumers.

EVA projects that 41 gigawatts of coal-fired capacity will be prematurely retired—enough generation to serve around 24 million homes or about three times the generation requirements of Texas. EVA calculates that the investment cost for the new generating capacity to replace the retired coal-fired capacity and the associated transmission costs will total $64.4 billion by 2030. The cost by state is depicted in the graph below. 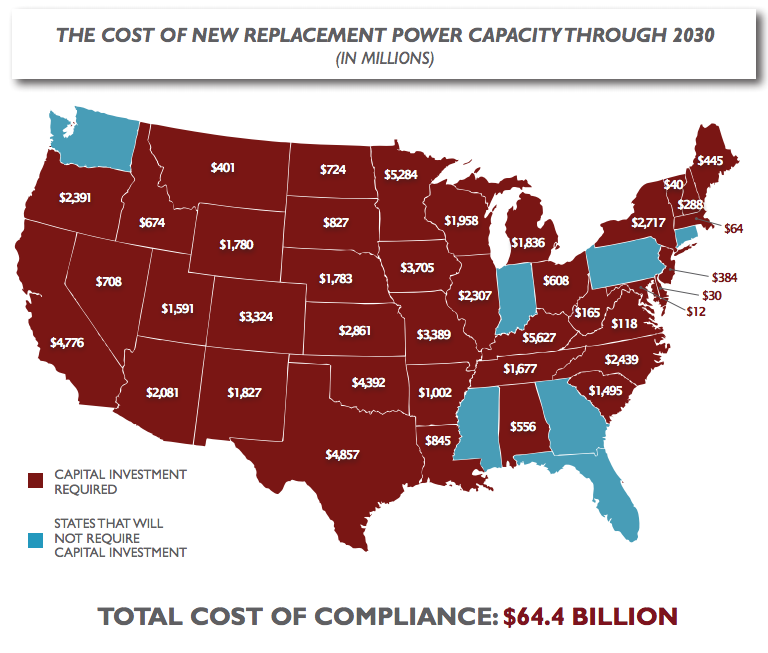 According to the EVA analysis, the EPA has severely underestimated the cost of compliance with its CPP — costs that will be passed onto electricity consumers and will bear on the competitiveness of American businesses and industries. Further, all sectors of the U.S. economy will see higher electricity costs—21.2 percent higher on average for the country in 2030—resulting in higher cost goods and services. Because EPA has set emission reduction targets by state, the impact of the higher costs will not be borne equally. The CPP will force low cost, coal-fired electricity to be prematurely retired so that EPA can transform the nation’s electric grid to its liking. The financial impact of the rule will be significant, yet the environmental benefits will be barely measurable, causing Americans to suffer for very little global gain.

The “Costly Power Plan” designed by the EPA at the direction of President Obama is all pain, and no gain, but it does fulfill his campaign promise to make electricity prices skyrocket. Higher energy prices weaken US competitiveness and hurt families and businesses. The impacts on the climate are invisible, but the impacts on the poorest Americans will be plain for all to see far into the future.