The Bureau of Labor Statistics (BLS) has unveiled a new “Green Goods and Services” (GGS) measure that it will update annually. An article in the National Journal highlights how this misleading and meaningless figure will be used to further promote inefficient energy policies. Simply sifting through the government’s own report shows how expansive the definition is—after all lawyers, federal and state bureaucrats, zoo workers, people who write grant proposals, and sewage workers all count as green jobs. Yet even if the figure could accurately be defined, it wouldn’t provide a justification for the government to steer resources into channels away from where the market would direct them. Interfering with the private sector reduces efficiency, leading to lower wages and higher prices for consumers.

To understand how the BLS’s green jobs number can easily be misinterpreted, consider an article in the National Journal  trumpeting the new announcement:

In 2010, 3.1 million U.S. jobs were associated with the production of environmentally friendly goods and services, representing 2.4 percent of total U.S. employment, the Bureau of Labor Statistics reported on Thursday.

The figures represent the first hard federal data quantifying the notoriously squishy subject of “green jobs,” and finally give advocates of clean energy a concrete set of employment numbers to point to. The data, which will be updated annually, provides a baseline against which future growth in the sector will be measured.

Among the report’s findings: nearly all green jobs (2.3 million) are in the private sector, and the sectors with the most green jobs also were among the hardest-hit by the recent recession—manufacturing (with 461,847 green jobs) and construction (372,077 green jobs). There are 349,024 green jobs in professional, scientific, and technical services, according to the report.

By comparison, there were 783,000 jobs in the oil, gas, and coal-mining industries and related services….That provides clean-job proponents with ammo for a direct attack on Republicans, who have touted fossil-fuel extraction as a major U.S. job creator. [Bold added.]

This comparison is simply absurd. The “green jobs” BLS figure doesn’t count jobs in the green energy sector, but broadly counts “a. Jobs in businesses that produce goods or provide services that benefit the environment or conserve natural resources, b. Jobs in which workers’ duties involve making their establishment’s production processes more environmentally friendly or use fewer natural resources.”

If people are interested in traditional energies versus the “green” ones, we should focus on something much more narrow than what the BLS has used. It’s not obvious how to break the numbers down—for example, making electricity by burning coal is more “environmentally friendly” than using wood, but nobody has coal-fired power plants in mind when talking about “green goods and services.” In any event, if we look at the amount of electricity produced by fossil fuels versus renewables, we see that it’s not even close: 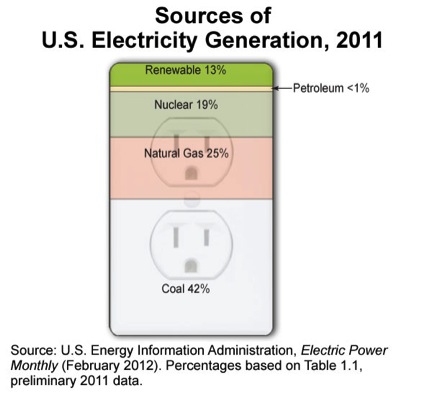 Some Interesting Elements of the “Green” Goods and Services Category

So we seen that the National Journal piece used the expansive GGS category to make an invalid comparison to the much more narrowly defined fossil fuel sector. But even if we put aside comparisons, and just look at the category of “green goods and services” itself, we find that the BLS has really stretched things to inflate the number.

Of the official 3.1 million jobs in 2010 falling in the BLS’ definition, consider the following elements listed in Table 3 of the BLS’ full press release:

As the above table indicates, the 3.1 million “green” goods and services don’t come solely from guys building solar panels. There are plenty of things thrown in there, such as nuclear power plants, people whose job it is to write grant proposals, federal and state government officials who enforce regulations, and even logging and petroleum & coal products manufacturing. Some of these are hardly what the layperson would think of as “green jobs.”

In the context of today’s political debates, “green jobs” is a pointless concept, as IER’s study from 2009 demonstrated. The government has no business picking winners and losers, whether green, blue, or yellow. One reason is that the government does a poor job of picking winners—just consider the debacles of Solyndra, Beacon Power, Evergreen Solar, Range Fuels, and many other businesses that received special favors from the government because they create “green jobs” but fail in the marketplace.  The market economy will direct resources to their most efficient niches, and jobs will grow in those sectors where labor can be most effectively deployed.

The government doesn’t need to second-guess where markets are creating jobs. If it really makes sense for “green” sectors to grow, then so be it; this is what will happen with normal market forces. After all, it didn’t take a manure-tax or a Model T s-subsidy to make the switch from horses and buggies to automobiles.

The BLS’ new category of “green goods and services” uses an arbitrary and expansive definition to inflate its numbers, but even if the accounting made sense, the category would still be useless for policymakers. If the government really wants to help with job creation, it should just get out of the private sector’s way.