Oil Production in the States

In 2011 oil production in Texas and North Dakota dramatically increased. According to the Energy Information Administration these big production gains (see chart below) were mainly the result of increased horizontal drilling and hydraulic fracturing. The top five oil producing states (Texas, Alaska, California, North Dakota, and Oklahoma) accounted for 56 percent of U.S. oil production in 2011.[i]

Texas produced 1,427 thousand barrels per day in 2011, 22 percent more than in 2010 and the  highest amount of oil production since 1997. This increase is primarily from the Eagle Ford shale formation in south Texas.[ii]

Alaska produced 563 thousand barrels per day in 2011, 6 percent less than in 2010. Oil production in Alaska has now fallen for the ninth year in a row. Alaska oil production is getting dangerously low for operation of the Trans Alaskan Pipeline System (TAPS), which was built to transport 2.1 million barrels per day. Some experts have estimated that flows down to 200 to 300 thousand barrels per day would be the minimum for viability. But even levels below 600 thousand barrels per day require modifications to make the pipeline economically viable to maintain oil production. The federal government could expedite opening the Naval Petroleum Reserve-Alaska (NPRA) or the Arctic National Wildlife Refuge (ANWR) to oil exploration to keep TAPS flowing, but both are federal properties and need Government approval. Offshore federal production could also contribute domestic oil to the pipeline, but access to these supplies has been severely limited by government actions and appeals and lawsuits by environmental pressure groups.  While the NPRA is technically open for drilling, oil production there is in need of an oil pipeline that must be approved by the Army Corps of Engineers to move the oil to the Trans Alaskan Pipeline. ANWR needs Congressional approval before drilling can occur on its 10.4 billion barrels of technically recoverable oil[iii] and the Obama Administration opposes opening ANWR.

California produced 538 thousand barrels per day in 2011, 3 percent less than in 2010. This is the lowest level of oil production in at least three decades. Drilling off the Atlantic and Pacific coasts, though now allowed with the lifting of the OCS moratorium in 2008, is not in the Department of Interior’s next five year lease plan.

The International Energy Agency (IEA) projects that North America will be the fastest growing oil-producing region outside of OPEC over the next five years.  IEA expects oil output in North America to increase 11 percent due to production from oil sands in Canada and shale formations in the United States, with oil production in the United States reaching 8.3 million barrels per day by 2016.[v]

Citi analysts believe that oil and gas production in North America will skyrocket in the next 8 years. They expect total liquids production in North America to double, with the United States overtaking both Russia and Saudi Arabia in oil production by 2020. Due to the increased energy production, 3.6 million new jobs would be created by 2020. Of those new jobs, about 600,000 would be in oil and gas production and 1.1 million would be in related industrial and manufacturing sectors. Unemployment is expected to decline by up to 1.1 percent and real GDP is expected to increase by 2.0 to 3.3 percent.[vi] 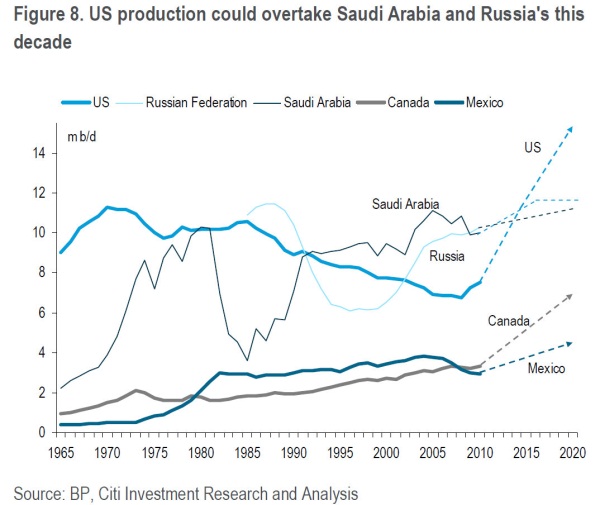 The only caveat is an important one for government officials and Members of Congress:

“Whether the increase in production results in the US reducing its imports or whether net exports grow doesn’t matter much to world balances. Either way, North America is becoming the new Middle East. The only thing that can stop this is politics — environmentalists getting the upper hand over supply in the U.S., for instance; or First Nations impeding pipeline expansion in Canada; or Mexican production continuing to trip over the Mexican Constitution, impeding foreign investment or technology transfers—in North America itself.”[vii]

Technology is at the forefront of oil production expansion in North America with hydraulic fracturing and horizontal drilling extracting oil from shale formations in the United States and mostly in-situ techniques for producing oil from oil sands in Canada. Forecasters see North America as the fastest growing source of increased oil production outside of OPEC for the remainder of this decade, bringing jobs and economic prosperity to North America. But data show that the production increases seen in 2011 were primarily on state and private lands. Just think how much more could be achieved if the federal government would allow more onshore and offshore federal lands to be available for oil production.

[vi] Business Insider, CITI: The US Energy Industry Is Going To Grow So Fast, It Will Spark A New ‘Industrial Revolution’, March 21, 2012, http://www.businessinsider.com/a-spike-in-us-oil-production-is-about-to-make-it-the-new-middle-east-2012-3#ixzz1qPC7VzRI