The amount of land burned by forest fires this year is a mere 52 percent of the average over the last 10 years, according to the National Interagency Fire Center. But because fires are exciting and produce ominous-looking pictures, President Obama’s chief political operative and climate change policy coordinator, John Podesta, recently sent out an email arguing that we must act on climate change because of forest fires.

Podesta’s email contains a video from John Holdren, the senior advisor to the president on science, that makes a number of claims that wildfires are being driven by climate change. But once we review the actual history and climate science, it shows that Podesta and Holdren’s claims amount to nothing more than political propaganda and the opportunistic use of regular events to press a political agenda.

Holdren begins by arguing that “climate change has been making the fire season in the United States longer, and on average more intense.” He goes on to claim that:

The influence of climate change on the wildfire regime comes not just from the higher summer temperatures and reduced summer soil moisture that go with global warming. Climate change is also bringing us more dead trees – kindling, in effect – killed by a combination of heat stress, water stress, and attacks by pests and pathogens that multiply faster in a warmer world.

This claim, however, is not supported by the latest report from the U.N.’s Intergovernmental Plan on Climate Change’s (IPCC) most recent assessment report. The IPCC finds that they cannot yet attribute insect outbreak or wildfire events to climate change. The IPCC states:

In summary, scholarship on climate change impacts, adaptation and vulnerability has grown considerably since the AR4 in North America, particularly in Canada and the US. It is possible now not only to detect and attribute to anthropogenic climate change some impacts such as changes in extreme precipitation, snowmelt and snowpack, but also to examine trends showing increased insect outbreaks, wildfire events and coastal flooding. These latter trends have been shown to be sensitive to climate, but, like the local climate patterns that cause them, have not yet been positively attributed to anthropogenic climate change (see Figure 26-1).  [Bottom of page 7, bold added.]

In other words, between the release of the Fourth Assessment Report (AR4) (2007) and the latest, Fifth Assessment Report (AR5) (2013), new research has allowed scientists to detect changes in extreme precipitation, snowmelt, and snowpack, and moreover to conclude that these changes are at least partially driven by human-caused climate change. Researchers have also documented trends in increased insect outbreaks, WILDFIRE EVENTS, and coastal flooding. Although these trends are of course sensitive to climate, the research studied in the AR5 cannot yet say that these trends (including wildfire events) have been caused by human-made climate change.

Unlike Holdren and Podesta, the IPCC correctly points out the biggest issue with forest fires in the United States—federal land management policies.

In other words, for decades, the United States has suppressed fires in forests. The problem with all-out fire suppression is it has created conditions in the forests including overgrowth of brush that now lead to more fires and more intense fires. The forests of the southwestern United States, for example, have been radically altered by forest management (really mis-management). Until the late 1800s, these forests would burn every two to five years, but the fires were light and kept the forests open and park-like with a scattering of large trees. In the late 1800s, there were about 17–20 pines per acre but because of fire suppression, today there are about 800 trees per acre—a 3900 percent increase.

Fire suppression was possible for decades when there were fewer trees per acre, but now that there are so many more trees and logging activities have been curtailed, suppression is no longer possible. The result of forest management and political decisions about timber management is why we see an increase in acres burned over the last couple decades.

Holdren tries to associate the increase in fires with climate change, while omitting the role that forest management has played. Holdren states, “In the Western United States the average annual area burned by large wildfires has increased several-fold in recent decades. The evidence is strong that climate change is responsible, at least in part, for this increase.”

This argument does not make sense when we consider a longer time horizon. The following is a chart from Auburn professor David B. South’s 2014 testimony to the Environment and Public Works Committee (available at: http://www.epw.senate.gov/public/index.cfm?FuseAction=Files.View&FileStore_id=3d0636c4-7ecd-44be-95aa-84973e50b7dd ). The chart shows that there were 4 to 5 times as many wildfires in the U.S. in the 1920s and 1930s as today. There have been an increase from the 1980s, but the number of fires today is dwarfed by the number of fires a hundred years ago: 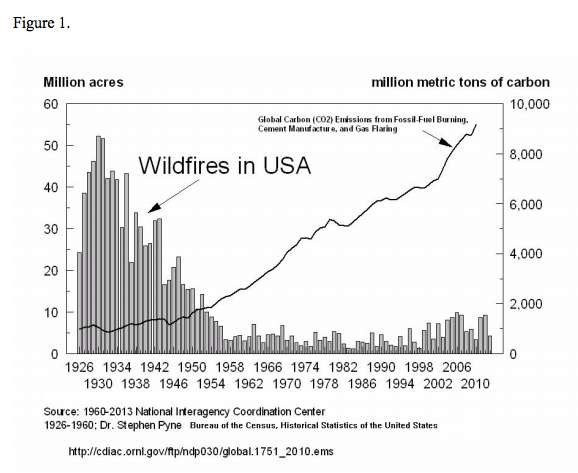 The biggest difference, however, is not climate change, but management. It appears that more fires were allowed to burn, or were started, in the 1920s and 1930s, than today. But, because the forests had a lower “fuel load” (ie. the number of trees in ponderosa forests were closer to 20 pines per acres instead of 800+ pines per acre) the fires weren’t as intense as they are today.

The problem is that Holdren fundamentally does not understand wildfire. He states, “Wildfires of course are dangerous to human life and health, costly in terms of property loss, and generally harmful to ecosystems.” It is true that wildfires can be harmful, but more importantly, fire is a part of nature; and for decades, humans have radically altered ecosystems by taking fires out of the ecosystem. In fact, many forests are fire-adapted, and actually require fires to be healthy.

The White House’s political operatives – Podesta and Holdren – would like to blame forest fires on climate change, but there is not much evidence that climate change is driving wildfires. The more likely culprit is indeed humans, but it is human management that has removed fire out of fire-adapted ecosystems. The White House has exacerbated the flawed management of our forests, further contributing to fire troubles. Yet at the same time, they want to blame fires on climate change. They can’t have it both ways.

Courts Side with Big Govt. on FERC Order 1000