A recent Politico story unwittingly pulled the curtain back on the ongoing agitation for massive government action on climate change. The piece was titled, “Paris talks hinge on money,” and confirmed my earlier IER post outlining the huge spigot of tax dollars that pressure groups are trying to unleash.

In the present post, I want to put the alarming projections in context, but also make sure American readers understand just how much money is at stake.

“Let the Bidding Start At $50 Billion”

The Politico piece explains that in order for the upcoming Paris negotiations (which I explain here) to have any chance of success, the richer nations will have to agree to transfer huge sums of money to the poorer nations. The fans of such a deal think this makes perfect sense, since (in their worldview) the richer nations have benefited from a century of unrestricted fossil fuel use, whereas the poorer nations tend to suffer the most from the changing climate.

For a specific example of the numbers being discussed, consider this excerpt from the Politico piece:

The looming questions are what happens after 2020, including whether to provide support in cash, technology or skills, according to an EU source briefed on the talks.

Lies Craeynest of global advocacy group Oxfam is adamant: “Even if we succeed to keep global warming below 2 degrees, the poorest countries may face costs due to climate impacts in the range of $50 billion per year by 2025-2030. A climate deal at the end of this year is only within reach if they are certain to get extra support to adapt to a changing climate.” [Bold added.]

That is an astonishing figure. The most immediate takeaway for American readers is to realize just how much money will be on the table at the upcoming Paris talks.

Yet beyond that crucial fact, let’s put the Oxfam prediction in context using “official” sources of information on climate change and its impacts.

There are two possible interpretations of the Oxfam claim. First, is the person arguing that global warming might hit 2 degrees Celsius by the year 2025-2030, and thus cause $50 billion in damages to poor regions?

Or, was the person merely saying that on the trajectory of a cumulative 2 degrees warming (perhaps by 2100), that the warming as of 2025 would nonetheless cause $50 billion in damages?

Either way, the claim is problematic. First, we’ll go with the first interpretation. If the Oxfam claim is that we will hit 2 degrees of warming by 2025, then this would require a drastic departure from recent history.

Consider: Right now NASA is telling us that the globe in 2015 is only 0.8 degrees Celsius hotter than it was back in 1880. (That’s 135 years ago.) So should we expect an additional 1.2 degrees of warming in the next ten years? For comparison, the NASA data also inform us that in the prior decade—in other words, from 2005 to 2015—the globe warmed a mere 0.1 degrees, even though atmospheric concentrations of carbon dioxide have been steadily growing all along.

To be sure, this issue of “the pause” leads to all sorts of arguments, because global temperatures are volatile and we can choose our starting points in order to paint a different picture. For example, if we choose 1998 (which was unusually warm) as our starting point, then from 1998 to 2015 the globe has warmed 0.03 degrees—a virtual standstill over a 17-year stretch, despite very large emissions of carbon dioxide.

But, if instead we go back to 1995 as our starting point, then the globe has warmed a bit shy of 0.4 degrees over the prior twenty years.

Of course, when it comes to the global climate, past performance is no guarantee of future results. I think it’s useful, however, to point out that under one interpretation of the Oxfam quotation—in which we assume the 2 degrees of warming occurs by 2025—we would need to assume a rapid reversal of the trend we’ve seen thus far. Such projections are not based on actual observations, but instead derive from computer models that have been wildly overpredicting actual warming so far.

What If We’re Moving Along a Trajectory of Long-Run 2°C Warming?

To repeat, it’s possible that the Oxfam representative simply meant that on the trajectory that yields global warming of 2 degrees eventually—perhaps by the year 2100—then there would still be the huge stipulated damages by 2025.

But the problem with this interpretation is that according to “official” estimates, the damages just aren’t high enough, for modest amounts of global warming.

For starters, here is a graphic taken from the Obama Administration’s Working Group on the Social Cost of Carbon, showing the projections from three leading computer models that it used to estimate the damages of climate change: 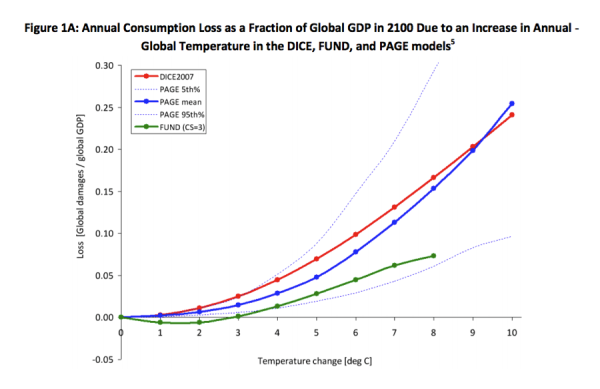 As the graph shows, one of the models—Richard Tol’s FUND model, indicated by the green line—shows net benefits to humanity from global warming up through 3 degrees Celsius. The other two models (red and blue lines) show damages for any amount of warming, but they are very slight for modest temperature hikes.

If we give equal consideration to these different projections, it should be clear that it would be hard to use the Obama Administration’s chosen projections of climate change damages in order to yield worrisome aggregate global harms from warming of 2 degrees or less. And if we consider global warming in the vicinity of 1 degree—which is the relevant criterion for the timeframe of 2025-2030—then we are arguably still in the region of net global benefits (again, if we average the results of the three models).

Back in 2009 I published an article in The Independent Review that critically evaluated William Nordhaus’ DICE model—again, one of the leading computer simulations that would later be chosen by the Obama Administration to estimate the social cost of carbon. Although the numbers will have changed in the interim, it’s useful to look at a table I reproduced (on page 209 of my journal article) from estimates made by Nordhaus (and his co-author Boyer) in the year 1999: 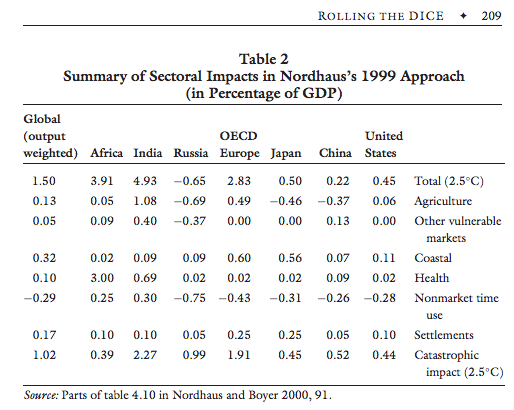 Note that the table above is based on warming of 2.5 degrees, which would carry far worse impacts than for the modest warming that we will likely experience by the year 2025. The top row sums the impacts from the various sectors in the lower rows. We see that Africa, for example, would experience a total GDP loss of 3.91 percent for 2.5°C of warming, while India would lose 4.93 percent and Russia would actually benefit from warming (denoted by the negative sign in front of the 0.65).

Using current estimates of GDP, the above figures are in the same ballpark as the Oxfam representative’s claims. For example, India has a GDP of about $2.3 trillion (using market exchange rates), and so if it experiences a hit of 1 percent of GDP, that works out to $23 billion in damages for that country alone.

But to repeat, the above table was calibrated for an assume warming of 2.5 degrees, which is far lower than what the earth will likely experience by the year 2025.

Furthermore, I should point out that a big chunk of the estimated damages in the table above come from the bottom row, labeled “Catastrophic Impact.” These figures were not based on actual calculations, but instead come from Nordhaus’ survey of various experts who simply gave him numbers (which he then inflated because he thought the evidence had moved since he first administered the survey). I give the details on pages 206-208 of my paper, but the important point for our purposes is that much of the damages depicted in the table above are themselves guesstimates as opposed to precise modeling. It was Nordhaus (and his co-author)’s way of plugging in the fact that something bad could go wrong, at a warming of 2.5 degrees, even though it was unlikely to occur.

Americans should realize just how much money is at stake in the upcoming UN climate treaty negotiations in Paris. Advocates for poorer nations are wrangling for commitments of $50 billion annually. The debates over climate change policy thus involve more than, say, a “revenue-neutral” carbon tax that will make gasoline and electricity more expensive. It can’t be “revenue-neutral” if tens of billions (depending on the U.S. share of the pot) are being siphoned away internationally.

Beyond the danger to U.S. taxpayers, we should also keep these alarming projections in context. Using the very same models that the Obama Administration picked to estimate the effects of climate change, we can see that the impacts are not nearly as alarming as the public has been led to believe.

As usual, the media portray an exaggerated picture of the threat of climate change, while prepping the public to pay for a huge gravy train in various “responses.”

Shell's Permit to Drill is a Victory for American Energy Security

Methane Regs Are About Power, Not Pollution